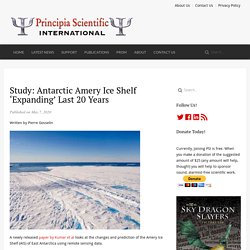 The scientists found that the ice shelf is prograding (expanding), and not breaking apart like some alarmist scientists feared earlier. Wikipedia tells that in December 2006, “enormous cracks” had been forming for over a decade at a rate of three to five meters a day – possibly due to global warming – but researchers later said it was too early to attribute the phenomenon to global warming because of the “possibility of a natural 50-60 year cycle being responsible.” First results from NASA’s ICESat-2 mission map 16 years of melting ice sheets. University of Washington Using the most advanced Earth-observing laser instrument NASA has ever flown in space, a team of scientists led by the University of Washington has made precise measurements of how the Greenland and Antarctic ice sheets have changed over 16 years. 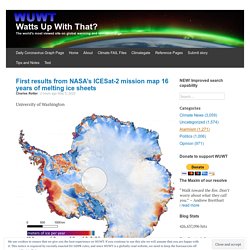 In a new study published in the journal Science on April 30, scientists found the net loss of ice from Antarctica, along with Greenland’s shrinking ice sheet, has been responsible for 0.55 inches (14 millimeters) of sea level rise to the global ocean since 2003. In Antarctica, sea level rise is being driven by the loss of the floating ice shelves melting in a warming ocean. The ice shelves help hold back the flow of land-based ice into the ocean. The findings come from the Ice, Cloud and land Elevation Satellite 2 (ICESat-2), which was launched into orbit in fall 2018 and began taking detailed global elevation measurements, including over Earth’s frozen regions. 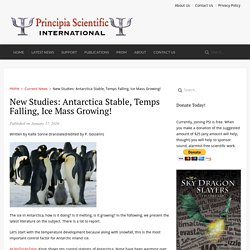 Gosselin) Scientists Baffled As Antarctic Ice Goes From Record High To Record Low. Decades of expanding sea ice in Antarctica have been wiped out by three years of sudden and dramatic declines, leaving scientist puzzled as to why the region has flipped so abruptly. 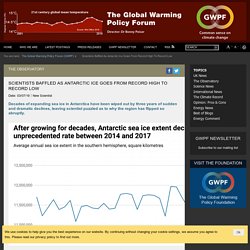 A new satellite analysis reveals that between 2014 and 2017 sea ice extent in the southern hemisphere suffered unprecedented annual decreases, leaving the area covered by sea ice at its lowest point in 40 years. The declines were so big that they outstripped the losses in the fast-melting Arctic over the same period.

“It’s very surprising. We just haven’t seen decreases like that in either hemisphere,” says Claire Parkinson at NASA’s Goddard Space Flight Center, who undertook the analysis. However, researchers cautioned against pinning the changes on climate change and said it was too early to say if the shrinking is the start of a long-term trend or a blip. Antarctic sea ice is declining dramatically. A 40-y record reveals gradual Antarctic sea ice increases followed by decreases at rates far exceeding the rates seen in the Arctic Claire L. 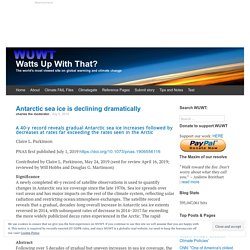 Parkinson PNAS first published July 1, 2019 Contributed by Claire L. Parkinson, May 24, 2019 (sent for review April 16, 2019; reviewed by Will Hobbs and Douglas G. Ooops! New NASA study: Antarctica isn't losing ice mass after all ! From the “settled science” department and former chief alarmist Jay Zwally, who for years had said the Arctic was in big trouble (only to have his prediction falsified), comes this Emily Litella moment in climate science: “Never mind!”. 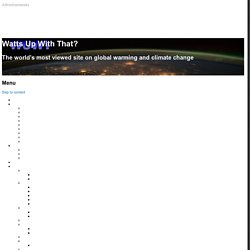 Curiously, WUWT reported back in 2012 about an ICEsat study by Zwally that said: ICESAT Data Shows Mass Gains of the Antarctic Ice Sheet Exceed Losses. I surmise that with the publication of this second study, the original is now confirmed. I suppose John Cook will have to revise his “Denial 101” video on Antarctica now. This map shows the rates of mass changes from ICESat 2003-2008 over Antarctica. The Increasing Surface Mass Balance of Two Antarctic Glaciers. Paper Reviewed Engel, Z., Láska, K., Nývlt, D. and Stachon, Z. 2018. 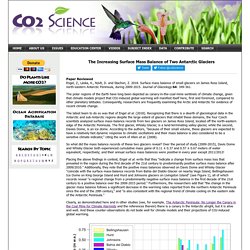 Surface mass balance of small glaciers on James Ross Island, north-eastern Antarctic Peninsula, during 2009-2015. Journal of Glaciology 64: 349-361. The polar regions of the Earth have long been depicted as canary-in-the-coal-mine sentinels of climate change, given that climate models project that CO2-induced global warming will manifest itself here, first and foremost, compared to other planetary latitudes. Consequently, researchers are frequently examining the Arctic and Antarctic for evidence of recent climate change.

The latest team to do so was that of Engel et al. (2018). NASA glaciologist Jay Zwally puts the hammer down: ‘Antarctica is gaining ice’ A new paper about to be in press, comes at the end of a flurry of papers and reports published this week that claims Antarctica was losing ice mass. 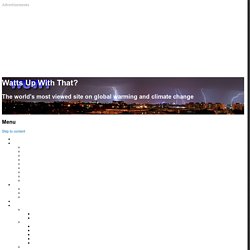 Zwally says ice growth is anywhere from 50 gigatons to 200 gigatons a year. NASA glaciologist Jay Zwally says his new study will show, once again, the eastern Antarctic ice sheet is gaining enough ice to offset losses in the west. By Michael Bastasch Is Antarctica melting or is it gaining ice? A recent paper claims Antarctica’s net ice loss has dramatically increased in recent years, but forthcoming research will challenge that claim. The "Alarmist Gone Wild" Perspective of the Increase in Antarctic Snowfall.

Three days ago, Anthony posted a very factual summary of the recent EGU paper on the increase in Antarctic snowfall over the past 200 years: Big increase in Antarctic Snowfall helps to prevent sea level rise Earther, the folks who reported that Gorebal Warming is deforming the seafloor, have an interesting perspective of the EGU publication (including defamatory remarks about Anthony and WUWT in the first comment)… SCIENCE Maddie StoneMonday 3:50pm Filed to: ICE ON THIN ICEThe world’s largest hunk of ice, the Antarctic ice sheet, holds enough frozen water to put cities like Miami several hundred feet under. 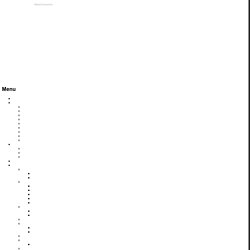 How much Antarctica shrinks in the future will depend on the balance between what’s melting away, and what’s being added when it snows.A new study published in the journal Climate of the Past has some (small) good news as far as snowfall is concerned: it’s going up. Taking down the latest Washington Post Antarctic scare story on 6x increased ice melt. Antarctica's contribution to sea level rise was mitigated by snowfall. By Maria-José Viñas, NASA’s Earth Science News Team A new NASA-led study has determined that an increase in snowfall accumulation over Antarctica during the 20th century mitigated sea level rise by 0.4 inches. 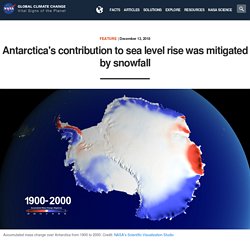 However, Antarctica’s additional ice mass gained from snowfall makes up for just about a third of its current ice loss. “Our findings don’t mean that Antarctica is growing; it’s still losing mass, even with the extra snowfall,” said Brooke Medley, a glaciologist with NASA Goddard Space Flight Center in Greenbelt, Maryland, and lead author of the study, which was published in Nature Climate Change on Dec. 10. IPCC gate Du Jour – Antarctic Sea Ice Increase Underestimated by 50% Several errors have been recently uncovered in the 4th Assessment Report (AR4) of the Intergovernmental Panel on Climate Change (IPCC). These include problems with Himalayan glaciers, African agriculture, Amazon rainforests, Dutch geography, and attribution of damages from extreme weather events.

More seem to turn up daily. Most of these errors stem from the IPCC’s reliance on non-peer reviewed sources. Even Gooder News!!! East Antarctic Ice Sheet (the big one) Remained Stable Throughout the Pliocene! Inconvenient: Antarctica’s Ice Sheet May Be More Durable Than We Thought. On the same day that WaPo and other alarmist media outlets were wailing about a small loss in Antarctic ice balance, another study came out. This study found that the East Antarctic Ice Sheet has survived higher temperatures than we are experiencing now. Mt. Erebus rising above the ice-covered continent. Credit: Ted Scambos & Rob Bauer, NSIDC From PM: Summary: Scientists studied the Pliocene epoch, which happened a few million years ago.Temperatures were a little warmer then, so the epoch could be a good preview of a warmer Earth.They found Antarctic ice was more prevalent back then than we’d believed.

Another Antarctic sea ice record set – but excuses abound. There’s an information war on the recent Antarctic sea ice records Guest essay by Frank Lansner Today Cryosphere reports 2,112 million km2 more sea ice around Antarctica than normal. Fig 1 Reality is that we right now have an area matching the size of Greenland of extra sea ice floating around Antarctica. The nightmare for the global warming believers is if the growing ice around Antarctica should be linked to cooling, and so: 1) Some Re-analysis papers and more have been made showing that the ocean around Antarctica is not cooling (as original data suggests) but is in stead warming fast. 2) Several mechanisms have been suggested to argue how come ice can grow so much faster when in fact the water is supposed to have warmed up.

Remember that claim from NSIDC and Walt Meier that the Antarctic ice expansion was due to a ‘processing error’? …never mind. NASA scientist says that error has long since been corrected and the increase in sea ice in Antarctica is real. As readers know, we announced this paper (which was under embargo): Claim: Antartica record high sea ice partially an artifact of an algorithm Cato’s Patrick Michaels and Chip Knappenberger said the whole thing was not an ice mountain, but a molehill: Of mountains, molehills, and noisy bumps in the sea-ice record writing: “If the reason that the shift was undetected is because the data is so noisy, how important can it be?” “The change since the turn of the century is about 1.3 million square kilometers, a mountain of ice,” “The step change is about 200,000, a molehill.

That doesn’t sound like ‘much’ to us.” The Daily Caller’s Michael Bastasch noted that other scientists agree. Ross Ice Shelf Freezing, Not Melting: “It blew our minds.” Guest post by David Middleton Scientists will leave sensors in the hole to better understand the long-term changes in the ice, which may have big implications for global sea level.By Douglas Fox PUBLISHED FEBRUARY 16, 2018 Scientists have peered into one of the least-explored swaths of ocean on Earth, a vast region located off the coast of West Antarctica.[…]SURPRISING FINDS The surprises began almost as soon as a camera was lowered into the first borehole, around December 1. The undersides of ice shelves are usually smooth due to gradual melting. But as the camera passed through the bottom of the hole, it showed the underside of the ice adorned with a glittering layer of flat ice crystals—like a jumble of snowflakes—evidence that in this particular place, sea water is actually freezing onto the base of the ice instead of melting it.

From the “you really should get your stories straight” department. OK, here is press release #1 from the UNIVERSITY OF SOUTH FLORIDA (USF HEALTH) Antarctic Ice Mass Controversies. Like many others, I was interested in the recent controversy arising from findings of Zwally et al 2015 that there had been ice mass gain gain of ~112±61 Gt/year over 1992-2001 and ~82±25 Gt/year over 2003-2008.

Zwally’s findings obviously contradict a widely held contrary belief, expressed, for example, in IPCC AR5’s assertion there was “high confidence” that the Antarctic Ice Sheet had been losing mass for the prior two decades and that the rate of loss had “likely increased” to ~147±75 GT/year over 2002-2011 or in NASA’s widely cited statement that “the continent of Antarctica has been losing about 134 billion metric tons of ice per year since 2002”.

I had no prior interest in the literature, but was intrigued by the dramatic contrast between Zwally and IPCC on such a widely covered topic. This quickly led into a voluminous technical literature, which is the subject of today’s post. Figure 1. Zwally et al 2015 Figure 6b, showing IceSat dH/dt for 2003-2008. AR4 to 2011.