Hell is Other People Chapter 1, an alex rider fanfic. This is the result of a long conversation 'tween me and Von. 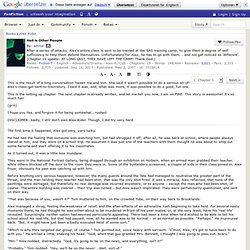 She said it wasn't possible to do a serious all-of-alex's-class-get-sent-to-train! Story. I said it was, and, what was more, it was possible to do a good, fun one. This is the setting up chapter. The next chapter is already written, and let me tell you now, I am on FIRE. (grin) I hope you like, and forgive it for being somewhat...rushed. There's No Such Thing as Heroes Chapter 2, an alex rider fanfic. Chapter Two Miss Jessica Collins one of the English teachers at Brookland Comprehensive was sat at home in the cream living room of her small apartment with a stack of papers to mark. 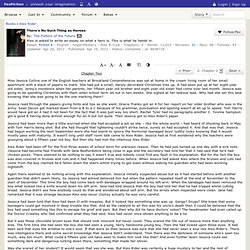 She had put a small, barely decorated Christmas tree up. When the Lie Falls Apart, an alex rider fanfic. "COBRA meetings are only called in the worst of times. 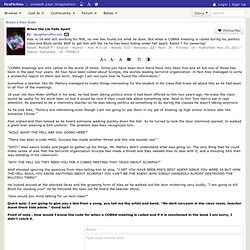 Since you have been born there have only been five and all but one of those has been in the past four years. All four have been called about Scorpia, the worlds leading terrorist organization. In fact Alex managed to write a wonderful report on them last term, though I am not sure how he found the information. " Somehow a teacher like Mr. Mallory managed to make things interesting for the student in his class that knew all about this as he had been to all four of the meetings. 18 year old Alex Rider shifted in his seat, he had been taking politics since it had been offered to him two years ago. As he told Alex, "Politics are interesting even though I am not going to use them in my job of blowing up high school science labs like someone I know. "

Classified, an alex rider fanfic. This is an AU in which a teacher accidentally finds out what Alex Rider became. 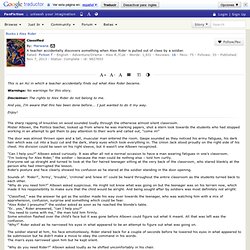 Warnings: No warnings for this story. Disclaimer: The rights to Alex Rider do not belong to me. And yes, I'm aware that this has been done before... I just wanted to do it my way. Enjoy! The sharp rapping of knuckles on wood sounded loudly through the otherwise almost silent classroom.Mister Albown, the Politics teacher, looked up from where he was marking papers, shot a stern look towards the students who had stopped working in an attempt to get them to pay attention to their work and called out, "come in! " The door was almost thrown open and a tall, muscular man entered the room. An Establishment, an alex rider fanfic. An Establishment i. 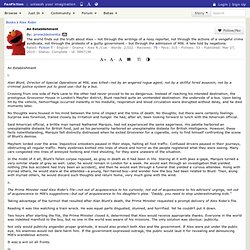 Alan Blunt, Director of Special Operations at MI6, was killed—not by an angered rogue agent, not by a skillful hired assassin, not by a criminal justice system put to good use—but by a bus. Crossing from one side of Park Lane to the other had never proved to be so dangerous. Instead of reaching his intended destination, the prestigious Grosvenor House in London's Mayfair district, Blunt reached quite an unintended destination: the underside of a bus. Upon being hit by the vehicle, hemorrhage occurred instantly in his medulla; respiration and blood circulation were disrupted without delay, and he died moments later. No thoughts were housed in his mind between the time of impact and the time of death. Said American official, a brittle man named Nathaniel Marquis, had not experienced the same eagerness. Mayhem lorded over the area. In the midst of it all, Blunt's fallen corpse reposed, as gray in death as it had been in life.

A Run in Chapter 1, an alex rider fanfic. A what? 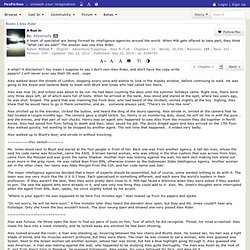 A disclaimer? You mean I suppose to say I don't own Alex Rider, and don't have the copy write papers? I will never ever say that! Oh wait...oops. Between a Rock and a Hard Place Chapter 1: Answers, an alex rider fanfic. This is an idea that hit me when I was sitting at home one Saturday night, bored out of my mind. 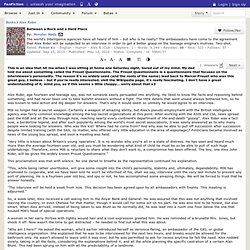 My dad told me about something called the Proust Questionnaire. The Proust Questionnaire is a questionnaire that focuses on the interviewee's personality. The reason it's so widely used (and the roots of the name) lead back to Marcel Proust who was this great guy, I believe – but if you're really interested, visit the Wikipedia page, it's really fascinating. I don't have a great understanding of it, mind you, so if this seems a little choppy… sorry about that x3. Alex Rider, and the Rorsch test, an alex rider fanfic.

AN: This is a little one-shot story thing. 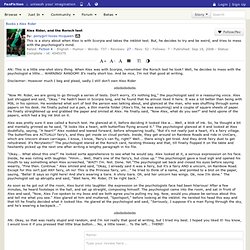 When Alex was with Scorpia, remember the Rorsch test he took? Well, he decides to mess with the psychologist a little... WARNING! RANDOM! It's really short too. Back To Hell, For Good? Chapter 1: Choice is a misconception, an alex rider fanfic. Information and changes Hello readers, The story starts after the bold writing on this page. 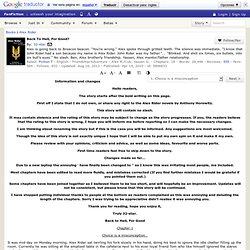 First off I state that I do not own, or share any right to the Alex Rider novels by Anthony Horowitz. This story will contain no slash. It may contain violence and the rating of this story may be subject to change as the story progresses. The Borneo Option, an alex rider fanfic. I do not own Alex Rider. 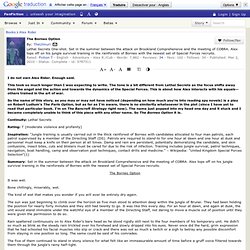 Enough said. This took so much longer than I was expecting to write. The tone is a bit different from Lethal Secrets as the focus shifts away from the angst and the action and towards the dynamics of the Special Forces. This is about how Alex interacts with his equals— others trained in the art of war. So the name of this story, as you may or may not have noticed (depending on how much you're into reading spy novels) is a play on Robert Ludlum's The Paris Option, but as far as I'm aware, there is no similarity whatsoever in the plot (since I have yet to read that particular book.

This has no connection to ThingsChange. The Boy With Nothing to Lose Chapter 7, an alex rider fanfic. Alex was laughing on the inside as he watched Blunt rant on about how immature he was and how childish Nat was in the same breath. Personally Alex didn't think there was much difference between the two but then he had never been too good in English class. He enjoyed the view of Blunt's normally impassive face going red with anger and rage. He looked towards Nat who was standing beside him at attention but when he saw her expression, he unsuccessfully tried to force down a giggle. Ah, so Alex has finally made Blunt yell. Now congratulations are in order! "Alan I really don't get what's made you so upset! Nat finished with an overly cheery tone. Agent Rider, an alex rider fanfic.

Agent Rider All the students of Brookland who were sixteen and older in Brookland had been allowed to go to the Brecon Beacons SAS training facility in Wales. This included all two and one pupils of Year Thirteen, one hundred and ninety-eight of Year Twelve, and one hundred and three of the two hundred and thirteen Year Elevens. Seventeen teachers had to accompany them. Masked Dancers Chapter 1: Prologue, an alex rider fanfic. Hello people! I'm back with the edited prolouge for Masked Dancers! Chapter one is in progress and I think the old chapter one is going to be something like chapter two or three :O I have to give a huge thank you to ShibuNoNeko for their wonderful reviews on every chapter and for their awesome tips :) I also want to give another HUGE thank you to AnyAlways for being such a great friend! My last thanks goes to LaviLane, my ever faithful, slash-loving BETA! From Brookland to Brecon Adopted-COMPLETE- Chapter 1, an alex rider fanfic.

From Brookland to Brecon Revised~ Adopted~ Fallenqueen2: So a huge thanks to Agentcherub for letting me adopt this story and repost it with a few tweaks and going on with it my way :) Disclaimer: Unfortunately I am not the amazing Anthony Horowitz so i don't own Alex Rider and all his skill. Close Protection, of a Sort Chapter 1: In from the Cold or Not, an alex rider fanfic. A/N: Hi. This is my first fic in the AR universe (I've written for Tamora Pierce before.) Happily Never After Chapter 1: And They, an alex rider fanfic. Warnings: Profanity. Tongue-in-cheek. Brief mention of past relationship. All in the Faculty Chapter 1: Paid Vacation, an alex rider fanfic. All in the Faculty. Count on Me Chapter 1: The Call, an alex rider fanfic. It was the middle of the school week, a hot sunny Wednesday after a boring lunch spent chewing brainlessly on a day old loaf of bread, a steal from the local bakery at half price, and obnoxiously slurping cold tea from an old, banged up sippy cup, because all the travel mugs were either lost or moldy.

Good Intentions, an alex rider fanfic. It was a hot, sunny Tuesday, the kind of heat that made you sweat in an air conditioned room and ensured that everyone, even the teachers, were breaking the dress code and wearing tank tops and sandals, the girls in short shorts to boot. A lunch break in which only few braved the heat and played in the sun while the rest hid in shade and tried to gather their strength for the subsequent classes passed slowly and torturously. When the bell rang it was with sighs and exhalations of relief that many went inside to air conditioned classrooms.

Midnight Run, an alex rider fanfic. Midnight Run A/N: So, I've been in my mom's place for a week now, enjoying myself and managing to survive on just a few minutes of time on her computer a day. Now, I finally get my laptop to connect to her internet and I go off to look for my 'running projects' USB so I can get back on track, and you know what I find when I look in my bag? Buttons and Ties? Gone. Midday Brawl, an alex rider fanfic. Midday Brawl Summary: Sequel to Midnight Run.