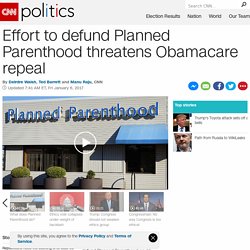 Congressional Republicans have tried for years to zero out all federal funding for Planned Parenthood because the group provides abortion services. The fight over Obamacare helped trigger a 16-day government shutdown in 2013, and Democrats and President Barack Obama insisted any Planned Parenthood provision targeting the group be removed from a bill to fund federal agencies. Further complicating matters for Senate GOP leaders is Sen. Rand Paul, R-Kentucky, who announced this week he plans to vote against the Obamacare repeal legislation because the underlying budget measure it is attached to doesn't balance and adds to the deficit. 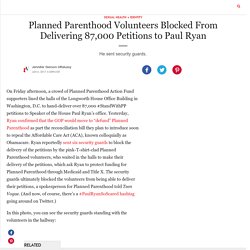 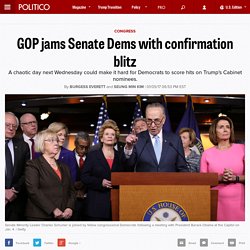 But they don’t care. Story Continued Below Senate Majority Leader Mitch McConnell’s conference has scheduled six Cabinet-level confirmations hearings for next Wednesday, Jan. 11, the same day the chamber will likely slog through an all-night vote-a-rama on a budget and the president-elect will give his first press conference in six months. It’s a disastrous schedule for Senate Democrats. Michelle Obama gives final speech as First Lady. In her final speech as First Lady of the United States, Michelle Obama spoke about the values of hard work and a good education. 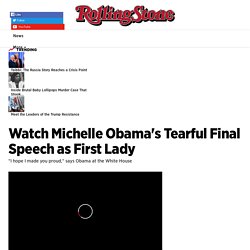 With those tools, Obama said, "you might even become president. " President Barack Obama delivers farewell speech in Chicago. US deploys troops to Poland, Putin unenthused. The Kremlin has hit out at the biggest deployment of US troops in Europe since the end of the cold war, branding the arrival of troops and tanks in Poland as a threat to Russia’s national security. 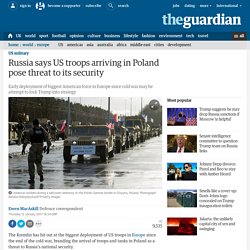 The deployment, intended to counter what Nato portrays as Russian aggression in eastern Europe, will see US troops permanently stationed along Russia’s western border for the first time. Trump briefed on claims of Russian efforts to compromise him. The allegations were presented in a two-page synopsis that was appended to a report on Russian interference in the 2016 election. 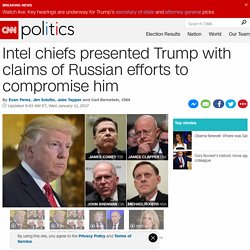 The allegations came, in part, from memos compiled by a former British intelligence operative, whose past work US intelligence officials consider credible. The FBI is investigating the credibility and accuracy of these allegations, which are based primarily on information from Russian sources, but has not confirmed many essential details in the memos about Mr. Trump. The classified briefings last week were presented by four of the senior-most US intelligence chiefs -- Director of National Intelligence James Clapper, FBI Director James Comey, CIA Director John Brennan, and NSA Director Admiral Mike Rogers. Trump Refuses to Take CNN Question in Bizarre Press Conference.

During a combative, and at times bizarre, press conference in Trump Tower on Wednesday morning—his first since July 2016—Donald Trump largely avoided giving specific answers, using much of his time to berate the news media, specifically “left-wing blog” BuzzFeed. 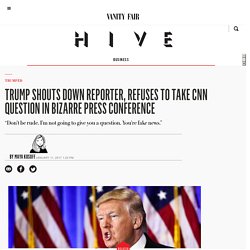 After turning over the podium to Trump attorney Sheri Dillon, who attempted to explain exactly why and how the president-elect will navigate his business conflicts of interest once he takes office, Trump returned to take more questions from the media, in a series of exchanges that quickly turned explosive. After taking and mostly punting on questions from several reporters on his campaign’s ties to Russia and his plans for Obamacare, Trump turned to attacking BuzzFeed News again, calling the media outlet a “failing pile of garbage” for publishing an unverified dossier on Tuesday alleging that Russia has extensive compromising personal and financial information about him. “Can you give us a question, Mr.

President-elect?” Republican governors resist rush to scrap Medicaid expansions under Obamacare. Republican governors, while remaining publicly committed to ending Obamacare, are telling their congressional delegations that repealing the health-care law without an adequate replacement would ravage budgets and swamp hospitals with the uninsured. 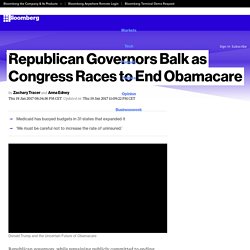 The leaders of states such as Ohio, Nevada, Idaho and even Alabama are urging a heavy dose of caution, according to statements and letters solicited by U.S. House Majority Leader Kevin McCarthy. 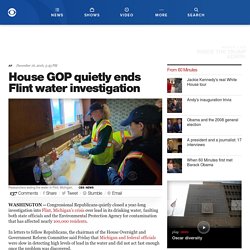 In letters to fellow Republicans, the chairman of the House Oversight and Government Reform Committee said Friday that Michigan and federal officials were slow in detecting high levels of lead in the water and did not act fast enough once the problem was discovered. The committee findings offer no new information and essentially summarize what emerged during several high-profile hearings earlier this year.

“The committee found significant problems at Michigan’s Department of Environmental Quality and unacceptable delays in the Environmental Protection Agency’s response to the crisis,” wrote Rep. Trump threatens Chicago w/feds unless "carnage" ends. He tweeted about the shootings there in early January, saying at the time as President-elect: "If Mayor can't do it he must ask for Federal help. 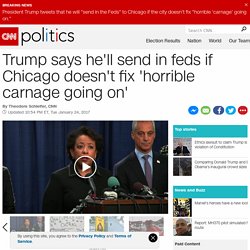 " Tuesday night he wrote, "If Chicago doesn't fix the horrible 'carnage' going on, 228 shootings in 2017 with 42 killings (up 24% from 2016), I will send in the Feds. " The Chicago Police Department tells CNN there have been 38 homicides and 182 shooting incidents in the city so far in 2017. Chicago Police only report homicides.

They are not necessarily all shooting deaths. Trump has previously encouraged Chicago Mayor Rahm Emanuel to ask for federal assistance. Flashy executive actions defy common sense. President Donald Trump’s team made little effort to consult with federal agency lawyers or lawmakers as they churned out executive actions this week, stoking fears the White House is creating the appearance of real momentum with flawed orders that might be unworkable, unenforceable or even illegal. The White House didn’t ask State Department experts to review Trump’s memorandum on the Keystone XL pipeline, even though the company that wants to build the pipeline is suing the U.S. for $15 billion, according to two people familiar with the matter. Story Continued Below Defense Secretary James Mattis and CIA Director Mike Pompeo were “blindsided” by a draft order that would require agencies to reconsider using interrogation techniques that are currently banned as torture, according to sources with knowledge of their thinking.

The White House did not respond to a request for comment. But the process is playing out chaotically both inside the White House and throughout the federal government. 2017 Executive Orders, Memorandum, Proclamations. Trump’s executive actions as of 1/25/17. President Donald Trump has spent his first days using his executive authority to rewrite American policy and undo a string of decisions made by former president Barack Obama. Here’s a running list of the new president’s executive actions: Bannon Is Given Security Role Usually Held for Generals. WASHINGTON — The whirlwind first week of ’s presidency had all the bravura hallmarks of a Stephen K. Bannon production. It started with the doom-hued inauguration homily to “American carnage” in United States cities co-written by Mr. Prime minister's asks Fox News to retract 'misleading' tweet.