Eliot A. Cohen Responds to Donald Trump's First Week - The Atlantic. I am not surprised by President Donald Trump’s antics this week. 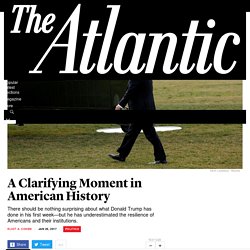 Not by the big splashy pronouncements such as announcing a wall that he would force Mexico to pay for, even as the Mexican foreign minister held talks with American officials in Washington. Not by the quiet, but no less dangerous bureaucratic orders, such as kicking the chairman of the Joint Chiefs of Staff out of meetings of the Principals’ Committee, the senior foreign-policy decision-making group below the president, while inserting his chief ideologist, Steve Bannon, into them. Many conservative foreign-policy and national-security experts saw the dangers last spring and summer, which is why we signed letters denouncing not Trump’s policies but his temperament; not his program but his character. 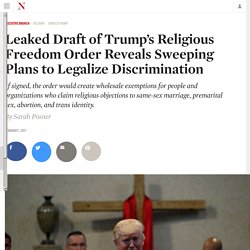 The four-page draft order, a copy of which is currently circulating among federal staff and advocacy organizations, construes religious organizations so broadly that it covers “any organization, including closely held for-profit corporations,” and protects “religious freedom” in every walk of life: “when providing social services, education, or healthcare; earning a living, seeking a job, or employing others; receiving government grants or contracts; or otherwise participating in the marketplace, the public square, or interfacing with Federal, State or local governments.” The breadth of the draft order, which legal experts described as “sweeping” and “staggering,” may exceed the authority of the executive branch if enacted. 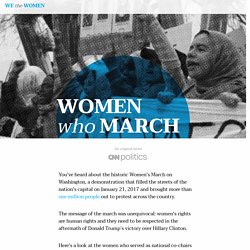 The group's website crashed earlier that morning and she entered the headquarters in a flurry, throwing off her winter coat and setting her 6-week-old baby down on the velvet couch in the middle of "the war room," as fellow march co-chair Carmen Perez called it. Bland, 34, was one of the original founders of the march that started as a Facebook event post that went viral, setting into action a domino effect of women organizing across the country. "I think one of the most transformative things about this march and the movement that is rising from it is that people who are not used to getting out of their comfort zones are now finally saying, 'Okay, enough is enough. We cannot abide by this anymore.'" Obama’s Legacy Is More Secure Than You, or the GOP, Think. Barack Obama is one of a handful of presidents with transformative domestic legacies. 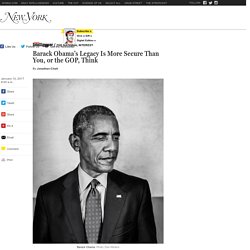 Some of those presidents, like Franklin Roosevelt and Ronald Reagan, left their office to a chosen successor who carried forward their vision. Lyndon Johnson saw his popularity dissipate in response to a failed war. Abraham Lincoln was murdered, and his successor, Andrew Johnson, was a pro-slavery southern Democrat who abhorred Lincoln’s vision. Meryl Streep called out Donald Trump at the Golden Globes. Read her speech here. While being honored with a lifetime achievement award at the 2017 Golden Globe awards, actress Meryl Streep criticized President-elect Donald Trump's performance on the campaign trail, specifically when he mocked a disabled reporter. 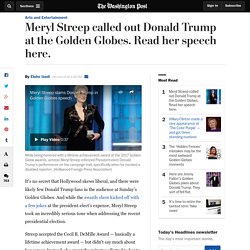 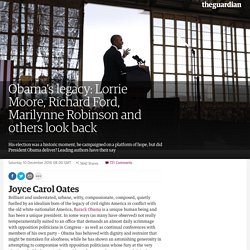 In some ways (as many have observed) not really temperamentally suited to an office that demands an almost daily scrimmage with opposition politicians in Congress – as well as continual conferences with members of his own party – Obama has behaved with dignity and restraint that might be mistaken for aloofness; while he has shown an astonishing generosity in attempting to compromise with opposition politicians whose fury at the very election of a black man to the presidency has never been tempered, it is clear that, for all his virtues, and for all his idealism, the bitterly divisive politics of our time made it impossible for him to fully realise his political mission. Siri Hustvedt. Trump Transition State Dept Gender Related. Joshua Dubois: What the President secretly did at Sandy Hook Elementary School. Below is an excerpt from The President’s Devotional by Joshua Dubois, the former head of the White House Office of Faith-Based and Neighborhood Partnerships. 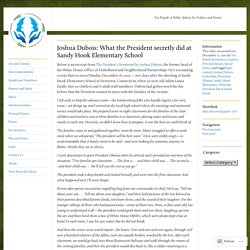 He’s recounting events that occurred Sunday, December 16, 2012 — two days after the shooting at Sandy Hook Elementary School in Newtown, Connecticut, when 20-year-old Adam Lanza fatally shot 20 children and 6 adult staff members. Dubois had gotten word the day before that the President wanted to meet with the families of the victims: Coming This Fall: The Sublime Revenge Of Barack Obama. Most presidential campaigns are freighted with drama: colliding ambitions, revelations of character, pivotal moments which arrive without warning. 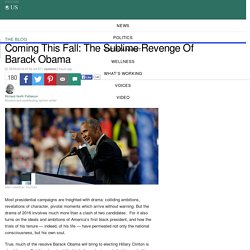 But the drama of 2016 involves much more than a clash of two candidates. For it also turns on the ideals and ambitions of America’s first black president, and how the trials of his tenure — indeed, of his life — have permeated not only the national consciousness, but his own soul. Barack Obama: Now Is the Greatest Time to Be Alive. When WIRED asked me to guest-edit the November issue, I didn’t hesitate. 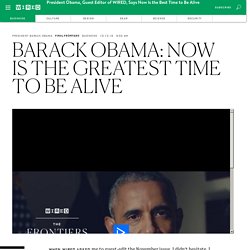 I know it’s the height of election season, and I happen to have a day job that keeps me pretty busy. But given the chance to immerse myself in the possibility of interplanetary travel or join a deep-dive conversation on artificial intelligence, I’m going to say yes. I love this stuff. Always have. Trans people are terrified of what lies ahead. We must look out for one another.

Barack Obama on 5 Days That Shaped His Presidency. On August 25, after a short trip to Baton Rouge to assess flooding in Louisiana and before what will likely be his last visit to China on Air Force One, Barack Obama sat down at the White House to reflect on the past eight years. 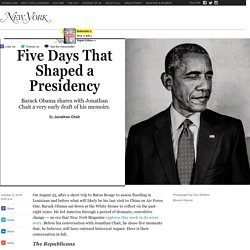 He led America through a period of dramatic, convulsive change — an era that New York Magazine explores this week in its cover story. Before his conversation with Jonathan Chait, he chose five moments that, he believes, will have outsized historical impact. Obama Reckons with a Trump Presidency. The morning after Donald Trump was elected President of the United States, Barack Obama summoned staff members to the Oval Office. Some were fairly junior and had never been in the room before.

They were sombre, hollowed out, some fighting tears, humiliated by the defeat, fearful of autocracy’s moving vans pulling up to the door. Although Obama and his people admit that the election results caught them completely by surprise—“We had no plan for this,” one told me—the President sought to be reassuring. “This is not the apocalypse,” Obama said.