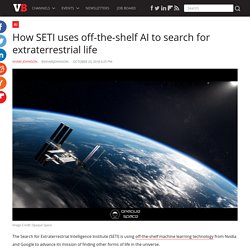 Using these tools, a newly hired graduate student last fall discovered the richest signal dataset found to date. “I didn’t believe him, actually, but eventually that was borne out to be true. And in fact the thing that took the longest was actually writing the paper and getting it through peer review,” Berkeley SETI Research Center director Andrew Siemion said. This AI system can generate images of artificial galaxies. Picture this: star clusters, nebulas, and other interstellar phenomena created out of whole cloth unsupervised, by a computer. 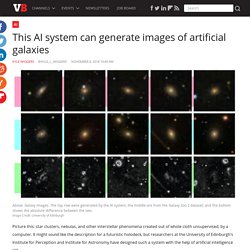 It might sound like the description for a futuristic holodeck, but researchers at the University of Edinburgh’s Institute for Perception and Institute for Astronomy have designed such a system with the help of artificial intelligence (AI). In a paper published on the preprint server Arxiv.org (“Forging new worlds: high-resolution synthetic galaxies with chained generative adversarial networks“), they describe an AI model capable of generating high-resolution images of synthetic galaxies that closely follow the distributions of real galaxies.

“Astronomy of the 21st century finds itself with extreme quantities of data, with most of it filtered out during capture to save on memory storage,” they wrote. Google and university researchers are using deep learning to discover exoplanets. A robot has figured out how to use tools. Learning to use tools played a crucial role in the evolution of human intelligence. 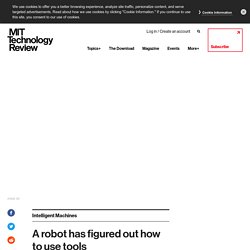 It may yet prove vital to the emergence of smarter, more capable robots, too. New research shows that robots can figure out at least the rudiments of tool use, through a combination of experimenting and observing people. Chelsea Finn, a researcher at Google Brain, and Sergey Levine, an assistant professor at UC Berkeley, developed the robotic system together with several of Levine’s students. Boston Dynamics buys a better brain for its robots. It is famous for making acrobatic, eerily lifelike, and somewhat accident-prone robots. 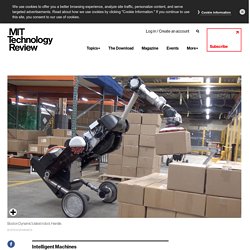 Now Boston Dynamics is buying technology that could give its creations the brains they need to navigate the real world. Watch 10 Boston Dynamics Robo-Dogs Pull a Truck in a Parking Lot. Robot ATLAS from Boston Dynamics can backflip and do parkour. Are we one step closer to the robo apocalypse? 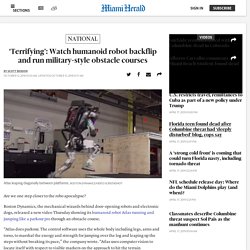 Boston Dynamics, the mechanical wizards behind door-opening robots and electronic dogs, released a new video Thursday showing its humanoid robot Atlas running and jumping like a parkour pro through an obstacle course. “Atlas does parkour. The control software uses the whole body including legs, arms and torso, to marshal the energy and strength for jumping over the log and leaping up the steps without breaking its pace,” the company wrote. “Atlas uses computer vision to locate itself with respect to visible markers on the approach to hit the terrain accurately.”

The video shows the robot jogging and jumping over a large log without breaking pace, then hopping diagonally up three large steps and running forward. DeepMind wants to teach AI to play a card game that’s harder than Go. If you’ve ever played the card game Hanabi, you’ll understand when I say it’s unlike any other. 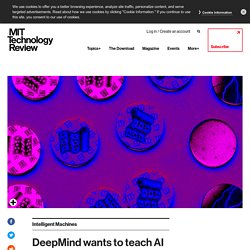 It’s a collaborative game in which you have full view of everyone else’s hands but not your own. To win the game, each player must give the others hints about their hands over a limited number of rounds to arrange all the cards in a specific order. It’s an intense exercise in strategy, inference, and cooperation. An AI is playing Pictionary to figure out how the world works. It might be a frivolous after-dinner game to you, but Pictionary could perhaps give AI programs a deeper understanding of the world. 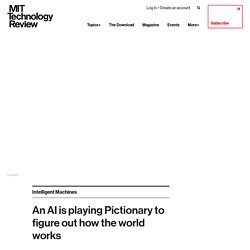 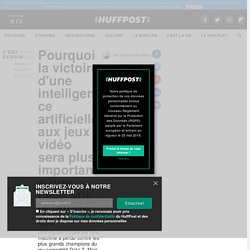 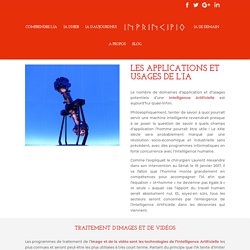 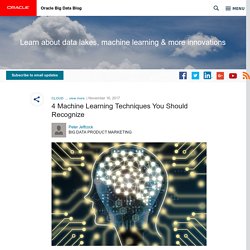 But within machine learning, there are several techniques you can use to analyze your data. Today I’m going to walk you through some common ones so you have a good foundation for understanding what’s going on in that much-hyped machine learning world. If you are a data scientist, remember that this series is for the non-expert. But first, let’s talk about terminology. A Google Brain Program Is Learning How to Program. The idea of using machine learning to teach programs how to automatically write or modify code has always been tempting for computer scientists. The feat would not only greatly reduce engineering time and effort, but could also lead to the creation of novel and advanced intelligent agents.

In a new paper, Google Brain researchers propose using neural networks to model human source code editing. China's Google Equivalent Can Clone Voices After Seconds of Listening. The Google of China, Baidu, has just released a white paper showing its latest development in artificial intelligence (AI): a program that can clone voices after analyzing even a seconds-long clip, using a neural network. Not only can the software mimic an input voice, but it can also change it to reflect another gender or even a different accent. You can listen to some of the generated examples here, hosted on GitHub. Previous iterations of this technology have allowed voice cloning after systems analyzed longer voice samples. In 2017, the Baidu Deep Voice research team introduced technology that could clone voices with 30 minutes of training material. Adobe has a program called VoCo which could mimic a voice with only 20 minutes of audio.

While at first this may seem like an upgrade to tech that became popular in the 90s, with the help of “Home Alone 2” and the “Scream” franchise, there are actually some noble applications for this technology. This AI Can Clone Any Voice, Including Yours. Des chercheurs du CNRS/Thales créent le premier nano-neurone artificiel capable de reconnaissance vocale. Récemment, les algorithmes d’intelligence artificielle sont devenus performants pour la reconnaissance visuelle ou vocale.

Une expérience de traduction poétique : IA vs humain. La-start-up-francaise-deepomatic-specialiste-de-la-reconnaissance-d-images-leve-6-2-millions-de-dollars. AI-produced artwork is moving from the fringes into the high art world. In a month, prestigious auction house Christie’s will invite the upper crust of the art collector world to their Manhattan showroom to bid on a gold-framed impressionistic portrait of a European gentleman.

It would be an ordinary affair in the world of high art, except for one detail: The portrait for sale was generated by AI, not a famous painter. It will be the first AI-produced artwork to be sold at a major auction house — and is estimated to sell for $7,000 to $10,000. Google creates neuroaesthetic experience for Salone del Mobile. Should a self-driving car kill the baby or the grandma? Depends on where you’re from. In 2014 researchers at the MIT Media Lab designed an experiment called Moral Machine. The idea was to create a game-like platform that would crowdsource people’s decisions on how self-driving cars should prioritize lives in different variations of the “trolley problem.” In the process, the data generated would provide insight into the collective ethical priorities of different cultures.

It works by modelling his previous word usage to predict what words he will use next, similar to predictive texting available on many smart phone devices. But Professor Hawking also mentioned his concern over the development of machines that might surpass us. “Once humans develop artificial intelligence, it would take off on its own and re-design itself at an ever increasing rate,” he reportedly told the BBC.