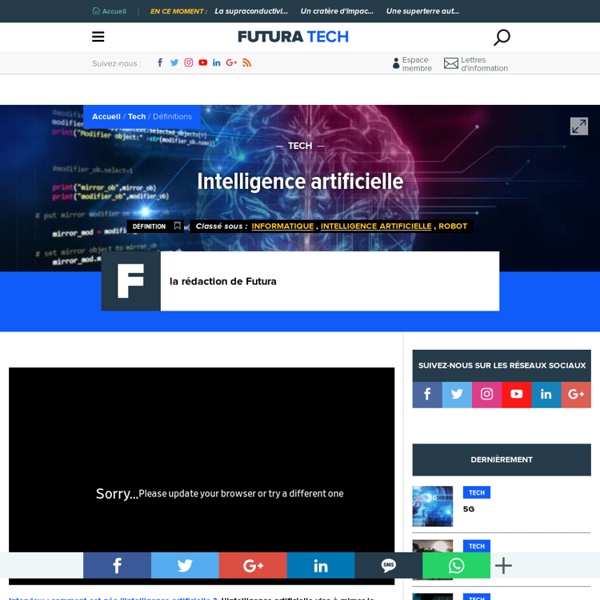 AI researchers want to study AI the same way social scientists study humans Much ink has been spilled on the black-box nature of AI systems—and how it makes us uncomfortable that we often can’t understand why they reach the decisions they do. As algorithms have come to mediate everything from our social and cultural to economic and political interactions, computer scientists have attempted to respond to rising demands for their explainability by developing technical methods to understand their behaviors. But a group of researchers from academia and industry are now arguing that we don’t need to penetrate these black boxes in order to understand, and thus control, their effect on our lives. After all, these are not the first inscrutable black boxes we’ve come across. “We've developed scientific methods to study black boxes for hundreds of years now, but these methods have primarily been applied to [living beings] up to this point,” says Nick Obradovich, an MIT Media Lab researcher and co-author of a new paper published last week in Nature.

The Moral Machine experiment 1.Greene, J. Moral Tribes: Emotion, Reason and the Gap Between Us and Them (Atlantic Books, London, 2013).2.Tomasello, M. A Natural History of Human Thinking (Harvard Univ. Should a self-driving car kill the baby or the grandma? Depends on where you’re from. In 2014 researchers at the MIT Media Lab designed an experiment called Moral Machine. The idea was to create a game-like platform that would crowdsource people’s decisions on how self-driving cars should prioritize lives in different variations of the “trolley problem.” In the process, the data generated would provide insight into the collective ethical priorities of different cultures. The researchers never predicted the experiment’s viral reception.

The Guardian view on artificial intelligence: human learning In a modern company like Amazon, almost all human activity is directed by computer programs. They not only monitor workers’ actions but are used to choose who should be employed. Yet it emerged last week that the company had scrapped an attempt to use artificial intelligence to select workers on the basis of their CVs, since the results consistently discriminated against women.

Three things you need to know about machine learning Machine learning is all the rage, and major improvements in infrastructure, data storage, and cloud adoption have led to growing interest in the space. Many consumer-facing advancements reside within Google and Facebook, but other companies are investing in the field as well. However, given all the excitement around machine learning, it’s important to understand some of the nuances and mechanics of what machine learning is and how it works. As an investor at Redpoint Ventures, I have the privilege of learning from people and companies on the cutting edge of this technology.

China's Google Equivalent Can Clone Voices After Seconds of Listening The Google of China, Baidu, has just released a white paper showing its latest development in artificial intelligence (AI): a program that can clone voices after analyzing even a seconds-long clip, using a neural network. Not only can the software mimic an input voice, but it can also change it to reflect another gender or even a different accent. You can listen to some of the generated examples here, hosted on GitHub. Previous iterations of this technology have allowed voice cloning after systems analyzed longer voice samples. In 2017, the Baidu Deep Voice research team introduced technology that could clone voices with 30 minutes of training material.

What is Digital Journalism - and Why Does it Matter? DIGITAL journalism is very different to the traditional journalism that was around as little as a decade ago. From the way news is captured to its reception by readers, students wishing to become journalists need to be familiar with many digital skills in order to compete with the competition. Below is our guide to the main developments and how these may influence media and journalism students. In simple words. With real-world examples. Yes, again This is Billy. Billy wants to buy a car. He tries to calculate how much he needs to save monthly for that. He went over dozens of ads on the internet and learned that new cars are around $20,000, used year-old ones are $19,000, 2-year old are $18,000 and so on. Billy, our brilliant analytic, starts seeing a pattern: so, the car price depends on its age and drops $1,000 every year, but won't get lower than $10,000.

10 Craziest AI Experiments to Try Online Today Artificial intelligence is a topic of mystery, wonder, and endless possibilities for many. Despite all the recent hype, AI remains elusive to the general public and is often shrouded in misconceptions. In an attempt to make AI technology more accessible to the average person, developers worldwide are creating more and more online AI experiments and opening them to the public. AI-produced artwork is moving from the fringes into the high art world In a month, prestigious auction house Christie’s will invite the upper crust of the art collector world to their Manhattan showroom to bid on a gold-framed impressionistic portrait of a European gentleman. It would be an ordinary affair in the world of high art, except for one detail: The portrait for sale was generated by AI, not a famous painter. It will be the first AI-produced artwork to be sold at a major auction house — and is estimated to sell for $7,000 to $10,000. AI-generated art has existed for years — remember those weird, trippy Google projects? — but in its nascent form has mostly been relegated to niche audiences and experiments.

"Journalism in the digital age: trends, tools and technologies" It used to be incredibly expensive to publish a story and make it available to a mass audience. In the centre of Rome, for example, is the Colonna Traiana. Built by the Roman Senate to celebrate the achievements of Emperor Trajan, it can be argued that it was the equivalent of the council newspaper today - an expensive propaganda tool, telling the story of events in the way that the state ordered them to be portrayed. Several hundred years later, the time consuming and costly business of transcribing documents by hand was how news was reported and preserved.

New Website Generates Fake Photos of People Using AI Technology The above photos may look like your average portraits or photo ID pictures, but there’s much more than meets the eye. Using new advances in AI developed by researchers at NVIDIA, software engineer Phillip Wang created the website This Person Does Not Exist. That’s correct—none of the “people” pictured are real. Wang, who posted his work in the Artificial Intelligence & Deep Learning Facebook group, created the website to raise awareness about the technology. “Faces are most salient to our cognition, so I’ve decided to put that specific pre-trained model up,” Wang wrote. “Each time you refresh the site, the network will generate a new facial image from scratch from a 512-dimensional vector.”