The Art of Complex Problem Solving. Metaphysics. Metaphysics is a traditional branch of philosophy concerned with explaining the fundamental nature of being and the world that encompasses it,[1] although the term is not easily defined.[2] Traditionally, metaphysics attempts to answer two basic questions in the broadest possible terms:[3] Ultimately, what is there? 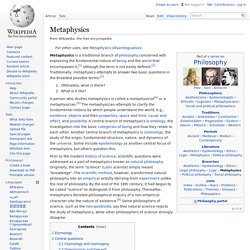 What is it like? Prior to the modern history of science, scientific questions were addressed as a part of metaphysics known as natural philosophy. Originally, the term "science" (Latin scientia) simply meant "knowledge". The scientific method, however, transformed natural philosophy into an empirical activity deriving from experiment unlike the rest of philosophy. Etymology[edit] However, once the name was given, the commentators sought to find intrinsic reasons for its appropriateness. Central questions[edit] Cosmology and cosmogony[edit] Design of experiments. Deductive reasoning. Deductive reasoning links premises with conclusions. 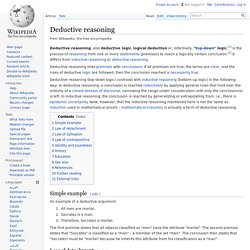 Reason. Psychologists and cognitive scientists have attempted to study and explain how people reason, e.g. which cognitive and neural processes are engaged, and how cultural factors affect the inferences that people draw. 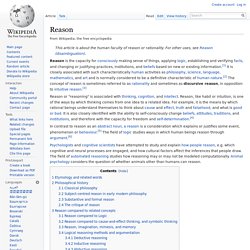 The field of automated reasoning studies how reasoning may or may not be modeled computationally. Animal psychology considers the question of whether animals other than humans can reason. Etymology and related words[edit] In the English language and other modern European languages, "reason", and related words, represent words which have always been used to translate Latin and classical Greek terms in the sense of their philosophical usage.

The original Greek term was "λόγος" logos, the root of the modern English word "logic" but also a word which could mean for example "speech" or "explanation" or an "account" (of money handled).[7]As a philosophical term logos was translated in its non-linguistic senses in Latin as ratio. Philosophical history[edit] Inductive reasoning. Scientific method. Diagram illustrating steps in the scientific method. 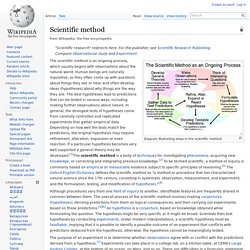 The scientific method is an ongoing process, which usually begins with observations about the natural world. Human beings are naturally inquisitive, so they often come up with questions about things they see or hear and often develop ideas (hypotheses) about why things are the way they are. The best hypotheses lead to predictions that can be tested in various ways, including making further observations about nature. In general, the strongest tests of hypotheses come from carefully controlled and replicated experiments that gather empirical data. Thought experiment. A thought experiment or Gedankenexperiment (from German) considers some hypothesis, theory,[1] or principle for the purpose of thinking through its consequences. 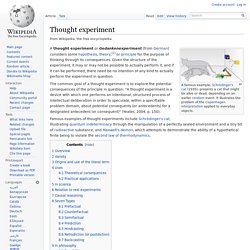 Given the structure of the experiment, it may or may not be possible to actually perform it, and if it can be performed, there need be no intention of any kind to actually perform the experiment in question. The common goal of a thought experiment is to explore the potential consequences of the principle in question: "A thought experiment is a device with which one performs an intentional, structured process of intellectual deliberation in order to speculate, within a specifiable problem domain, about potential consequents (or antecedents) for a designated antecedent (or consequent)" (Yeates, 2004, p. 150). Overview[edit] Salviati. Although the extract does not convey the elegance and power of the 'demonstration' terribly well, it is clear that it is a 'thought' experiment, rather than a practical one. Variety[edit] Occam's razor.

The sun, moon and other solar system planets can be described as revolving around the Earth. 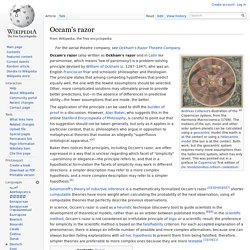 However that explanation's ideological and complex assumptions are completely unfounded compared to the modern consensus that all solar system planets revolve around the Sun. Ockham's razor (also written as Occam's razor and in Latin lex parsimoniae) is a principle of parsimony, economy, or succinctness used in problem-solving devised by William of Ockham (c. 1287 - 1347). It states that among competing hypotheses, the one with the fewest assumptions should be selected. Other, more complicated solutions may ultimately prove correct, but—in the absence of certainty—the fewer assumptions that are made, the better.

Solomonoff's theory of inductive inference is a mathematically formalized Occam's Razor:[2][3][4][5][6][7] shorter computable theories have more weight when calculating the probability of the next observation, using all computable theories which perfectly describe previous observations. Blind experiment. Meta-analysis. In statistics, meta-analysis comprises statistical methods for contrasting and combining results from different studies, in the hope of identifying patterns among study results, sources of disagreement among those results, or other interesting relationships that may come to light in the context of multiple studies.[1] Meta-analysis can be thought of as "conducting research about previous research. 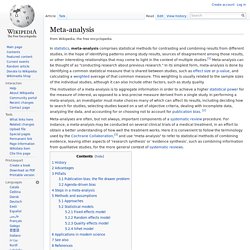 " In its simplest form, meta-analysis is done by identifying a common statistical measure that is shared between studies, such as effect size or p-value, and calculating a weighted average of that common measure. This weighting is usually related to the sample sizes of the individual studies, although it can also include other factors, such as study quality. The motivation of a meta-analysis is to aggregate information in order to achieve a higher statistical power for the measure of interest, as opposed to a less precise measure derived from a single study. 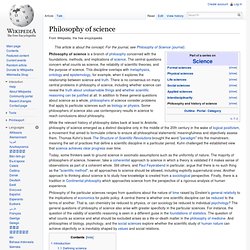 The central questions concern what counts as science, the reliability of scientific theories, and the purpose of science. This discipline overlaps with metaphysics, ontology and epistemology, for example, when it explores the relationship between science and truth. There is no consensus on many central problems in philosophy of science, including whether science can reveal the truth about unobservable things and whether scientific reasoning can be justified at all. In addition to these general questions about science as a whole, philosophers of science consider problems that apply to particular sciences such as biology or physics. Some philosophers of science also use contemporary results in science to reach conclusions about philosophy. Strong inference.

In philosophy of science, strong inference is a model of scientific inquiry that emphasizes the need for alternative hypotheses, rather than a single hypothesis in order to avoid confirmation bias. 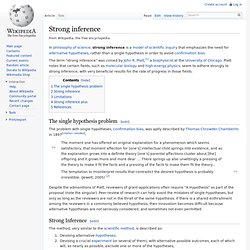 The term "strong inference" was coined by John R. Platt,[1] a biophysicist at the University of Chicago. Platt notes that certain fields, such as molecular biology and high-energy physics, seem to adhere strongly to strong inference, with very beneficial results for the rate of progress in those fields.