www.travel-peopleandplaces.co.uk responsible volunteering we are an award winning volunteer recruitment organisation - we recruit skilled volunteers to work with local people not instead of them follow people and places om twittwr @pandpvolunteer for news from volunteers and projects and more follow our blog

Facebook - Log In or Sign Up. Lumos sur Twitter : "Where have all the children gone? The @TheSTMagazine @niccijsmith reports on harm of #orphanage care #Nepal (paywall) Madonna's Orphanage: Madonna shares her heart for Malawi and plan to build an orphanage! Madonna has announced plans to open up an orphanage in Malawi. 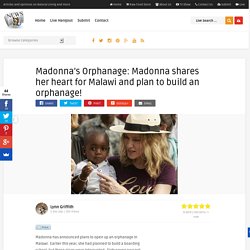 Earlier this year, she had planned to build a boarding school, but these plans were interrupted. Sixty-seven percent of girls in Malawi do not go to secondary school. Malawi also has an adult HIV prevalence rate of 11 percent, in addition to 120,000 children under the age of 15 living with HIV. (1) The pandemic has left families affected by the breakdown of the family infrastructure. In 2009, it was reported that 650,000 of the country’s 1 million orphans lost one or both parents to AIDS. (1) Madonna shares plan to open an orphanage to help house and care for some of the country’s 1 million orphans! Malawi is one of the poorest countries in Africa, with the annual income per capita being $800.

Volunteer projects abroad news. The Gambia This from Adama, our local partner in The Gambia and the driving force behind ASSET: 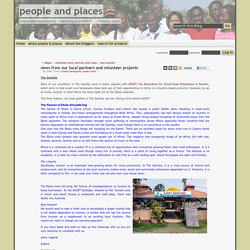 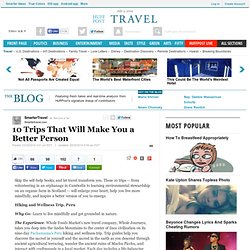 Child protection groups appalled by orphanage safari - News - The Copenhagen Post. A visit to a local children’s home where you can pat cute kids on the head is a popular way for tourists to experience the poorer side of life in countries like India, Myanmar, Thailand and Cambodia. 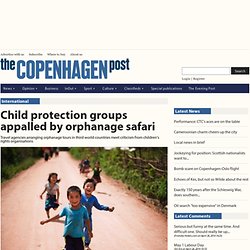 The tourists may mean well, but orphanage tourism damages and exploits parentless children according to children's rights organisations Børns Vilkår and Red Barnet, who want the travel agencies to stop arranging the tours immediately. "To see the absurdity, you just have to imagine a reversed situation in which foreign tourists go on guided tours through Jutland and visit child institutions," Peter Albæk, the head of Børns Vilkår, told Kristeligt Dagblad.

"There is no difference between a trip to an orphanage and a zoo. It's deeply tasteless and unethical. " Volunteer Ausland, Freiwilligenarbeit, Entwicklungshilfe leisten. Orphanage volunteering campaign by responsibletravel.com. US church working to regain Haiti orphanage permit. PORT-AU-PRINCE, Haiti (AP) — A troubled Haitian orphanage run by a small and apparently well-funded U.S. church has made cosmetic changes in the two months since an Associated Press report exposed squalor and neglect, but has not done enough to address staffing problems and other issues that could put children at risk, according to two people helping the organization improve. 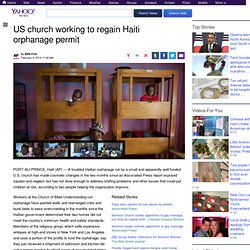 Learning Service Video Contest. The Pity Industry. (The following is a C&P compilation of some of the main points I have made in debating the orphanage tourism/voluntourism issue on various travel forums between 2005-2008, primarily on Lonely Planet's Thorn Tree forum.) 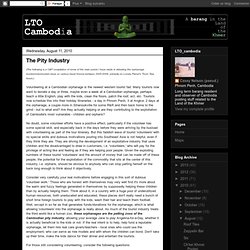 Volunteering at a Cambodian orphanage is the newest western tourist fad. Many tourists now want to donate a day or three, maybe even a week at a Cambodian orphanage, perhaps teach a little English, play with the kids, clean the floors, patch the roof, ect, etc. Tourists now schedule this into their holiday itineraries - a day in Phnom Penh, 3 at Angkor, 2 days at the orphanage, a couple more in Sihanoukville for some R&R and then back home to the grind - but to what end?

Are they actually helping or are they contributing to the exploitation of Cambodia's most vulnerable - children and orphans? Tourism Concern - News from Tourism Concern. This years World Responsible Tourism Day underlined the responsibility we as travellers and travel providers have for child protection. 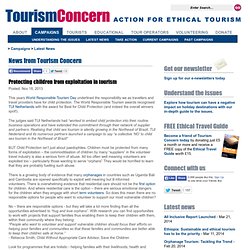 The World Responsible Tourism awards recognised TUI Netherlands with the award for Best for Child Protection (and indeed the overall winners spot!). The judges said TUI Netherlands had “worked to embed child protection into their routine business operations and have extended this commitment through their network of supplier and partners. Realising that child sex tourism is silently growing in the Northeast of Brazil, TUI Nederland and its numerous partners launched a campaign to say “a collective ‘NO’ to child sex tourism in the Northeast of Brazil” BUT Child Protection isn’t just about paedophiles. India: the orphanage giving girls a future. Girls are particularly vulnerable to abandonment. 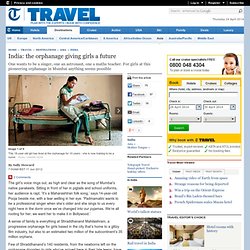 In addition to financially supporting their parents in old age, sons hold the promise of recruiting a wife into the family home to help with domestic labour. Girls, meanwhile, require their parents to save for an often exorbitant dowry and wedding, before relinquishing them, and their labour, to another family home. It’s an unsavoury reality that plays out in Indian labour wards, where, according to The Times of India, nurses have been known to accept bribes to exchange baby girls for baby boys.

Activists talk of eight million 'missing girls’, the number of female foetuses estimated to have been aborted over the past decade due to their sex. Pity Charity: When “Storytelling” is Abuse. November 21, 2013; Trust.org Writing in a blog on the Skoll World Forum for Social Entrepreneurship, Sebastien Marot discusses the practice by charities of featuring poor or abused children in videos meant to raise funds. 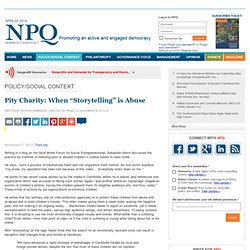 He says, “such a process re-traumatizes them and can stigmatize them forever. As one victim explains, ‘You know, my reputation has been lost because of this video…. Everybody looks down on me.’” He points to two recent cases picked up by the media in Cambodia, where he is based, and references one organization which was accused of faking such stories “again,” and another where an “orphanage” staged an auction of children’s photos, having the children present them “to heighten audience pity, and thus, sales.” Tourism Concern - News from Tourism Concern. Unreported World - Videos - Unreported World Short: Voluntourism in Nepal. A unique insight on the big stories of the day, Snowmail is your direct line to the Channel 4 newsroom. 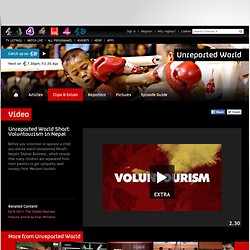 Written by the team you know and trust, it's delivered straight to your inbox daily. Making money from babies Why orphanage ‘business’ thrives in South-East. The arrests of owners of illegal foster homes who engage in sale of babies to those who need them for one reason or the other has brought to the fore the continuous trend of the criminal act. JUDE OSSAI reports on why selling of babies has continued to flourish in the South-East. UNTIL recently, it was a sacrilege in Igboland for someone to be involved in baby sale, especially after the abolition of slave trade. Babies are regarded as free gifts from God. This is expressed in an Igbo saying ‘anaghi ere nwa na ahia, nwa bu Onyinyechukwu’. Thus, they are not expected to be put on sale. However, the tradition of the past seems to have been jettisoned for the new trend which has pervaded many states in Nigeria, especially the South-Eastern part.

Support Families, Not Orphanages, For Vulnerable Children. My grandma Sadie lived in the town of Droghobych in Ukraine until she was 13. Nearby, there is a dirt road through a forest leading to the mass graves where the town’s last Jewish population lies buried. It is barely marked — if you did not know to look for the large slabs of concrete between the trees, you would have a hard time finding it. As a human rights lawyer who has spent a lifetime documenting atrocities, I was not prepared for the effect of this visit a few months ago. Helping Haitians help themselves. PORT-AU-PRINCE, Haiti—Five years ago, Americans Corrigan and Shelly Clay wanted to adopt a Haitian child. While visiting a few of the country’s many orphanages, they learned some orphaned children actually aren’t orphans: They have parents who cannot afford to keep them. Instead of using their money to adopt, the Clays moved to Haiti with their four children in 2008 with a different plan—put impoverished people to work so families can stay intact.

Umbrella helps to close home and reintegrate 13 children - The Umbrella Foundation. In March 2013, Umbrella worked with Stichting Veldwerk (SV), a Dutch INGO, to close their children’s homes in the Sindhupalchok district of Nepal (5 hours from Kathmandu) and reintegrate the 13 children living there with their relatives in the surrounding villages. When the children were originally taken in around 2006, Nepal’s internal conflict had just come to an end and many of them had lost their parent(s). Their turbulent home situations did not allow them to grow up in a safe environment.

However, over 6 years later most of their family situations have improved, partly due to their mothers (often widows) having taken part in income generation activities, run by SV in the area. The trafficked, abandoned and displaced children of Nepal. Developing countries have been hit hard by the financial crisis in the West, as funding rapidly dwindles for organizations such as The Umbrella Foundation, one of the most established sources of support for the lost children of Nepal.

Child trafficking, street children and corrupt orphanage owners are just some of the issues dealt with by the organization, whose primary mission, in accordance with research by United Nations Children’s Fund (UNICEF), is to reunify children with their families. The founding of The Umbrella Foundation It took great sympathy and little observation for Irish born Viva Bell, Dave Cutler and Harry Coogan to perceive that somebody needed to take action against corrupt orphanage owners in Nepal’s capital of Kathmandu.

Upon meeting a street child suffering from a throat infection, Bell took the child to the hospital, waiting as they nursed him back to health, and then to an orphanage where she visited him a few times. Fake orphanages. Bogus animal sanctuaries. And crooks growing rich on Western gullibility... why do-gooding gap year holidays may be a horrifyingly callous con. Me13-0002. Chilling experiment shows how children were happy to walk off with a stranger in the park... and it took just 90 seconds to persuade them. Delhi Classifieds Mobile. The boom of Cambodia's orphanage tourism. During the daytime, tourists flock to the temples of Angkor Wat in Cambodia.

Orphanages are no place for children. Orphans in Congo. Can we talk about orphans without talking about international adoption? Taking responsibility for orphanage tourism - WTM Responsible Tourism Blog. WTM, orphanages and taking responsibility - Harold Goodwin's Blog. R_travel. Orphanage volunteering 'part of the problem' "Instead of family-based support, orphanage care too often becomes the first solution for volunteers and NGOs unaware of other alternatives. There is overwhelming evidence from UNICEF documenting the detrimental effect orphanages have on children’s physical and emotional wellbeing. Alongside a boom in tourism, the number of orphanages in Bali has doubled in the last 20 years, suggesting well-meaning volunteers are actually fuelling the demand.

Your multinational company has nothing... - Projects Abroad UK.

People and places you tube