Volvo’s Fully Driverless Vera Truck is Put to Work in Sweden. Volvo has been investing heavily in the development of self-driving trucks in recent years and has even put some of its creations to work, including a vehicle for trash collection in Sweden and another for carrying heavy loads at a mine in Norway. 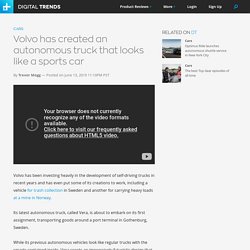 Its latest autonomous truck, called Vera, is about to embark on its first assignment, transporting goods around a port terminal in Gothenburg, Sweden. While its previous autonomous vehicles look like regular trucks with the smarts contained inside, Vera sports an impressively futuristic design that takes Volvo’s self-driving efforts to a whole new level. As you can see in the video above, the creators of the electric vehicle have done away with the driver’s cab, giving the front the look of a low-slung sports car from some angles.

Volvo plans to deploy Vera with ferry and logistics firm DFDS. Other companies developing large self-driving trucks include TuSimple, which recently partnered for a trial with the U.S. We should be worried about job atomization, not job automation. Jon Evans is the CTO of the engineering consultancy HappyFunCorp; the award-winning author of six novels, one graphic novel, and a book of travel writing; and TechCrunch's weekend columnist since 2010. 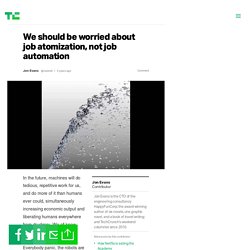 In the future, machines will do tedious, repetitive work for us, and do more of it than humans ever could, simultaneously increasing economic output and liberating humans everywhere from drudgery. We all know what that means: Disaster! Dystopia! Catastrophe! Everybody panic, the robots are stealing our jobs! Does it not seem completely insane, when you take a step back, that we’re actually collectively upset about this prospect? Dwight Eisenhower once said: “If you can’t solve a problem, enlarge it.” Don’t blame the robots. But the original study notes that the ‘“Online Gig Economy” has been growing very rapidly.’ How automation is changing work. If you were beginning a career in computer programming in 2007, there were good times ahead: robust salary growth, the construction of the app ecosystem and economy, and the meteoric rise of social media. 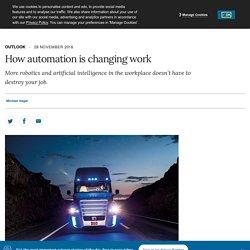 But if you happened across that August’s issue of Business Week magazine, you might have been discouraged. It predicted that the career most likely to suffer from job losses in the United States was … computer programmer. “They didn’t get it slightly wrong,” explains Roy Bahat, the head of venture-capital firm Bloomberg Beta in San Francisco, California. “They got it 180 degrees wrong.” Bahat might have had that misstep in mind when he co-authored a 2017 report1 into how work might change over the next 10–20 years. 5 million jobs to be lost by 2020. We are seeing an era of unprecedented change in the way we work. 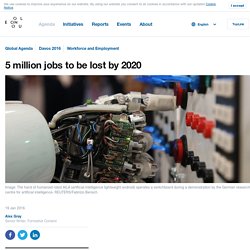 Rapid advancements in the fields of technology, such as artificial intelligence and machine learning, and in how we create things, such as robotics, nanotechnology, 3D printing and biotechnology, will dramatically change the characteristics of the global workforce. The Fourth Industrial Revolution is changing the workplace fast, and we will need to adapt our skills to be ready for it. What will happen to jobs? According to the Forum’s Future of Jobs report, some jobs will be wiped out, others will be in high demand, but all in all, around 5 million jobs will be lost.

Already jobs exist now that had never been heard of five years ago: the role of data scientist, which is in huge demand, is one example. Other jobs will start to require skills not previously associated with them. Everywhere we look, skillsets will need to be radically altered to keep pace with the changes taking place in the world of work. Share Written by. Infrastructure development in a connected world. Automation.

Hyper-real virtual living. Alexa, I love you. What is 5G? All you need to know about the next generation of wireless technology. UPDATED: January 2019 Last September, consumers began to see the first service bundles offered by telecommunications companies in their area, marketed with some form of the term "5G. 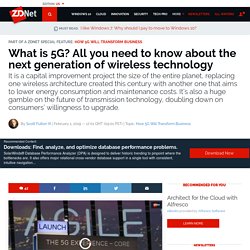 " "5G is here," declared Verizon CEO Hans Vestberg, specifically for cities such as Sacramento, Los Angeles, and Indianapolis where rival AT&T had already been drumming up excitement around its 5G trials. It was a bit like SpaceX's 2016 announcement, its 2017 announcement, and its 2018 announcement that the race to Mars had begun. Read also: T-Mobile and Sprint merger: The numbers and assumptions you need to know 5G Wireless is an explicit set of technologies specified by the 3rd Generation Partnership Project (3GPP) as "Release 15" and "Release 16. " 3GPP is an organization consisting of essentially all the world's telecommunications standards bodies who agreed to share the definition of 3G Wireless, and to move on from there to successive generations.

Who gets to say what 5G really is and isn't Service tiers. The road to 5G: The inevitable growth of infrastructure cost. Network cost could double as operators strive to meet demand for increased capacity and deploy 5G. 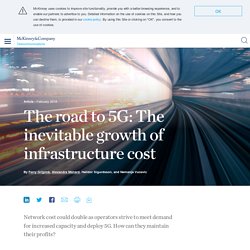 How can they maintain their profits? Each generation of technology opens new opportunities for telecommunications players. There’s Worrying New Research About Kids’ Screen Time and Their Mental Health.