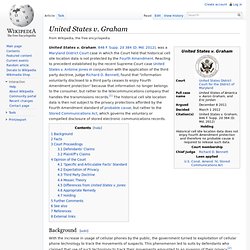 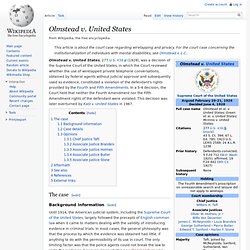 United States, 277 U.S. 438 (1928), was a decision of the Supreme Court of the United States, in which the Court reviewed whether the use of wiretapped private telephone conversations, obtained by federal agents without judicial approval and subsequently used as evidence, constituted a violation of the defendant’s rights provided by the Fourth and Fifth Amendments. Katz v. United States. Katz v. 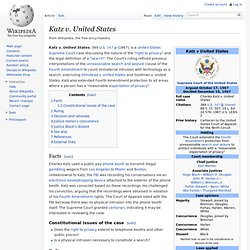 United States, 389 U.S. 347 (1967), is a United States Supreme Court case discussing the nature of the "right to privacy" and the legal definition of a "search". The Court’s ruling refined previous interpretations of the unreasonable search and seizure clause of the Fourth Amendment to count immaterial intrusion with technology as a search, overruling Olmstead v. United States and Goldman v. United States. Katz also extended Fourth Amendment protection to all areas where a person has a "reasonable expectation of privacy". Facts[edit] Charles Katz used a public pay phone booth to transmit illegal gambling wagers from Los Angeles to Miami and Boston.

Constitutional issues of the case[edit] Does the right to privacy extend to telephone booths and other public places? Ruling[edit] Decision and rationale[edit] Smith v. Maryland. Background[edit] 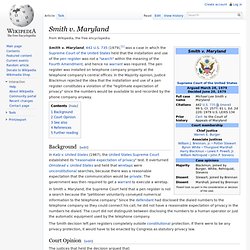 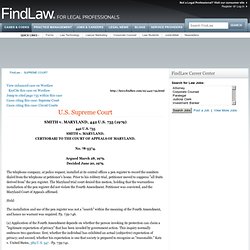 Stored Communications Act. The Fourth Amendment to the U.S. 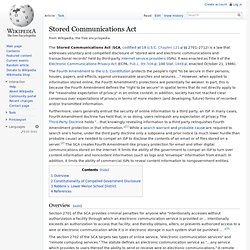 Constitution protects the people's right "to be secure in their persons, houses, papers, and effects, against unreasonable searches and seizures…. " However, when applied to information stored online, the Fourth Amendment's protections are potentially far weaker. In part, this is because the Fourth Amendment defines the "right to be secure" in spatial terms that do not directly apply to the "reasonable expectation of privacy" in an online context. In addition, society has not reached clear consensus over expectations of privacy in terms of more modern (and developing, future) forms of recorded and/or transmitted information. Furthermore, users generally entrust the security of online information to a third party, an ISP. Overview[edit] The section 2702 of the SCA targets two types of online service, "electronic communication services" and "remote computing services.

" Straight From the NSA's Mouth: We Searched You Without a Warrant. Photo Credit: Shutterstock/Andrey_Popov April 2, 2014 | Like this article? 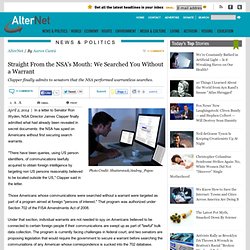 Join our email list: Stay up to date with the latest headlines via email. In a letter to Senator Ron Wyden, NSA Director James Clapper finally admitted what had already been revealed in secret documents: the NSA has spied on Americans without first securing search warrants. "There have been queries, using US person identifiers, of communications lawfully acquired to obtain foreign intelligence by targeting non US persons reasonably believed to be located outside the US," Clapper said in the letter. Those Americans whose communications were searched without a warrant were targeted as part of a program aimed at foreign "persons of interest.

" Under that section, individual warrants are not needed to spy on Americans believed to be connected to certain foreign people if their communications are swept up as part of "lawful" bulk data collection. The DEA Thinks You Have “No Constitutionally Protected Privacy Interest” in Your Confidential Prescription Records.

The Drug Enforcement Administration thinks people have “no constitutionally protected privacy interest” in their confidential prescription records, according to a brief filed last month in federal court. 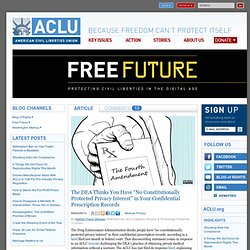 That disconcerting statement comes in response to an ACLU lawsuit challenging the DEA’s practice of obtaining private medical information without a warrant. The ACLU has just filed its response brief, explaining to the court why the DEA’s position is both startling and wrong. We represent four patients and a physician in Oregon whose confidential prescription records are contained in a state database that tracks prescriptions for certain drugs. The database, called the Oregon Prescription Drug Monitoring Program (PDMP), was intended to be a public health tool to help physicians avoid drug overdoses and abuse in their patients. Supreme Court Makes Big Decision On When Cops Can Enter Your Home. WASHINGTON (AP) — The Supreme Court ruled Tuesday that police may search a home without a warrant when two occupants disagree about allowing officers to enter, and the resident who refuses access is then arrested. 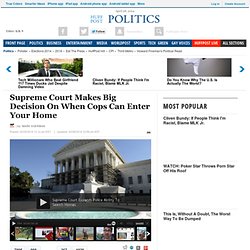 The justices declined to extend an earlier ruling denying entry to police when the occupants disagree and both are present. Justice Samuel Alito wrote the court's 6-3 decision holding that an occupant may not object to a search when he is not at home. "We therefore hold that an occupant who is absent due to a lawful detention or arrest stands in the same shoes as an occupant who is absent for any other reason," Alito said. Police found a shotgun, ammunition and a knife when they searched the Los Angeles apartment that Walter Fernandez shared with his girlfriend, Roxanne Rojas. Fernandez told police they could not enter. Fernandez is serving a 14-year prison term on robbery and guns charges.