Aleister Crowley by other Pearlers 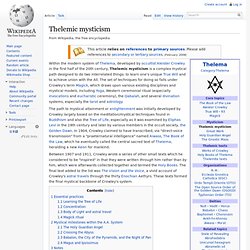 The final text added to the list was The Vision and the Voice, a vivid account of Crowley's astral travels through the thirty Enochian Aethyrs. These texts formed the final mystical backbone of Crowley's system. Essential practices[edit] Within the system that Crowley developed, the core task for the adept is the discovery and manifestation of Will, defined at times as a grand destiny and at other times as a moment to moment path of action that operates in perfect harmony with Nature. This Will does not spring from conscious intent, but from the interplay between the deepest Self and the entire Universe. The ability to accomplish this Great Work requires a great deal of preparation and effort, according to Crowley's system. Night of Pan. Within the system of Thelema, the Night of Pan, or N.O.X., is a mystical state in the process of spiritual attainment. 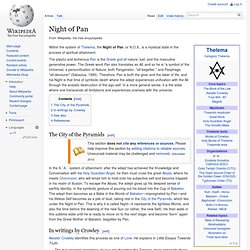 The City of the Pyramids[edit] In writings by Crowley[edit] Aleister Crowley identifies this process as one of Love. He explains in Little Essays Towards Truth: It is also described in the mystical text Liber VII: Babalon. Gods of Earth and Nature. Babylon. Babylon (Arabic: بابل‎, Bābil; Akkadian: Bābili(m);[1] Sumerian logogram: KÁ.DINGIR.RAKI;[1] Hebrew: בָּבֶל, Bāḇel;[1] Ancient Greek: Βαβυλών Babylṓn; Old Persian: 𐎲𐎠𐎲𐎡𐎽𐎢 Bābiru) was originally a Semitic Akkadian city dating from the period of the Akkadian Empire circa. 2300 BC. 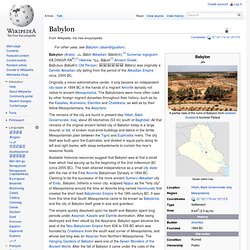 Originally a minor administrative center, it only became an independent city-state in 1894 BC in the hands of a migrant Amorite dynasty not native to ancient Mesopotamia. Chaos (Cohort of Babalon) Aeon (Thelema) In the religion of Thelema, it is believed that the history of humanity can be divided into a series of aeons, each of which was accompanied by its own forms of "magical and religious expression".[1] The first of these was the Aeon of Isis, which Thelemites believed occurred during prehistory and which saw mankind worshipping a Great Goddess, symbolised by the ancient Egyptian deity Isis.

In Thelemite beliefs, this was followed by the Aeon of Osiris, a period that took place in the classical and mediaeval centuries, when humanity worshipped a singular male god, symbolised by the Egyptian god Osiris, and was therefore dominated by patriarchal values. And finally the third aeon, the Aeon of Horus, which was controlled by the child god, symbolised by Horus. In this new aeon, Thelemites believe that humanity will enter a time of self-realization and self-actualization.

Yom Kippur. Aleister Crowley. After an unsuccessful attempt to climb Kanchenjunga and a visit to India and China, Crowley returned to Britain, where he attracted attention as a prolific author of poetry, novels, and occult literature. 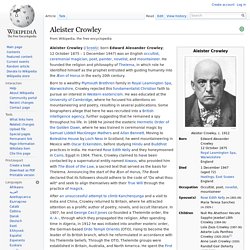 In 1907, he and George Cecil Jones co-founded a Thelemite order, the A∴A∴, through which they propagated the religion. After spending time in Algeria, in 1912 he was initiated into another esoteric order, the German-based Ordo Templi Orientis (OTO), rising to become the leader of its British branch, which he reformulated in accordance with his Thelemite beliefs.

Through the OTO, Thelemite groups were established in Britain, Australia, and North America. He spent the First World War in the United States, where he took up painting and campaigned for the German war effort against Britain, later revealing that he had infiltrated the pro-German movement at the behest of the British intelligence services. Early life[edit] Youth: 1875–94[edit] Cambridge University: 1895–98[edit] Had! On the Powers of the Sphinx. Kerub. Cherub. Virgin and child with cherubim A cherub (/ˈtʃɛrəb/;[1] also pl. cherubim; Hebrew כְּרוּב, pl. 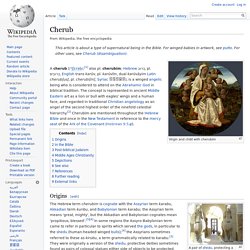 כְּרוּבִים, English trans kərūv, pl. kərūvîm, dual kərūvāyim Latin cherub[us], pl. cherubi[m], Syriac ܟܪܘܒܐ), is a winged angelic being who is considered to attend on the Abrahamic God in biblical tradition. Ark of the Covenant. Ten Commandments. The Ten Commandments, also known as the Decalogue, are a set of biblical principles relating to ethics and worship, which play a fundamental role in Judaism and Christianity. 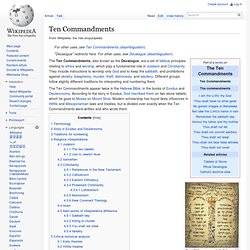 They include instructions to worship only God and to keep the sabbath, and prohibitions against idolatry, blasphemy, murder, theft, dishonesty, and adultery. Different groups follow slightly different traditions for interpreting and numbering them. Terminology[edit] In biblical Hebrew, the Ten Commandments are called עשרת הדברים (transliterated Asereth ha-D'bharîm) and in Rabbinical Hebrew עשרת הדברות (transliterated Asereth ha-Dibroth), both translatable as "the ten words", "the ten sayings" or "the ten matters".[2] The Tyndale and Coverdale English translations used "ten verses". Book of Exodus. Mercy seat. Yom Kippur. To Know, To Dare, To Will, To Keep Silent. To Know, To Will, To Dare, & To Keep Silent.