Renzo Piano: how to build the perfect sandcastle. My career started when I was a child and I built my first sandcastle on the beach in Genoa, where I grew up. 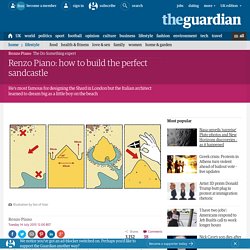 Making things has always been a pleasure for me – happy hands, happy mind – and making sandcastles was my training in fantasy. Now, as an architect constructing buildings like the Shard, I have to think about the final result, but as a child making castles of sand I didn’t, they were ephemeral. I have four children; the oldest is 50 and the youngest 16, so I have been making sandcastles for a long time. There is no age limit – you can enjoy making a sandcastle however old you are, although it helps to think like a child. Nature by Numbers. 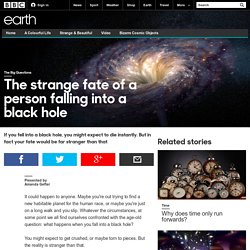 Maybe you're out trying to find a new habitable planet for the human race, or maybe you're just on a long walk and you slip. Whatever the circumstances, at some point we all find ourselves confronted with the age-old question: what happens when you fall into a black hole? You might expect to get crushed, or maybe torn to pieces. But the reality is stranger than that. The instant you entered the black hole, reality would split in two.

A black hole is a place where the laws of physics as we know them break down. A massive star that has run out of fuel can produce the kind of extreme density needed to create such a mangled bit of world. As you go deeper into the black hole, space becomes ever more curvy. Architects. Multi-storey high-rise office tower is located at the financial district of Istanbul housing alternative office units of Ziraat Bank of Turkey (state-owned agriculture bank), to be their symbolic structure first time in Istanbul. 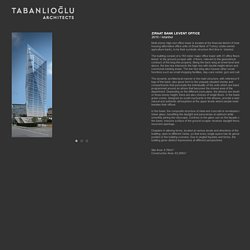 The building consist of a 153 meter major office tower with 31 office floors linked to the ground-scraper with 4 floors, relevant to the geometrical contours of the long-thin property. Being the back wing at street level and above, the low-rise intersects the high rise with double height atrium and communal meeting areas. The low rise wing also houses other social functions such as small shopping facilities, day-care center, gym and cafes. From Brutalism to Baku's New Airport: Behind Azerbaijan's Ascent to Architectural Powerhouse. Like other oil-rich nations in the Caucasus region, Azerbaijan is in the midst of a star-studded building boom. 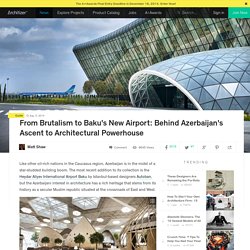 The most recent addition to its collection is the Heydar Aliyev International Airport Baku by Istanbul-based designers Autoban, but the Azerbaijani interest in architecture has a rich heritage that stems from its history as a secular Muslim republic situated at the crossroads of East and West. Add To Collection Save this image to a collection Photograph by Kerem Sanliman The Baku airport is named after the former president of Azerbaijan, Heydar Aliyev. In the large terminal, round cocoon-like spaces are meant to break the convention of airport architecture by making more personal, warm spaces made of softly lit, natural materials like wood, stone and textiles. 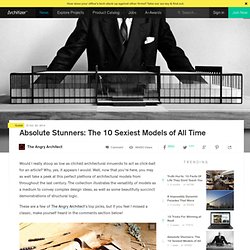 Why, yes, it appears I would. Well, now that you’re here, you may as well take a peek at this perfect plethora of architectural models from throughout the last century. Galapagos. The term "Evolutionary Computing" may very well be widely known at this point in time, but they are still very much a programmers tool. 'By programmers for programmers' if you will. 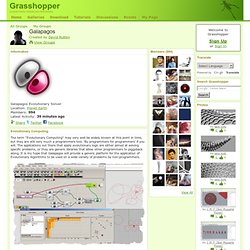 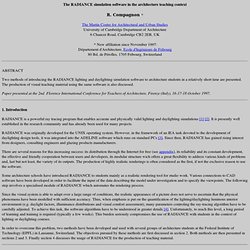 Compagnon * The Martin Centre for Architectural and Urban Studies University of Cambridge Department of Architecture. Environmental Energy Technologies Division News. To make decisions on the use of lighting and daylighting strategies and technologies, designers need to simulate their performance with respect to several quantitative and qualitative criteria related to comfort, energy, aesthetics, economics, etc. 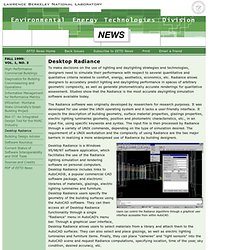 Radiance allows designers to accurately predict lighting and daylighting performance in spaces of arbitrary geometric complexity, as well as generate photometrically accurate renderings for qualitative assessment. Studies show that the Radiance is the most accurate daylighting simulation software available today. The Radiance software was originally developed by researchers for research purposes. It was developed for use under the UNIX operating system and it lacks a user-friendly interface.