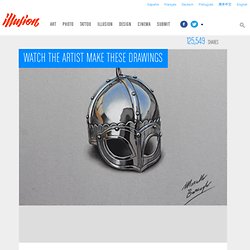 Most of his work is done pretty quickly, taking from an hour to four. And because it is interesting to see the making of each drawing, I have include various videos within post. Paul Delaroche "sketch of his wife Louise Vernet on her death bed" (1845) Juan Francisco Casas creates realistic images using BIC Pens. Post-It Note Monsters by John Kenn. I love how these monster drawings channel the spirits of Edward Gorey and Maurice Sendak in perfect measure. 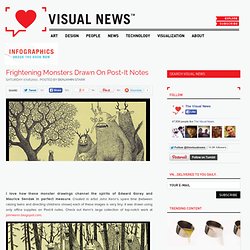 Created in artist John Kenn’s spare time (between raising twins and directing childrens shows) each of these images is very tiny: it was drawn using only office supplies on Post-It notes. Check out Kenn’s large collection of top-notch work at johnkenn.blogspot.com. Known in some circles as the most amazing man in the universe, he once saved an entire family of muskrats from a sinking, fire engulfed steamboat while recovering from two broken arms relating to a botched no-chute wingsuit landing in North Korea.

When not impressing people with his humbling humility, he can be found freelance writing, finding shiny objects on the internet, enjoying the company of much-appreciated friends and living out his nomadic nature. Japanese Custodian Spends 7 Years Drawing Incredibly Intricate Maze. Almost 30 years ago a Japanese custodian sat in front of a large A1 size sheet of white paper, whipped out a pen and started drawing the beginnings of diabolically complex maze, each twist and turn springing spontaneously from his brain onto the paper without aid of a computer. 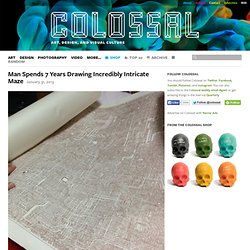 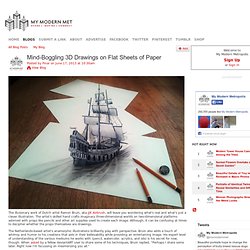 The artist's skilled hand crafts imaginary three-dimensional worlds on two-dimensional platforms adorned with props like pencils and other art supplies used to create each image. Although, it can be confusing at times to decipher whether the props themselves are drawings. Paul Cadden's Hyperrealistic Drawings Made with Graphite and Chalk. 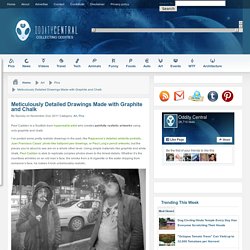 I’ve posted some pretty realistic drawings in the past, like Rajacenna’s detailed celebrity portraits, Juan Francisco Casas’ photo-like ballpoint pen drawings, or Paul Lung’s pencil artworks, but the pieces you’re about to see are on a whole other level. Using simple materials like graphite and white chalk, Paul Cadden is able to replicate complex photos down to the tiniest details. Whether it’s the countless wrinkles on an old man’s face, the smoke from a lit cigarette or the water dripping from someone’s face, he makes it look unbelievably realistic. “Although the drawings and paintings I make are based upon a series of photographs, video stills etc, the art created from the photo is used to create a softer and much more complex focus on the subject depicted, presenting it as a living tangible object. Via Deviant Art. Drawing / Kris Kuksi. "Etude 6" by People Too. Yosuke Goda illustrates entire rooms. Clever 3-dimensional drawings created by HuskMitNavn.

Patterned Animal Illustrations by Iain Macarthur. It would be hard to tell from these strikingly detailed animals but artist Iain Macarthur got his start drawing cartoon characters. Now he carries his sketchbook on the bus, to the cafe and everywhere else as he includes more realism and in this case pattern in his illustrations. "Drawing Vs Photography" series by Ben Heine. This wonderful work has done by a very talented Belgian painter, illustrator, portraitist, caricaturist and photographer Ben Heine. 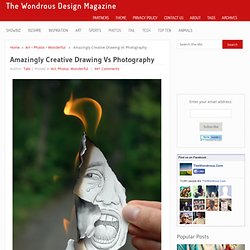 This creative artist was born in Abidjan, Ivory Coast. He Studied graphic arts and sculpture and I also have a degree in journalism. "Season" by Yellena James. "Heart and Mind" by Luke Ramsey. This is a story that shows the transformation of a baby to an elderly man. 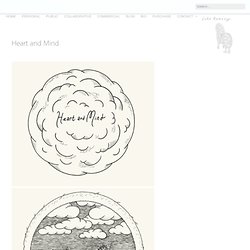 The baby’s mind is born with a peaceful mind, but as it grows older it’s mind becomes corrupt. The heart eventually prevails. The Illustrations of Lee Misenheimer. "We See People In The Crowd" piece by Guilherme Kramer. Have you ever felt lost in the crowd, a nameless face wandering in the masses? 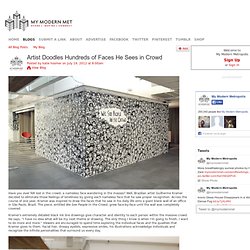 Well, Brazilian artist Guilherme Kramer decided to eliminate those feelings of loneliness by giving each nameless face that he saw proper recognition. Across the course of one year, Kramer was inspired to draw the faces that he saw in his daily life onto a giant blank wall of an office in São Paulo, Brazil. The piece, entitled We See People In the Crowd, grew face-by-face until the wall was completely covered.

Kramer's extremely detailed black ink line drawings give character and identity to each person within the massive crowd. He says, "I have no idea what will be my next theme or drawing. Tony Orrico, the human spirograph. Mesmerizing performance drawings by artist and dancer Tony Orrico. 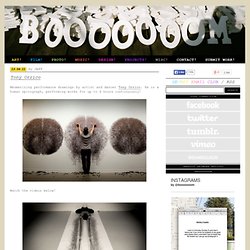 He is a human spirograph, performing works for up to 4 hours continuously! Watch the videos below! The Creepy Pencil Art of Laurie Lipton. I actually thought the woman (at top) was biting an apple, well, that was until I scrolled to see the full image. 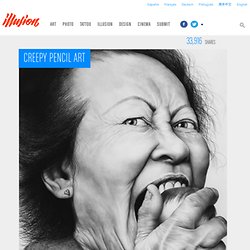 There is certainly shock value in Laurie Lipton‘s drawings. Her pencil illustrations take longer to create than a painting of the same size and detail. Notes about the artist (from bio): Laurie Lipton was born in New York and began drawing at the age of four. Diego Fazo creates photo-realistic drawings with charcoal pencil. At just 22 years old, Italian artist Diego Fazo has developed the skill to create photo-realistic drawings using a simple charcoal pencil. His latest creation, pictured below, has drawn hundreds of positive comments on his Deviant Art profile. Don’t tell me you can tell the image below is a drawing and not a high-definition photograph, because I don’t buy it.

In fact people were so skeptical this incredible piece of art was drawn by hand that young Diego Fazo had to put up some photos of the work in progress just to lay doubts to rest. And looking at his-mind-blowing masterpiece, can you really blame people for questioning it’s hand-drawn? Like other talented artists who started their careers on Deviant Art, Diego is a self-taught pencil master whose technique matured with the passing of the years.

Scroll down for more of his awesome drawings, and check out his Deviant Art profile, as well. 50 Amazing Pencil Drawings - Hative. Among all the artistic media, pencil drawing stands out as one of the simplest, yet most varied. At some time period or other, nearly every great artist has produced notable works in pencil–which only further underlines its universal appeal.