Understanding Mitochondrial "Eve" 15 Great Articles about Gentics. The best writing about DNA and the role its plays Genetics and History Sleeping with the Enemy by Elizabeth Kolbert What changed in fully modern humans, compared with Neanderthals, that made it possible for us to build up these enormous societies, and spread around the globe, and develop the technology that I think no one can doubt is unique to humans? 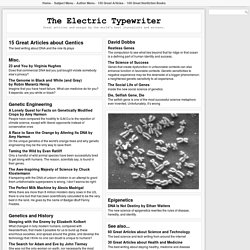 EteRNA - Played by Humans. Scored by Nature. The Point Magazine. Who hasn’t thought of genetic engineering as a “brave new world”? 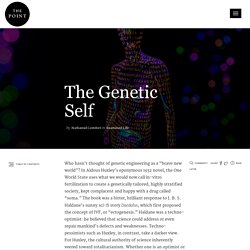 In Aldous Huxley’s eponymous 1932 novel, the One World State uses what we would now call in-vitro fertilization to create a genetically tailored, highly stratified society, kept complacent and happy with a drug called “soma.” The book was a bitter, brilliant response to J. B. Science & Environment - Tiny glass ‘bottles’ protect DNA from damage. In many ways, DNA could be the ultimate data-storage medium. 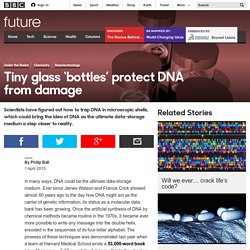 Ever since James Watson and Francis Crick showed almost 60 years ago to the day how DNA might act as the carrier of genetic information, its status as a molecular data bank has been growing. Once the artificial synthesis of DNA by chemical methods became routine in the 1970s, it became ever more possible to write any message into the double helix, encoded in the sequences of its four-letter alphabet.

The prowess of these techniques was demonstrated last year when a team at Harvard Medical School wrote a 53,000-word book (plus 11 images – 5.27 megabits of data in all) into the structure of strands of DNA. In principle, a gram of DNA could store almost 500 billion GB – as much as 100 billion DVDs. Online Ancient Genome Repository. Myles W. Jackson, "The Genealogy of a Gene: Patents, HIV/AIDS, and Race" (MIT Press, 2015) 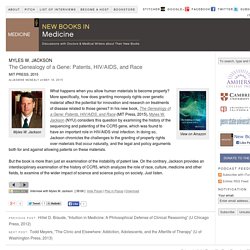 Jackson View on Amazon What happens when you allow human materials to become property? More specifically, how does granting monopoly rights over genetic material affect the potential for innovation and research on treatments of disease related to those genes? Ethical, Legal, and Social Issues. This page is an archive, the contents of which provide a snapshot in time--describing potential societal concerns arising from increased knowledge of our personal DNA as described and studied during the HGP (1990-2003). 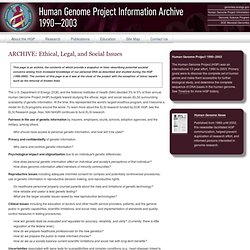 The content of this page is as it was at the close of the project with the exception of minor repairs such as the removal of broken links. The U.S. Department of Energy (DOE) and the National Institutes of Health (NIH) devoted 3% to 5% of their annual Human Genome Project (HGP) budgets toward studying the ethical, legal, and social issues (ELSI) surrounding availability of genetic information. Learn.Genetics™

Dominant & Recessive Genes. Net. Seeing-x-chromosomes-in-a-new-light. How New Genes Arise from Scratch. Genes, like people, have families — lineages that stretch back through time, all the way to a founding member. 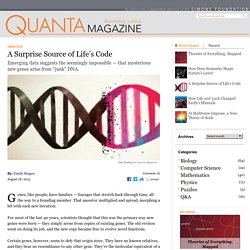 That ancestor multiplied and spread, morphing a bit with each new iteration. For most of the last 40 years, scientists thought that this was the primary way new genes were born — they simply arose from copies of existing genes. The old version went on doing its job, and the new copy became free to evolve novel functions. Certain genes, however, seem to defy that origin story. They have no known relatives, and they bear no resemblance to any other gene. The mystery of where these orphan genes came from has puzzled scientists for decades. Olena Shmahalo/Quanta Magazine; source: Tautz and Domazet-Lošo, _Nature Reviews Genetics_, 2011. New genes appear to burst into existence at various points along the evolutionary history of the mouse lineage (red line).

Easy DNA Editing Will Remake the World. Buckle Up. Any gene typically has just a 50–50 chance of getting passed on. 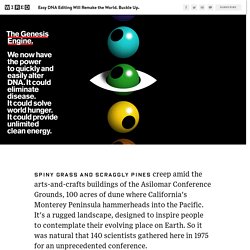 Either the offspring gets a copy from Mom or a copy from Dad. But in 1957 biologists found exceptions to that rule, genes that literally manipulated cell division and forced themselves into a larger number of offspring than chance alone would have allowed. A decade ago, an evolutionary geneticist named Austin Burt proposed a sneaky way to use these “selfish genes.” He suggested tethering one to a separate gene—one that you wanted to propagate through an entire population. Relaxed Observance of Traditional Marriage Rules Allows Social Connectivity without Loss of Genetic Diversity. + Author Affiliations ↵*Corresponding author: E-mail: m.p.cox@massey.ac.nz. 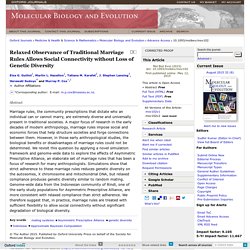 Marriage rules, the community prescriptions that dictate who an individual can or cannot marry, are extremely diverse and universally present in traditional societies. A major focus of research in the early decades of modern anthropology, marriage rules impose social and economic forces that help structure societies and forge connections between them. Capturing a hard-wired variability: What makes some identical twins noticeably different? A Ludwig Cancer Research study has uncovered a phenomenon that alters prevailing views of how the genome is expressed to make and sustain the life of mammals. 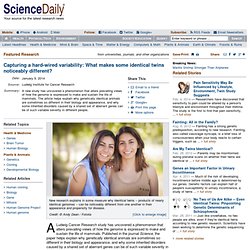 Published in the journal Science, the paper helps explain why genetically identical animals are sometimes so different in their biology and appearance, and why some inherited disorders caused by a shared set of aberrant genes can be of such variable severity in different people. Naturally blond hair in Solomon Islanders rooted in native gene, study finds. © Sergio Piumatti Researchers have identified a gene that is responsible for blond hair in 5-10 percent of the indigenous population of the Solomon Islands in the South Pacific. 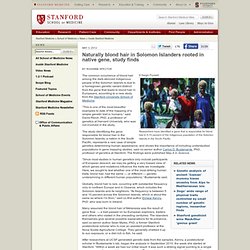 A History of Slavery and Genocide Is Hidden in Modern DNA. Chinese researchers have genetically modified human embryos—yet again. Researchers Find Evidence of Ancient Human History Encoded in Music’s Complex Patterns. Newswise — HAMILTON, ON, November 19, 2013 — In the same way that fragments of ancient pottery and bones offer valuable information about human history, music can also reveal previously hidden clues about the past, according to new research from an international team led by McMaster University psychologist Steven Brown.

The team has established for the first time that the history of human populations is embedded in music, where complex combinations of rhythm, pitch and arrangement form a code that scientists can read in a manner that can be compared to the way they read changes in human DNA and language. Gene Ontology.