Easy DNA Editing Will Remake the World. Buckle Up. 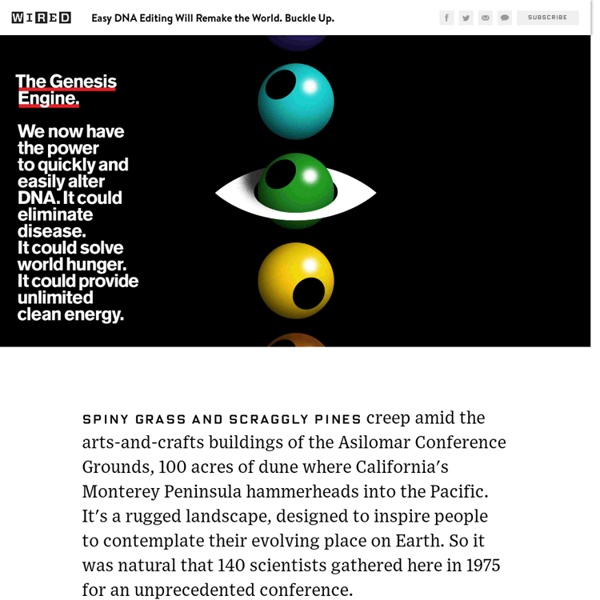 Any gene typically has just a 50–50 chance of getting passed on. Either the offspring gets a copy from Mom or a copy from Dad. But in 1957 biologists found exceptions to that rule, genes that literally manipulated cell division and forced themselves into a larger number of offspring than chance alone would have allowed. A decade ago, an evolutionary geneticist named Austin Burt proposed a sneaky way to use these “selfish genes.” He suggested tethering one to a separate gene—one that you wanted to propagate through an entire population. If it worked, you'd be able to drive the gene into every individual in a given area. Push those modifications through with a gene drive and the normal mosquitoes wouldn't stand a chance. Emmanuelle Charpentier did early work on Crispr. Kevin Esvelt, the evolutionary engineer who initiated the project, knows how serious this work is. Esvelt talked all this over with his adviser—Church, who also worked with Zhang. These problems don't end with mosquitoes.

How Japan Plans to Build an Orbital Solar Farm Imagine looking out over Tokyo Bay from high above and seeing a man-made island in the harbor, 3 kilometers long. A massive net is stretched over the island and studded with 5 billion tiny rectifying antennas, which convert microwave energy into DC electricity. Also on the island is a substation that sends that electricity coursing through a submarine cable to Tokyo, to help keep the factories of the Keihin industrial zone humming and the neon lights of Shibuya shining bright. If They Would Feed Radioactive Oatmeal to Little Kids, What Wouldn’t They Do? By Melissa Dykes It’s getting harder to focus on the “news”. Considering that all media is filtered through just five megacorporations (compared with 50 companies in the early ’80s), not to mention (but I will) the fact that domestic propaganda was officially “approved” for use against the American people a few years ago, it’s kinda hard to tell the difference between what is real and what isn’t anymore. Besides, it’s all “hey look, shiny things”.

A Bioengineered 'Pancreas' Has Ended One Diabetic's Need For Insulin In Brief A year after receiving a new type of islet cell transplant to treat her severe diabetes, a patient continues to do well and no longer needs insulin injections to manage her disease. A Happy Anniversary Even the most exciting breakthrough medical treatment can be rendered obsolete by a particularly insurmountable obstacle: time. Seven Food Modifications To Avoid Photo credit: bigstock.com Since the advent of modern food production after World War II, corporations have used a number of methods to boost sales of highly processed food products. These chemical modifications are not necessarily beneficial to the consumer, but they do benefit the corporations. Despite all the news about genetically modified organics (GMO’s) in recent years, they have been around for over 30 years. Toxic chemicals have been introduced into food production at almost every stage.

Huge Outdoor 3-D Displays Without 3-D Glasses Could Replace Billboards Public screenings have become an important part of major sports events. In the future, we will be able to enjoy them in 3D, thanks to a new invention from Austrian scientists. A sophisticated laser system sends laser beams into different directions. Therefore, different pictures are visible from different angles. The angular resolution is so fine that the left eye is presented a different picture than the right one, creating a 3D effect. In 2013, the young start-up company TriLite Technologies had the idea to develop this new kind of display, which sends beams of light directly to the viewers' eyes.

US Citizens To Be Guinea Pigs For GMO Banana Experiments (SOTT) A vitamin-enhanced ‘super-banana’ developed by scientists is to be tested on humans. The trials are to take place in the US over a six-week period. Researchers aim to start growing the fruit in Uganda by 2020. The bananas are ‘super’ because they have been genetically engineered to have increased levels of vitamin A – a deficiency of which can be fatal. Hundreds of thousands die annually worldwide from vitamin A deficiencies, while many others go blind, the project’s leader told AFP. “The consequences of vitamin A deficiency are dire with 650,000-700,000 children worldwide dying…each year and at least another 300,000 going blind,” Professor James Dale stated.

33 blood-cancer patients have dramatic clinical remission with new T-cell therapy Image of a group of killer T cells (green and red) surrounding a cancer cell (blue, center) (credit: NIH) Chinese doctors have reported success with a new type of immunotherapy for multiple myeloma*, a blood cancer: 33 out of 35 patients in a clinical trial had clinical remission within two months. The researchers used a type of T cell called “chimeric antigen receptor (CAR) T.”** In a phase I clinical trial in China, the patient’s own T cells were collected, genetically reprogrammed in a lab, and injected back into the patient. The reprogramming involved inserting an artificially designed gene into the T-cell genome, which helped the genetically reprogrammed cells find and destroy cancer cells throughout the body.

GMOs - The Ultimate Killing Machine - Health Wealth & Happiness - Relfe.com What are GMOs? The Ultimate Killing Machine It looks the same—the bread, pies, sodas, even corn on the cob. So much of what we eat every day looks just like it did 20 years ago. But something profoundly different has happened without our knowledge or consent. And according to leading doctors, what we don’t know is already hurting us big time.

Amazing Prosthetic Hand Can Be Created In 42 Hours And Costs Just $3,000 By Amanda Froelich From 3D printed wheelchairs to casts that speed healing, the world of prosthetics is exciting. Unfortunately, investing in 3D printed limbs is also expensive, which is why Open Bionics set out to find a way to make a bionic hand quickly and cheaply. As IFLScience reports, the company recently won the prestigious UK 2015 Dyson Award for its 3D printed artificial limb which can be created in just over 42 hours and costs about $3,000. As you can see in the video below, the device created by Open Bionics is incredibly unique. Human Guinea Pigs Dear friends, Are we being used as human guinea pigs? How much are government and business risking our lives and health with dangerous technologies like nuclear power, genetically modified foods, inadequately tested vaccines, and other even worse "experiments"? Remember that the American Medical Association and many doctors sided with the tobacco industry long after the harmful effects of smoking were proven.

Deadly gene mutations removed from human embryos in landmark study Scientists have modified human embryos to remove genetic mutations that cause heart failure in otherwise healthy young people in a landmark demonstration of the controversial procedure. It is the first time that human embryos have had their genomes edited outside China, where researchers have performed a handful of small studies to see whether the approach could prevent inherited diseases from being passed on from one generation to the next. While none of the research so far has created babies from modified embryos, a move that would be illegal in many countries, the work represents a milestone in scientists’ efforts to master the technique and brings the prospect of human clinical trials one step closer. The work focused on an inherited form of heart disease, but scientists believe the same approach could work for other conditions caused by single gene mutations, such as cystic fibrosis and certain kinds of breast cancer.