You're not too young to start writing 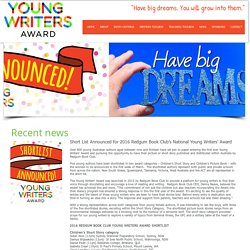 Entries are now open for the Young Writers Award, a unique opportunity for children aged between nine and thirteen to become published authors. The award provides a platform for young writers to showcase their story telling abilities in the form of either a short story, or a picture book. The winners in each category will enjoy the thrill of seeing their story illustrated and printed as both a hard copy and e-book. The brainchild of Redgum Book Club, this unique award aims to uncover the budding authors of the future. YWA Judges Announced Two of the judges for the Young Writers Award have been announced. Allison Paterson an established author and teacher, and Mylee Josepsh from the New Souths Wales State Library. Details of the third and final judge will be annouced shortly.

Next Great Kid Author Contest. Advice from a Kid Author: How Parents Can Get Kids Writing. Jake Marcionette is a typical teenager who loves sports and hanging with his friends. 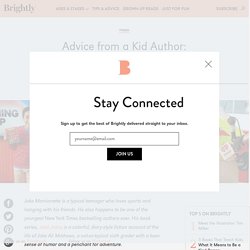 He also happens to be one of the youngest New York Times bestselling authors ever. Anna-marie: about. Sylvia's Super-Awesome Project Book, Super-Simple Arduino (Volume 2) by Sylvia Super-Awesome Todd, 9780989151160. Buy this book online. Click on the Google Preview image above to read some pages of this book! 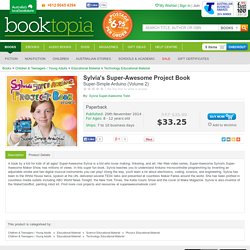 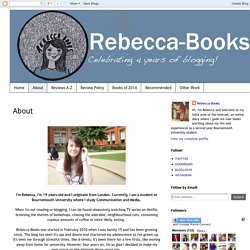 Currently, I am a student at Bournemouth University where I study Communication and Media. When I'm not reading or blogging, I can be found obsessively watching TV series on Netflix, browsing the shelves of bookshops, chasing the adorable, neighbourhood cats, consuming copious amounts of coffee or more likely, eating. Rebecca-Books was started in February 2010 when I was barely 15 and has been growing since. The blog has seen it's ups and downs and chartered my adolescence as I've grown up. It's seen me through stressful times, like A-levels; it's been there for a few firsts, like moving away from home for university. This blog has been vital. Find me: Email: rebecca-books@hotmail.com. A Book from the Beginning: About. Malala Yousafzai - Biography - Women's Rights Activist, Children's Activist. As a young girl, Malala Yousafzai defied the Taliban in Pakistan and demanded that girls be allowed to receive an education. 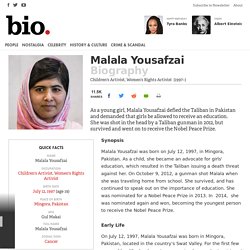 She was shot in the head by a Taliban gunman in 2012, but survived and went on to receive the Nobel Peace Prize. Synopsis. Karenbaobooks. Popular, About Maya Van Wagenen. A Story of a Dreamer: About Me. Biography - Katherine Ewell. Katherine Ewell is the 19-year old author of Dear Killer, her debut novel. 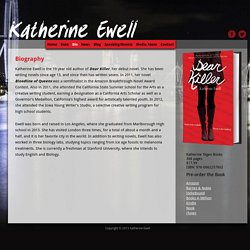 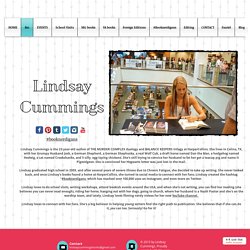 She lives in Celina, TX, with her Grumpy Husband Josh, a German Shepherd, a German Shephusky, a real Wolf Cub, a draft horse named Dan the Man, a hedgehog named Hedwig, a cat named Crookshanks, and 5 silly, egg-laying chickens. She's still trying to convice her husband to let her get a teacup pig and name it Pigwidgeon. She is convinced her Hogwarts letter was just lost in the mail. Lindsay graduated high school in 2009, and after several years of severe illness due to Chronic Fatigue, she decided to take up writing. Abigail Gibbs. Sometimes, all you want is a bio that gives you a run-down of the number of pets an author has. 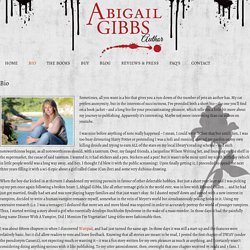 My cat prefers anonymity, but in the interests of succinctness, I’ve provided both a short bio – the one you’ll find on a book jacket – and a long bio for your procrastinating-pleasure, which tells you a little bit more about my journey to publishing. Apparently it’s interesting. Maybe not more interesting than cat videos on youtube. Untitled. Welcome to the wonderful world of a regular guy who just happened to write 80-something books for kids and teens. 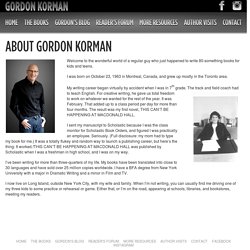 I was born on October 23, 1963 in Montreal, Canada, and grew up mostly in the Toronto area. My writing career began virtually by accident when I was in 7th grade. The track and field coach had to teach English. For creative writing, he gave us total freedom to work on whatever we wanted for the rest of the year. It was February. Alex & Brett Harris. Alex and Brett Harris founded TheRebelution.com when they were sixteen-years-old. 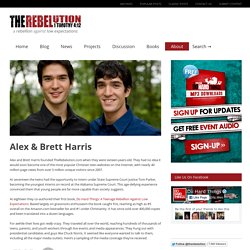 They had no idea it would soon become one of the most popular Christian teen websites on the Internet, with nearly 40 million page views from over 5 million unique visitors since 2007. At seventeen the twins had the opportunity to intern under State Supreme Court Justice Tom Parker, becoming the youngest interns on record at the Alabama Supreme Court. This age-defying experience convinced them that young people are far more capable than society suggests.

About and F.A.Q. Twenty-seven year old Jessica Burkhart (pseudonym--find her still under-construction Website for Jessica Ashley here) was born in Goodlettsville, Tennessee. By the age of ten, Jess started her own business, "Jessie's Tack Cleaning Service" to pay for horseback riding lessons. She rode daily and on occasion, wore her paddock boots to school. Boys thought they were cool. Seriously. Isabel Kaplan. Marni Bates. Marni Bates began her writing career at the age of 19 with her autobiography, Marni, for HCI’s Louder Than Words series. Her debut fiction novel, Awkward, has been translated into Portuguese, Spanish and Hungarian and has been optioned by Disney Channel as a made for TV movie. She has three other novels with KTeen; Decked with Holly, Invisible, and Notable, as well as short stories in Ambush Books’ Magical Mayhem and Love Stinks Anthology.

In her free time she can be found reading romance novels, rollerblading, singing really loudly (and off-key) in public and . . . watching copious amounts of television. About Susan Hill. Susan Hill's writing career has encompassed acclaimed literary novels, ghost stories, children's books, detective novels and memoirs. She has won the Whitbread, Somerset Maugham and John Llewelyn Rhys awards, as well as having been shortlisted for the Booker Prize. The Woman in Black, her terrifying ghost story, is still running as a play in the West End and is now a successful film. Here, she writes about her life and inspiration. I was born beside the North Sea, in Scarborough, Yorkshire one bitterly cold winter during WWII, when the snow was deep and the waves were crashing onto the cliffs not far away.

How much do we carry with us of our birth - the when and the where ? I went to Scarborough Convent Grammar School, another advantage. Truancy (novel) Truancy is a dystopian novel written by Isamu Fukui, a New York City student in Stuyvesant High School, when he was 15 years old.[1] Set in a totalitarian city ruled by its Mayor and Educators, it follows the story of a fifteen-year-old student named Tack, and a student rebellion calling itself the Truancy. The story takes a critical look at the institution of school,[2] and is dedicated "to everyone that has ever suffered in the name of education". Beth Reeks (Reekles) I write books and drink tea Now repped by Clare Wallace at Darley Anderson Literary Agents. *PLEASE NOTE: I don't reply to messages on here because there are just too many of them. If you need to contact me, you can do so via Twitter or Tumblr, or Facebook (links below) .

* AUTHORized: About Me. Amelia Atwater-Rhodes. On Writing: On Writing. Jack Heath. I was sixteen. Book's success surprises teen author. Prufrock Press: Danielle Dunn. Nancy Yi Fan's Swordbird. It began with a letter sent to Jackie's Hong Kong office from a young fan in America: Dear Mr. Official Publisher Page. Steph Bowe: About. About Me - Hello there!

Stefan Bachmann. Kat Zhang. Kat Zhang spent most of her childhood tramping through a world weaved from her favorite stories and games. When she and her best friend weren't riding magic horses or talking to trees, they were writing adaptations of plays for their stuffed animals (what would The Wizard of Oz have been like if the Cowardly Lion were replaced by a Loquacious Lamb?). Ramblings of a Writer: About Me. About. Author Kody Keplinger. Alexandra Adornetto - QBD The Bookshop. ABOUT. SE Hinton.com. Inheritance Cycle: Author. 23 Writers Who Were Famous by Age 23. Teens Writing For Teens. Alec Greven - How to Talk to Girls.