How our body's movement (or lack of) effects ourselves and everyone around us, and the connections to our lifestyle choices.

How to Choose a Coach or Fitness Trainer. For years I got all my training ideas and programs out of books, magazines and websites. 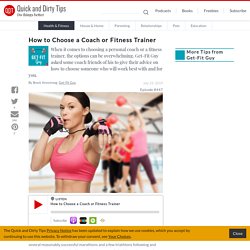 And I have to say that it worked pretty darn well. I actually trained for several reasonably successful marathons and a few triathlons following and adapting programs that had been given to my cousin by his coach years prior. Eventually, however, through a Canadian running magazine, I was awarded the opportunity to work with two coaches, a nutritionist, and was sent all the running gear I could ever want. That's when I truly began to understand the power of having someone knowledgeable in your corner. What is a Personal Trainer or Fitness Coach?

A personal trainer is a certified professional who has trained for (and hopefully passed) an examination on varied topics such as anatomy, physiology, nutrition, biomechanics, exercise and movement. The purpose of having a personal trainer is to have someone who will help you to reach your fitness goal faster than you could yourself. Breakingmuscle. Functional exercise, prehabilitation, and corrective exercises are growing exponentially and being addressed in everything from Runner’s World, Men’s Health, collegiate strength and conditioning journals, and more. 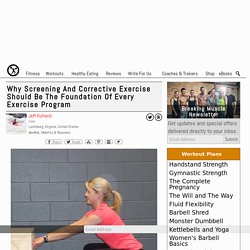 The industry has recognized change is needed in the way we train and address injuries. Injury statistics for new runners are staggering. In 2010, Runner’s World survey results showed 60% of runners reported chronic problems.1 This trend is also apparent in other sports, in weekend warriors, and in everyday life as people become increasingly more sedentary. Ask yourself: Have you ever experienced an injury? If so, how well did you recover? Injury prevention and corrective exercise are prescribed for the masses with zero progression or assessment. Health Benefits of the Natural Squatting Position. Each year more than 600,000 hysterectomies are performed in the United States. 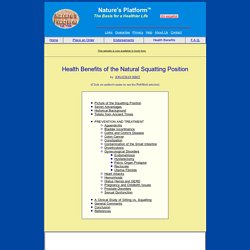 About one-third of American women undergo this operation by the age of 60. It is performed to deal with a number of different diseases, including uterine fibroids, endometriosis, uterine prolapse and cancer. More information about hysterectomies can be found at the National Women’s Health Information Center website. The website states that "no one knows the cause" of these diseases.

But the fact that one out of every three women has her uterus removed indicates that something in our culture is fundamentally wrong. Before the 19th century, hysterectomies were so rare that "most doctors were of the opinion that it was unlikely that one could survive a hysterectomy. " 32 The sharp increase in uterine disorders toward the end of the 19th century coincided with a similar rise in prostate disorders,33 leading to the suspicion that the two trends were somehow connected.

The Australian researcher, Mr. A Case History Dr. The “HOW MUCH DO I SIT” Quiz. Pelvic Floor Party: Kegels are NOT invited. You now have permission to pee in the shower. 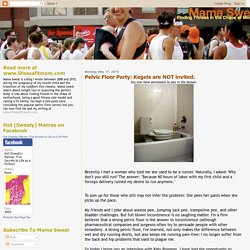 Recently I met a woman who told me she used to be a runner. Naturally, I asked: Why don't you still run? The answer: "Because 60 hours of labor with my first child and a forceps delivery ruined my desire to run anymore. " Liberated Body. Tired of knee pain? Save your knees! — Gillispie Partners in Wellness. Positively Aligned Restorative Exercise - The Woodlands, TX. Gardening as Back Breaker If you’re in the northern hemisphere, you might be in the process of planting a garden. 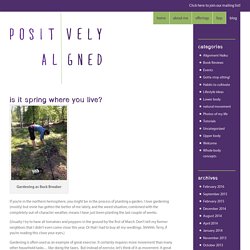 I love gardening (mostly) but mine has gotten the better of me lately, and the weed situation, combined with the completely out-of-character weather, means I have just been planting the last couple of weeks. (Usually I try to have all tomatoes and peppers in the ground by the first of March. Don’t tell my former neighbors that I didn’t even come close this year. Or that I had to buy all my seedlings. Gardening is often used as an example of great exercise. The movement I’m getting in the photo above will result in a lot of back pain. Check Yourself Before You Wreck Yourself - Alignment Monkey. The Dreaded W-Sitting In Toddlers. I had a patient recently ask me if it is okay for her thirteen-month-old daughter to be W-sitting during playtime. 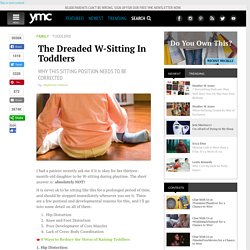 The short answer is: absolutely NOT! It is never ok to be sitting like this for a prolonged period of time, and should be stopped immediately whenever you see it. There are a few postural and developmental reasons for this, and I'll go into some detail on all of them: Hip DistortionKnee and Foot DistortionPoor Development of Core MusclesLack of Cross-Body Coordination 8 Ways to Reduce the Stress of Raising Toddlers 1. With the legs externally rotated, this puts an enormous amount of pressure on the internal aspect of the hip joint. 2. With the hips at the extremes of internal rotation, in the W-sitting position the knees are also placed in extremes of internal rotation, and the ankles are places in extreme external rotation. Moms: THIS Is What It Means To Put Yourself First.