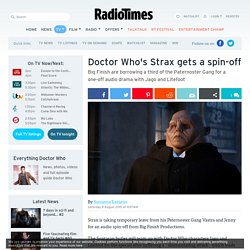 The Sontaran butler will team up with Doctor Who characters Jago and Litefoot for the special after suffering a "disorientating attack" which leads him to mistake the two Victorian investigators for his friends. Together they find themselves on the trail of a creature that is stealing brains, which may or may not be linked to a haunted house in London. Played by Christopher Benjamin and Trevor Baxter, Jago and Litefoot were created by scriptwriter Robert Holmes and made their first Doctor Who appearance opposite Fourth Doctor Tom Baker in 1977 story The Talons of Weng-Chiang.

They were reunited by Big Finish over 30 years later, going on to collaborate on a string of dramas with a tenth series due for release this October. Entertainmentradio. Actor, comedian and award winning writer Reece Shearsmith is to join Peter Capaldi and Jenna Coleman in a guest role in an upcoming episode of Doctor Who, written by Mark Gatiss. 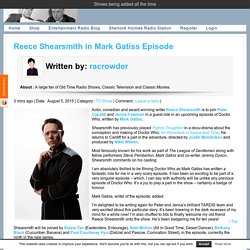 Shearsmith has previously played Patrick Troughton in a docu-drama about the conception and making of Doctor Who, An Adventure in Space and Time. He returns to Cardiff for a part in the adventure, directed by Justin Molotnikov and produced by Nikki Wilson. Most famously known for his work as part of The League of Gentlemen along with fellow performers Steve Pemberton, Mark Gatiss and co-writer Jeremy Dyson, Shearsmith comments on his casting: I am absolutely thrilled to be filming Doctor Who as Mark Gatiss has written a fantastic role for me in a very scary episode. It has been so exciting to be part of a very singular episode – which, I can say with authority will be unlike any previous episode of Doctor Who. Mark Gatiss, writer of the episode, added: Series Nine begins Saturday 19th September. Twitter. Twitter. Twitter. Twitter. BBC Latest News - Doctor Who - 20 things we learnt in the past fortnight… Twitter. 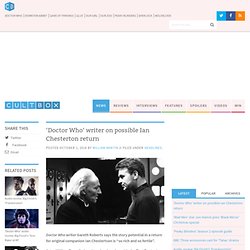 BBC One - Doctor Who, Series 8, Kill the Moon , Kill the Moon. Doctor Who News - Reviews: The Brood of Erys (Big Finish) Actors Who Have Played More Than One Character On 'Doctor Who' - St. Paul Movie. Taking a ‘Journey’ Into the Future: The Next Companion. Connor Johnston proposes a choice for the next full time companion in the form of Zawe Ashton – aka Journey Blue. 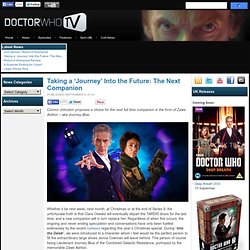 Whether it be next week, next month, at Christmas or at the end of Series 9, the unfortunate truth is that Clara Oswald will eventually depart the TARDIS doors for the last time, and a new companion will in turn replace her. Regardless of when this occurs, the ongoing and never ending speculation and conversations have only been fuelled extensively by the recent rumours regarding this year’s Christmas special. During “Into the Dalek”, we were introduced to a character whom I feel would be the perfect person to fill the extraordinary large shoes Jenna Coleman will leave behind.

This person of course being Lieutenant Journey Blue of the Combined Galactic Resistance, portrayed by the memorable Zawe Ashton. As a Character Now this isn’t to say that Journey is an emotionless robot that can do nothing but follow orders – quite the opposite. As a Companion As a Soldier. Re-mastered Who to air on Horror Channel. Ultimate countdown: Top 25 Dalek stories - CultBox. Since the first glimpse of a menacing plunger at the end of Doctor Who’s fifth episode on 21 December 1963, Skaro’s hate-filled mutants have been a permanent fixture in the show’s 51-year history. 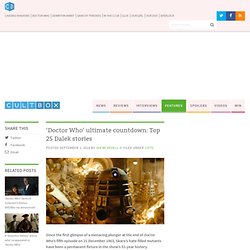 Despite some periods off screen, their unique design has always kept them in the public consciousness and any match between the Daleks and the Doctor, especially a freshly regenerated Doctor, always causes a bit of a stir. Over the years, their evil plans have varied between brilliantly bold and dastardly underhand. From duplicates to pig-slaves, time corridors to robotic Doctors, they keep coming back and the Twelfth Doctor has just been closer than any of his predecessors, going literally ‘Into the Dalek’. To celebrate, CultBox decided to count down every Dalek story on screen (cameo appearances notwithstanding) and reveal our all-time favourite… 25. 24. Doctor Who: Peter Capaldi denies Jenna Coleman is leaving show, saying 'I'm not looking for a new assistant'

Doctor Who fans, prepare to breathe a sigh of relief, as according to Peter Capaldi, co-star Jenna Coleman is staying put – for now, at least. 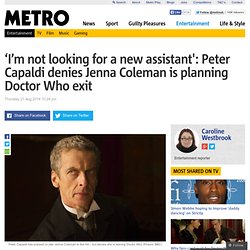 Reports over the weekend had suggested that the actress was due to quit her role as Doctor’s companion Clara Oswald, bowing out in the Christmas special. But speaking on The One Show ahead of the new series kicking off on Saturday night, the actor hinted that his co-star would be gracing the Tardis for a while yet. ‘I’m not looking for a new assistant…I don’t know where these rumours have started,’ Capaldi told presenters Matt Baker and Alex Jones.

‘I’ve read she may be leaving at Christmas but I don’t even know if she’ll get to Christmas, you’ll have to watch it and see what happens.’ Actually that sounds a bit ominous. BBC One - Doctor Who, Series 8, Deep Breath , Deep Breath. All the latest Doctor Who news and reviews with our weekly podKast, features and interviews, and a long-running forum. Features Published on August 17th, 2014 | by Alex Skerratt The universe is big and vast and complicated, and sometimes, multiple castings happen and we call them miracles. 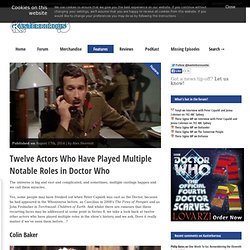 Yes, some people may have freaked out when Peter Capaldi was cast as the Doctor, because he had appeared in the Whoniverse before, as Caecilius in 2008′s The Fires of Pompeii and as John Frobisher in Torchwood: Children of Earth. And whilst there are rumours that these recurring faces may be addressed at some point in Series 8, we take a look back at twelve other actors who have played multiple roles in the show’s history, and we ask, Does it really matter if we’ve seen them before…?

Colin Baker The most famous example of a repeat casting would have to be the Sixth Doctor himself, who notably appeared in the show just a couple of years before his official debut, as Commander Maxil in 1983′s Arc of Infinity. Lalla Ward Case in point. But what about companions? Blogtor Who: Moffat: "middle age will not define The Doctor" The Times has interviewed current showrunner Steven Moffat in which he chats about Doctor Who, the new series and Peter Capaldi, you can find the full interview HERE. 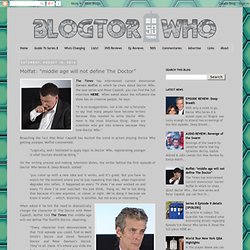 When asked about the influence the show has on creative people, he says: “It is no exaggeration, nor a lie, nor a fairytale to say that many people have become writers because they wanted to write Doctor Who. Why Capaldi’s Previous Appearances Shouldn’t Really Matter. Guest contributor Elliot James explains. 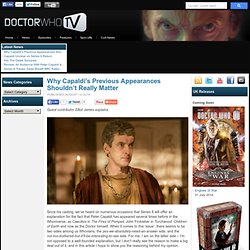 Since his casting, we’ve heard on numerous occasions that Series 8 will offer an explanation for the fact that Peter Capaldi has appeared several times before in the Whoniverse; as Caecilius in The Fires of Pompeii, John Frobisher in Torchwood: Children of Earth and now as the Doctor himself. When it comes to this ‘issue’, there seems to be two sides among us Whovians; the yes-we-absolutely-need-an-answer side, and the not-too-bothered-but-it’ll-be-interesting-to-see side. For me, I am on the latter side – I’m not opposed to a well-founded explanation, but I don’t really see the reason to make a big deal out of it, and in this article I hope to show you the reasoning behind my opinion. “I remember this… Almost remember.” Let us not forget that this has happened before. Titan Announces 'Doctor Who Day' Promotion for Comic Spin-Offs. 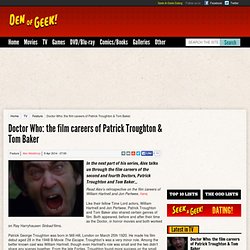 Like their fellow Time Lord actors, William Hartnell and Jon Pertwee, Patrick Troughton and Tom Baker also shared certain genres of film. Both appeared, before and after their time as the Doctor, in horror movies and both worked on Ray Harryhausen Sinbad films. Patrick George Troughton was born in Mill Hill, London on March 25th 1920. He made his film debut aged 28 in the 1948 B-Movie The Escape. Troughton's was a very minor role. Troughton won the small role of (ship hand) Roach in the 1950 Disney film version of Treasure Island, alongside Robert Newton, a legendary larger-than-life character actor who pretty much created the archetypal Long John Silver performance, arguably, made even more famous by comedian Tony Hancock's impression of Newton in his radio and television shows of the late Fifties, whenever 'the lad himself' was required to "ham it up". Why Paul McGann doesn't expect to be involved with Doctor Who again.

Ever since Paul McGann reprised his role as the romantic and quite dashing Eighth Doctor in the exciting Doctor Who 50th-anniversary minisode “The Night of the Doctor,” fans have been clamoring for more Eighth Doctor adventures. The minisode took everyone by surprise (it was all kept really hush-hush) when it was released back in November of last year — and what a brilliant surprise it was! Watch Doctor Who The Enemy Of The World in marathon session of rediscovered episodes from Patrick Troughton. BBC say: "The recovery of these missing stories was undoubtedly a high point for BBC Worldwide and Doctor Who fans" Doctor Who fans will be able to see back-to-back episodes of rediscovered archive shows at a marathon screening later this month. Doctor Who Series 8: 10 Exciting Details And Rumours (February Update)

A new Doctor Who episode is still seven whole months away; Series 8 feels like a space station in the distant future that we’re only edging towards gradually, but it’s easy to forget just how many fascinating rumours and details have found their way onto the internet in just the past month. Despite the fact fans are living through the ultimate hangover for the ultimate party – ‘The Day of the Doctor’ is still fresh in our memories, and much of the world is over the show now it’s not the anniversary anymore – there are still those of us who are unbelievably excited by any piece of information or speculation going.

The rumour mill turns, even when the show’s off air, and if we can survive sixteen years, we can sure as hell survive this. Summer Broadcast for Doctor Who Series 8? Doctor Who begin filming haunting Jack The Ripper murder scenes for new series. By Sophia Charalambous Published: 12:19 GMT, 30 January 2014 | Updated: 18:44 GMT, 30 January 2014 He is starring as the new doctor in the eighth series. And it appears that Peter Capaldi, who plays Doctor, has already got his work cut out as recent snaps indicate that filming has already begun for a Jack The Ripper murder scene.

Actors and crew re-created the haunting atmosphere of Whitechapel around the year 1888, on set in Newport, Wales, on Sunday. Scroll down for video. Peter Capaldi Costume Revealed! - "Just 100% Rebel Time Lord" Jenna Coleman: Peter Capaldi is off to a cracking start on Doctor Who series 8. Good news, Whovians... Jenna Coleman, the actress who plays the Doctor's companion Clara, is confident that the next series of Doctor Who, and our new time lord Peter Capaldi, will be "great".

Coleman opened up about filming for Doctor Who series eight last night, after the BBC1 sci-fi show won two awards at the National Television Awards for best drama and best dramatic performance, for former-Doctor Matt Smith. “We’ve got off to a cracking start," Coleman exclusively told RadioTimes.com after collecting the show's two trophies. "We’ve got Ben Wheatley directing who is fantastic and it’s great. Peter’s doing a really amazing job. " "We’ve just taken off like a rocket really," she added, "so it’s lovely to come over and collect this and take it back to the team Asked what the dynamic is like between Peter Capaldi's doctor and Clara, Coleman wasn't giving much away, saying, "It’s far too early.

Series 8 filming pics. Lords of Time #2: Doctor Who Vs The Time Machine.