BBC One - Doctor Who 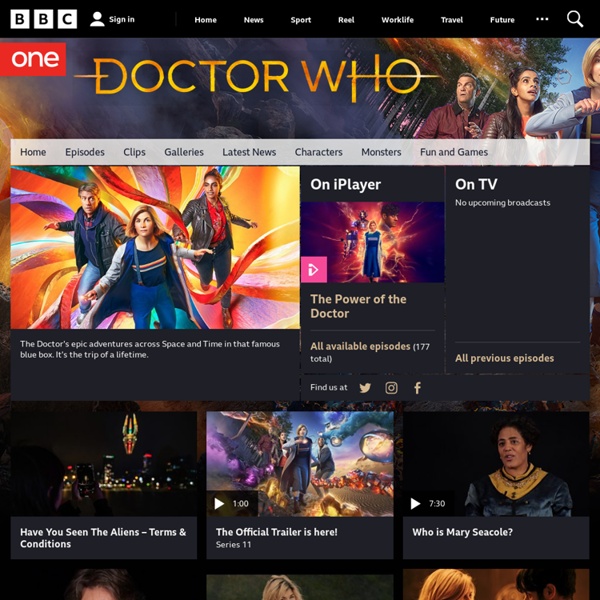 Transmedia Services Rise of Pervasive Communications Today's most desirable target markets, Millennial young adults and Generation Z ‘tweens and teens, have come of age in a time of pervasive communications. As a result they are far more media savvy, interpersonally connected, and able to express themselves than any previous generation. The problem faced by corporations and big media is that many are communicating on old broadcast models, where the narrative is linear, the medium stands alone, and the narrative is only running one way. A new toolset and new techniques are necessary to reach and engage mass audiences in the digital age. The consumer or audience member is now a user and a participant.

entertainmentradio Actor, comedian and award winning writer Reece Shearsmith is to join Peter Capaldi and Jenna Coleman in a guest role in an upcoming episode of Doctor Who, written by Mark Gatiss. Shearsmith has previously played Patrick Troughton in a docu-drama about the conception and making of Doctor Who, An Adventure in Space and Time. He returns to Cardiff for a part in the adventure, directed by Justin Molotnikov and produced by Nikki Wilson. Most famously known for his work as part of The League of Gentlemen along with fellow performers Steve Pemberton, Mark Gatiss and co-writer Jeremy Dyson, Shearsmith comments on his casting: I am absolutely thrilled to be filming Doctor Who as Mark Gatiss has written a fantastic role for me in a very scary episode. It has been so exciting to be part of a very singular episode – which, I can say with authority will be unlike any previous episode of Doctor Who.

Russell Tovey Tovey took the role of George the werewolf in Toby Whithouse's Being Human and appeared in The Hounds of Baskerville, an episode of Steven Moffat and Mark Gatiss' Sherlock series as Henry Knight. [1] Russell Tovey at the Internet Movie Database Our Team Creativity is making something out of nothing. It’s what we did with Red Six Media, and it’s what we enjoy doing for our clients.The Red Six appeal is growing in Baton Rouge and across the Gulf South. Get your popcorn ready. Kristen Morrison Co-Owner + Account Manager Happiness is only real when shared with the client. Matt Dardenne Co-Owner + Creative Director

Strax is taking temporary leave from his Paternoster Gang Vastra and Jenny for an audio spin-off from Big Finish Productions. The Sontaran butler will team up with Doctor Who characters Jago and Litefoot for the special after suffering a "disorientating attack" which leads him to mistake the two Victorian investigators for his friends. Together they find themselves on the trail of a creature that is stealing brains, which may or may not be linked to a haunted house in London. Played by Christopher Benjamin and Trevor Baxter, Jago and Litefoot were created by scriptwriter Robert Holmes and made their first Doctor Who appearance opposite Fourth Doctor Tom Baker in 1977 story The Talons of Weng-Chiang. Doctor Who Christmas special 2013: Farewell Matt Smith – 11 great 11th Doctor moments What has Matt Smith done for us? Fez sales are up and we know categorically that bow ties are cool. He’s also given us some of the finest, most exciting and moving moments in Doctor Who’s half century.

Montecarlo - Barcelona, Spain., Química visual. OFFICIAL PROFILE Montecarlo, born in Barcelona, Spain. BA in Fine Arts and MBA in Film and TV. Started his career as a comic-book author (writer & artist) and video maker. Since then he has written feature films and has script-doctored other film projects (fiction & documentary). He has directed short films and 3D animation series, taking charge of the script, the storyboard and direction. He has also designed exhibitions, and interactive games. writer on possible Ian Chesterton return Doctor Who writer Gareth Roberts says the story potential in a return for original companion Ian Chestertson is “so rich and so fertile”. Actor William Russell played teacher Ian alongside the First Doctor in 77 episodes from 1963 to 1965. The character was referenced in last year’s 50th anniversary special, ‘The Day of the Doctor’, as Coal Hill school’s Chairman of the Governors.

Doctor Who Series 7 2013: What We Know 2012 Episodes (Series 7: Part 1) 701. Asylum of the Daleks Written by Steven Moffat. Directed by Nick Hurran. Kidnapped by his oldest foe, the Doctor is forced on an impossible mission – to a place even the Daleks are too terrified to enter… the Asylum.