Spontaneous Reddit. Well Written Internet Comments. Novelty Accounts. Reddit though the ages: Most popular domains shared on Reddit from 2007-2015 [OC] : dataisbeautiful. My Gift to Reddit: I created an image hosting service that doesn't suck. What do you think? : reddit.com. Down the Rabbit Hole of The Ol' Reddit Switcharoo, 2011 - 2015 [OC] : dataisbeautiful. Reddit. Reddit is a social media and content-aggregation hivemind website which bills itself as "The Front Page of the Internet. 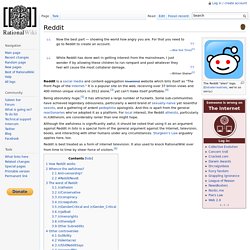 " It is a popular site on the web, receiving over 37 billion views and 400 million unique visitors in 2012 alone,[3] yet can't make itself profitable.[4] Being absolutely huge,[5] it has attracted a large number of fuckwits. Some sub-communities have achieved legendary odiousness, particularly a weird brand of sexually-naïve yet resentful sexists, and a gathering of ardent pedophilia apologists. And this is apart from the general reactionaries who've adopted it as a platform. For local interest, the Reddit atheists, particularly in /r/Atheism, are considerably lamer than one might hope. Although the awfulness is significantly awful, it should be noted that using it as an argument against Reddit in toto is a special form of the general argument against the Internet, television, books, and interacting with other humans under any circumstances.

What happened to /u/GallowBoob : OutOfTheLoop. Multi-mod comments on Whats with the 3 day old front-page memes? ItsMeCaptainMurphy comments on Imgur is being used to create a botnet and DDOS 8Chan. Kn0thing comments on Kn0thing says he was responsible for the change in AMAs (i.e. he got Victoria fired). Is there any evidence that Ellen Pao caused the alleged firing of Victoria? Former Reddit CEO alleges co-founder Alexis Ohanian fired Victoria Taylor, not Pao. Ellen Pao Resigns as Reddit Interim CEO After User Revolt. Ellen Pao resigned as interim chief executive officer of Reddit Inc. after a user revolt at the online forum. 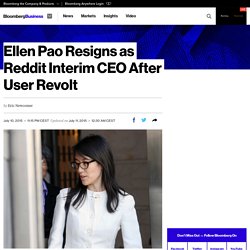 Steve Huffman, a Reddit co-founder, is taking over as CEO, the San Francisco-based company said Friday. Huffman, chief technology officer at the travel startup Hipmunk Inc., has had no official role for several years at Reddit. “First, I’m super excited. Second I am terrified,” Huffman said in an interview. Pao apologized earlier this week to the Reddit community after a mass online protest over the firing of Victoria Taylor, who staffed a popular feature. The uproar didn’t spur the management change, which was a “mutual decision over a number of weeks,” Sam Altman, a Reddit board member, said in an interview. Pao, who will remain an adviser to the board through the end of the year, also called the decision mutual. We apologize : announcements. Theemuts comments on Reddit's new business strategy. Reddit in uproar after staff sacking. Social news site Reddit is in virtual lockdown in protest over the sacking of popular employee Victoria Taylor. 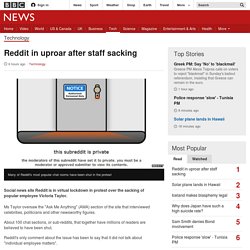 Ms Taylor oversaw the "Ask Me Anything" (AMA) section of the site that interviewed celebrities, politicians and other newsworthy figures. About 100 chat sections, or sub-reddits, that together have millions of readers are believed to have been shut. Reddit's only comment about the issue has been to say that it did not talk about "individual employee matters". The protests were led by the volunteer moderators of the AMA section, which said in an explanatory posting that they needed Ms Taylor's to keep the sub-reddit functioning. Ms Taylor helped organise guests for AMAs and worked to verify that people due to answer questions were who they said they were. There had been no explanation of why she was suddenly sacked, said the administrators. Aaron Swartz. Aaron Hillel Swartz (November 8, 1986 – January 11, 2013) was an American computer programmer, entrepreneur, writer, political organizer and Internet hacktivist who was involved in the development of the web feed format RSS[3] and the Markdown publishing format,[4] the organization Creative Commons,[5] the website framework web.py[6] and the social news site, Reddit, in which he became a partner after its merger with his company, Infogami. 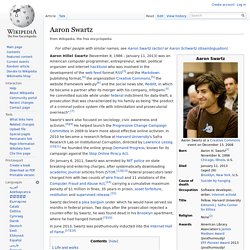 [i] He committed suicide while under federal indictment for data-theft, a prosecution that was characterized by his family as being "the product of a criminal-justice system rife with intimidation and prosecutorial overreach".[7] Swartz's work also focused on sociology, civic awareness and activism.[8][9] He helped launch the Progressive Change Campaign Committee in 2009 to learn more about effective online activism. Swartz declined a plea bargain under which he would have served six months in federal prison. Disappearance of Sunil Tripathi. Sunil Tripathi Sunil Tripathi was an American student who went missing on 16 March 2013. 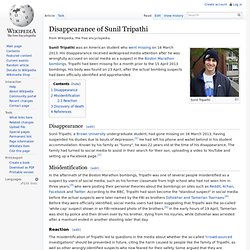 His disappearance received widespread media attention after he was wrongfully accused on social media as a suspect in the Boston Marathon bombings. Like clockwork: After the horrendous Santa Ana pot shop raid was deleted from /r/videos front page with over 4k votes, "Policeman saving a little girl's life" is posted today. : Bad_Cop_No_Donut. Reddit’s first transparency report : blog. What is a piece of Reddit history every Redditor should know? : AskReddit. Myusernameranoutofsp comments on Tech leaders give $5 million to build 100 new SF apartments to house homeless veterans. Ah, the old... Overview for AWildSketchAppeared. Unidan. "Biologist here!" CMV: Celebrity AMAs are ruined by Victoria from Reddit : changemyview. Backphlip comments on [Serious] What are the scariest things that have happened here on Reddit? [NSFW]

Science Shows How Reddit Users Are Like Sheep. ELI5: Whats the point of and www. if I can go to any website without typing it? : explainlikeimfive. Gamergate controversy. "GamerGate" redirects here. 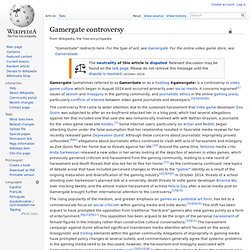 For the type of ant, see Gamergate. For the online video game store, see GamersGate. Gamergate (sometimes referred to as GamerGate or as a hashtag #gamergate) is a controversy in video game culture which began in August 2014 and occurred primarily over social media. It concerns ingrained[1] issues of sexism and misogyny in the gaming community, and journalistic ethics in the online gaming press, particularly conflicts of interest between video game journalists and developers.[2][3][4][5][6] Background As video game production developed into a burgeoning industry, games became an increasingly consumer-oriented product focused on appealing to gamers with satisfying solitary experiences. The growing popularity of games among casual consumers, due to more accessible technologies such as the Nintendo Wii and smartphones, expanded the audience for the industry to include many who did not fit the mold of the traditional hardcore gamer.

Announcing reddit notes : blog. Reddit mentioned in the Indian Parliament after MP does an AMA in /r/india. : bestof. Hello /r/India, I am Tathagata Satpathy. Member of Parliament, Chief Whip of BJD, Editor of Dharitri & Orissa POST. AMA! Nootropics and the Human Lab Rats of Reddit. [META] I have identified a list of domains that are banned from being posted to /r/news. Posting any link on any topic from one of these domains will result in that post not showing up in the feed. : undelete.

Well_golly comments on Bernie Sanders tries to meet with Black leaders but nobody shows up: Only 6 Congressional Black Caucus members attend. Mach-2 comments on This man really hit the nail on the head when it comes to the situation in Baltimore.