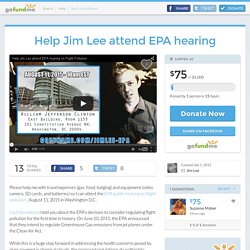 Last December, I told you about the EPA's decision to consider regulating flight pollution for the first time in history. On June 10, 2015, the EPA announced that they intend to regulate Greenhouse Gas emissions from jet planes under the Clean Air Act. While this is a huge step forward in addressing the health concerns posed by skies covered in chemical clouds, the proposed regulations do nothing to address three important areas: rogue geoengineering, bio-accumulation of cancer-causing fuel additives, and the potential environmental damage from the use of aviation biofuels to combat contrails.

I intend to present this evidence at that hearing and I encourage you to attend if you are able. Also see my research articles on this topic and my thorough flight pollution timeline . How a group of conspiracy theorists could derail the debate over climate policy. Two commercial airliners appear to fly close together as the pass over London on March 12, 2012 in London, England. 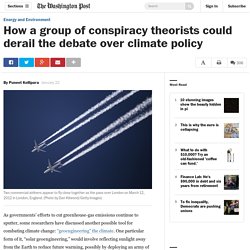 (Photo by Dan Kitwood/Getty Images) As governments’ efforts to cut greenhouse-gas emissions continue to sputter, some researchers have discussed another possible tool for combating climate change: “geoengineering” the climate. One particular form of it, “solar geoengineering,” would involve reflecting sunlight away from the Earth to reduce future warming, possibly by deploying an army of mirrors or spraying the air with reflective aerosols that would function like a chemical sunscreen. But as it turns out, some people believe that a global campaign is already underway to have aircraft spray the air with chemicals — whether to control climate change or for other, more sinister purposes. Solar geoengineering — more formally known as solar radiation management (SRM) — is merely an idea right now, and many scholars aren’t convinced that it’d actually be worth it. Jim Lee sur Twitter : "Re-branding #Geoengineering: #ClimateIntervention and Gatekeeping #HandsOffMySky.

Re-branding Geoengineering: Climate Intervention and Gatekeeping. The CIA asked me about controlling the climate – this is why we should worry. On January 19, 2011, I got a phone call from two men who told me they were consultants for the CIA. 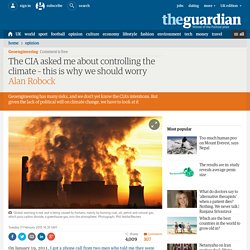 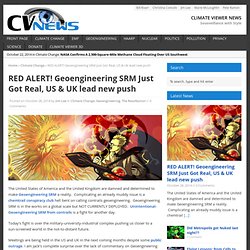 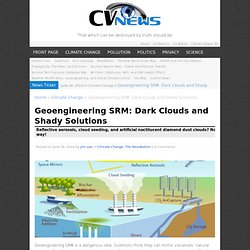 Scientists think they can mimic volcanoes’ natural process of cooling our planet by spraying sulfur into the sky using planes, drones, and floating hoses. You cannot solve pollution with more pollution, and Geoengineering SRM proponents cannot predict nor control the weather. After 60 years of cloud-seeding, the weather modification industry cannot accurately predict the outcomes of their “experiments” on a small scale so why would anyone believe it is possible to regulate global temperatures using weather manipulation techniques worldwide? Let us start with a video explaining exactly what SRM is: The Solar Radiation Management Governance Initiative from Environmental Defense Fund on Vimeo. These folks want to use Sulfur, Aluminum, and even Diamond Dust to save us from climate change. What are other scientists saying about this crazy idea? World Meteorological Organization position: Geoengineering Proposal Contest at Climate CoLab. 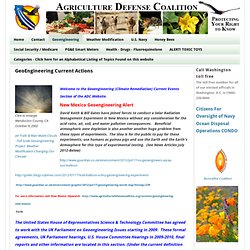 New Mexico Geoengineering Alert David Keith & Bill Gates have joined forces to conduct a Solar Radiation Management Experiment in New Mexico without any consideration for the acid rains, air, soil, and water pollution consequences. Beneficial atmospheric zone depletion is also another another huge problem from these types of experiments. The idea is for the public to pay for these experiments, use humans as guinea pigs and use the Earth and the Earth's Atmosphere for this type of experimental testing.

(See News Articles July 2012-Below) For more information visit New Mexico Skywatch: Forfo The United States House of Representatives Science & Technology Committee has agreed to work with the UK Parliament on Geoengineering Issues starting in 2009. Debates & conversations from around the web. Playing God With the Planet - The Ethics & Politics of Geoengineering. The World of Geoengineering. 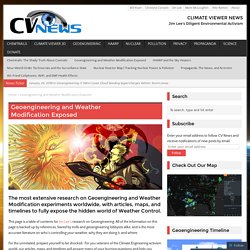 This page is a table of contents for Jim Lee’s research on Geoengineering. Climate Engineering Programs. “Everybody Talks About the Weather, But Nobody Does Anything About It.” 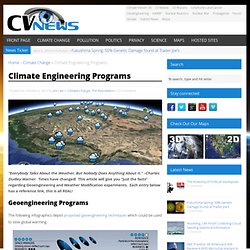 “Everybody Talks About the Weather, But Nobody Does Anything About It.” –Charles Dudley Warner. Times have changed! Geoengineering and Weather Modification Patents. This listing of geoengineering and weather modification patents is far from complete and will be updated occasionally. 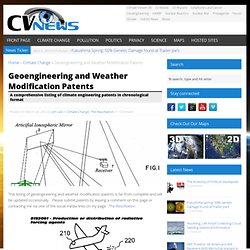 The History of Cloud Seeding: From Pluviculture to Hurricane Hacking. Cloud seeding is the most common form of weather modification currently employed globally. 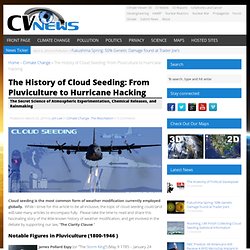 While I strive for this article to be all-inclusive, the topic of cloud seeding could (and will) take many articles to encompass fully. Please take the time to read and share this fascinating story of the little-known history of weather modification, and get involved in the debate by supporting our law, “The Clarity Clause.” Notable Figures in Pluviculture (1800-1946 ) James Pollard Espy (or ”The Storm King“) (May 9 1785 – January 24 1860) was a U.S. meteorologist who proposed burning forests to increase rainfall. Hurricane Hacking: The Department of Homeland Security enters the weather modification business. I now present the DHS workshop report (videos and a few images added by Jim Lee): The potential loss of life, physical devastation, economic impact and loss of public confidence posed by a major hurricane could be as detrimental to the United States as any terrorist attack. These threats are significant and the magnitude of the impacts are increasing as a result of continued population shifts to coastal areas and potentially from the resultant changes to the environment.

Cloud Ionization, Electric Rainmaking, and Laser-guided Weather Modification. The Blue Gold Rush and Water Wars: Using the Rivers of the Troposphere. By David Kutchinski, CEO Sciblue, Inc.La Junta, Colorado, United States of America Abstract Fresh water has been dubbed “Blue Gold” in many publications as potable water will be to this century what oil was to the last century. Less than three percent of the water on the earth’s surface is fresh water. When we deduct the amount in the ice at each pole and the rivers flowing in uninhabited areas that number is less than one percent. From this amount the nearly 7 billion people on earth use to survive. [su_youtube_advanced url=" controls="alt" autohide="yes" showinfo="no" rel="no" theme="light"] Can Doctor Evil Save the World? A Geoengineering Tale. By JEFF GOODELL | POSTED NOV 03, 2006 9:40 AM | Rolling Stone Last summer, an elite group of scientists, economists and government officials gathered at Snowmass ski resort near Aspen, Colorado, to contemplate the end of the world.

The weeklong “workshop, held in the shadow of 14,000-foot-high peaks at the Top of the Village lodge, was organised by the Energy Modeling Forum, a group of academics and industry leaders affiliated with Stanford University. A few months earlier, Stanford professor John Weyant, the director of the group, had asked participants to consider a nightmare scenario: It’s 2010, and global warming is not only happening, it’s accelerating. The Greenland and western Antarctic ice sheets are melting at an exponential rate, leading to predictions of a twenty-foot rise in sea levels by 2070. A Hard Look at the Perils and Potential of Geoengineering. By jeff goodell. Terraforming Earth: Geoengineering megaplan starts now. Published 09 October 2013 by Michael Marshall. Public refuses geoengineering SRM proposals scientists actually listen. Atmospheric Armageddon - ANGELS, HAARP, Methane, and Lucy in the Sky with Diamonds. US military discusses future of Weather Warfare despite ENMOD ban.