Past simple – regular verbs. The past simple is the most common way of talking about past events or states which have finished. 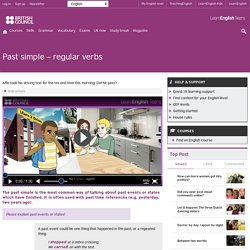 It is often used with past time references (e.g. yesterday, two years ago). Please explain past events or states! A past event could be one thing that happened in the past, or a repeated thing. I stopped at a zebra crossing. We carried on with the test. A state is a situation without an action happening. We stayed at my grandparents' house last summer. How do you form the past simple? Regular past simple forms are formed by adding -ed to the infinitive of the verb. start → startedkill → killedjump → jumped Yes, but there are some spelling rules. 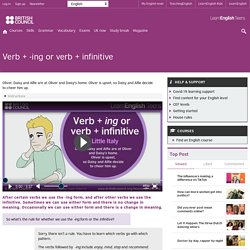 Sometimes we can use either form and there is no change in meaning. Occasionally we can use either form and there is a change in meaning. So what’s the rule for whether we use the -ing form or the infinitive? Sorry, there isn’t a rule. You have to learn which verbs go with which pattern. The verbs followed by -ing include enjoy, mind, stop and recommend. I told him you really enjoy cooking. The negative is verb + not + -ing. Imagine not having pizza! Verbs usually followed by -ing stop finish imagine suggest recommend avoid mind miss risk enjoy I thought you could say: 'I recommend that you see that film'? Yes, you’re right, you can. OK, what about the verbs followed by the infinitive? These include decide, want, promise, plan and forget. She decided to go with Elliot instead. The negative is verb + not + infinitive. They decided not to make pizza. Here are more verbs that are usually followed by the infinitive: Technology Then and Now. UNIT 3 BIOGRAPHY SB STR, 37Robert Irwin's virtual Australia Zoo tour!

Irregular verbs 1. Irregular Verb Memory Match - Match The Memory. Unit 3,4 Irregular Verbs ESL Game for Kids. UNIT 3 SB STR. 34 Be a Professional Dog Walker: Step-by-Step Career Guide. UNIT 3 ANIMAL TEENAGERS SB STR. 33 Stages of life. Animal Names: Types Of Animals With List & Pictures. ANIMALS! List of animal names with animal pictures in English. Learn these types of animals to increase your vocabulary about animals in English and thus enhance your English in general. When learning English, you are likely to come across a lot of animals, each of these has its own name. There is a range of animal types and it is often easier to learn the names of these animals by type, for example, mammals, reptiles, birds, and insects.

You may also like to learn animal names by location such as farm animals, jungle creatures and pets. English animal names are very easy to remember. Animal Names Everybody loves animals, keeping them as pets, seeing them at the zoo or visiting a farm… Learn animal names with different types of animals and useful list of animals with pictures. Types of Animals Animals can be classified by different basic categories as follows: PetsFarm & Domestic AnimalsWild AnimalsMammalsSea AnimalsBirdsInsects. Discover the New Forest National Park. We Went Camping - Irregular Verbs. English adjectives with endings -ed and -ing exercise. Check the answers to this exercise » Choose the right adjectives with endings -ed or -ing to complete the following sentences in English. 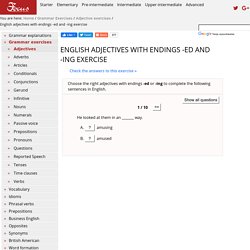