Britecharts - D3.js based charting library of reusable components. Britecharts is a client-side reusable Charting Library based on D3.js v4 that allows easy and intuitive use of charts and components that can be composed together creating amazing visualizations. 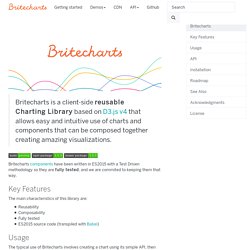 Britecharts components have been written in ES2015 with a Test Driven methodology so they are fully tested, and we are commited to keeping them that way. Key Features The main characteristics of this library are: ReusabilityComposabilityFully testedES2015 source code (transpiled with Babel) Usage The typical use of Britecharts involves creating a chart using its simple API, then rendering it on a container which has previously had data applied to it. BarChart .width(500) .height(300); barContainer.datum(dataset).call(barChart); All the components expose some basic API methods like width, height and margin. Installation. Open source dashboard tools for visualizing data. Transform Data by Example - Microsoft Research. Troubleshooting Problems Q1. 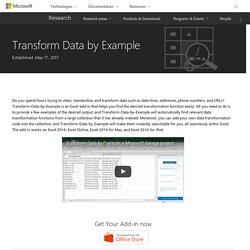 ERROR message: “Please select an empty cell inside the data range of the column that you are trying to fill.” This warning message is triggered in two cases: No valid data region was detected for transformations to be performed. There are two ways to select data region in Transform Data by Example: (1) The user can select any empty cell in the column for which output needs to be produced, in such a case a contiguous non-empty region to the left is automatically inferred as the data region (see the first figure below), or (2) The user explicitly selects a region where the last column is used as the output column, in which values are only partially filled (see the second figure below). Q2. Documentation — VisPy. VisPy is a high-performance interactive 2D/3D data visualization library leveraging the computational power of modern Graphics Processing Units (GPUs) through the OpenGL library to display very large datasets. 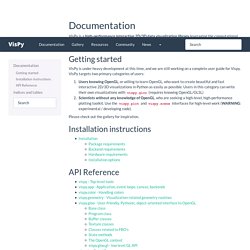 VisPy is under heavy development at this time, and we are still working on a complete user guide for Vispy. VisPy targets two primary categories of users: Users knowing OpenGL, or willing to learn OpenGL, who want to create beautiful and fast interactive 2D/3D visualizations in Python as easily as possible. 10 Minutes to pandas — pandas 0.20.1 documentation. This is a short introduction to pandas, geared mainly for new users. 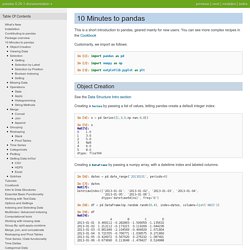 You can see more complex recipes in the Cookbook Customarily, we import as follows: Vue.js. Beautiful Soup Documentation — Beautiful Soup 4.4.0 documentation. Teaching Python and more with open educational resources. If you're looking to teach, tutor, or mentor beginning programmers, you've got your work cut out for you. 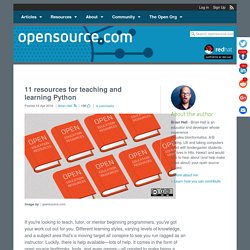 Different learning styles, varying levels of knowledge, and a subject area that's a moving target all conspire to see you run ragged as an instructor. Luckily, there is help available—lots of help. It comes in the form of open source textbooks, tools, and even games—all created to make being a teacher (and a learner) easier than ever before. A bit of context: I completed a master's degree in information and computer science last summer and started teaching my first university class (Python programming) about two weeks later. Open source alternatives to Google Calendar. For many of us, our calendar is our lifeblood. 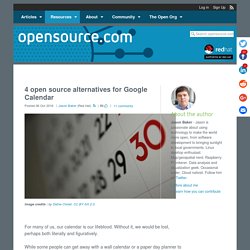 Without it, we would be lost, perhaps both literally and figuratively. While some people can get away with a wall calendar or a paper day planner to organize their schedule, a whole lot of us have turned over the process of managing time allotments to a digital calendar. In truth, most of us are juggling quite a few calendars from both our work and personal lives, and often a few other organizations that we're involved with, including anything from non-profits to tech meetups to social clubs.

Most of the major vendor ecosystems provide some sort of calendaring solution which can sync across devices. Among them, Google Calendar is perhaps the most prevalent. As with countless other tools, though, you don't have to use a proprietary hosted solution for your calendar needs. Qt Creator 4.3.0 released - Qt Blog. We are happy to announce the release of Qt Creator 4.3.0! 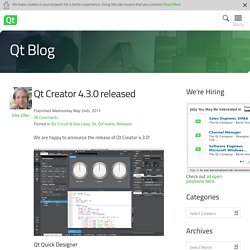 Qt Quick Designer For Qt Creator 4.3 we integrated a code editor into Qt Quick Designer. This allows you to use the Properties editor and the Navigator also while editing code. Additionally, you can split the view to show both the graphical and the code editor, and directly see how a change in the graphical editor affects the code, and vice versa. Of course, you can still use the code-only editor in the Edit mode as well. There have been many more improvements and additions to Qt Quick Designer, like better support of stacked containers and a new tool bar for common actions. GitHub - spiral/guide: Spiral Framework Guide. Data-processing for humans. PHP NBA API and MLB Stats: Retrieve statistics from NBA and MLB API - PHP Classes.