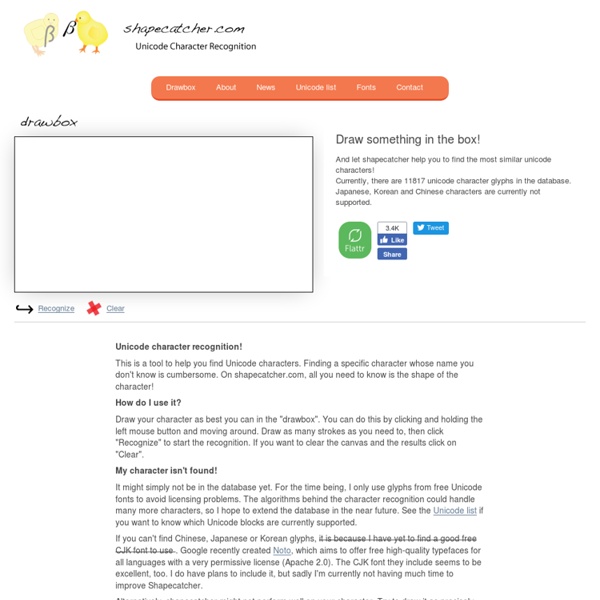 Unicode character recognition! This is a tool to help you find Unicode characters. Finding a specific character whose name you don't know is cumbersome. On shapecatcher.com, all you need to know is the shape of the character! How do I use it? Draw your character as best you can in the "drawbox".

Qt Creator 4.3.0 released - Qt Blog We are happy to announce the release of Qt Creator 4.3.0! Qt Quick Designer For Qt Creator 4.3 we integrated a code editor into Qt Quick Designer. This allows you to use the Properties editor and the Navigator also while editing code. Additionally, you can split the view to show both the graphical and the code editor, and directly see how a change in the graphical editor affects the code, and vice versa. Of course, you can still use the code-only editor in the Edit mode as well.

Coordinates in Hexagon-Based Tile Maps Introduction Tile Maps are often used for the graphics in two-dimensional games. Using tiles means that all graphics are combinations of smaller graphics, similar to mosaics. The advantage is a smaller need for memory. The tilesets are seldom bigger than a few hundred kilobytes and a map needs far less memory than a pre-rendered image; it needs only a pointer per field that identifies which tile is used. stAllio!'s way: databending and glitch art primer, part 1: the wordpad effect welcome to my databending and glitch art primer! in part 1, we're going to talk about one of my favorite glitch art effects—the wordpad effect. i'm starting off with this effect because it's so easy that any windows user should be able to do it (note: i haven't tried it in vista), but it's complex enough under-the-hood that it allows me to discuss several important principles of glitch art. but first, let's define a few terms. databending is, in essence, the artistic misuse of digital information. the term is inspired by the similar art of circuit bending ; you could say that databending is like circuit bending with no circuits. the term is used most frequently in the context of electronic music (primarily glitch music ).

About You know what some character looks like, but you've forgotten its name or its Unicode code point. Now what do you do? Shapecatcher is a new website, that helps you to find specific Unicode characters, just by sketching their shape. Currently about 10000 of the most important Unicode characters are compared to your sketch and are analysed for similarities. Under the hood, Shapecatcher uses so called "shape contexts" to find similarities between two shapes. Shape contexts, a robust mathematical way of describing the concept of similarity between shapes, is a feature descriptor first proposed by Serge Belongie and Jitendra Malik.

Open source alternatives to Google Calendar For many of us, our calendar is our lifeblood. Without it, we would be lost, perhaps both literally and figuratively. While some people can get away with a wall calendar or a paper day planner to organize their schedule, a whole lot of us have turned over the process of managing time allotments to a digital calendar. In truth, most of us are juggling quite a few calendars from both our work and personal lives, and often a few other organizations that we're involved with, including anything from non-profits to tech meetups to social clubs. Most of the major vendor ecosystems provide some sort of calendaring solution which can sync across devices.

Amit’s Game Programming Information What’s on this page? I’m interested in producing complexity out of simple parts. This page contains bookmarks that I collected while working on games; I did not write most of the content linked from here. As a result the set of links here reflects the types of things I needed to know: only a few specific topics (not everything related to game programming), general ideas instead of platform-specific information (graphics, sound, compilers), and ideas and designs instead of source code (I find it easier to go from an idea to code than from code to an idea). Other sites, like Gamedev Tuts+, Gamedev, and Gamasutra, cover lots more topics than mine does. Shortest Paths

What’s the most readable font for the screen? If there’s a topic that’s bound to get designers riled up into a fiery debate, it’s the issue of choosing the most readable fonts for use on the screen. For most of the web’s life, designers haven’t had much flexibility when it comes to setting the type for their sites, and type decisions have almost always come down to choosing one or two web-safe fonts (a small collection of fonts that are installed on most users’ machines) and setting the font sizes. CSS’s @font-face has garnered significant attention in the past year as browsers expanded their support for it and major type foundries began developing web licenses, making services such as Typekit possible. What many people don’t realize is that @font-face isn’t new–in fact, Internet Explorer 6, every web designer’s headache, supported it before just about everyone else. There were many problems with Microsoft’s implementation. Serif or Sans-Serif?

en:users:manual:0.4.3b:index [Pencil Wiki ] by P. Naidon - July 21st 2007 (to be completed) Overview Teaching Python and more with open educational resources If you're looking to teach, tutor, or mentor beginning programmers, you've got your work cut out for you. Different learning styles, varying levels of knowledge, and a subject area that's a moving target all conspire to see you run ragged as an instructor. Luckily, there is help available—lots of help. It comes in the form of open source textbooks, tools, and even games—all created to make being a teacher (and a learner) easier than ever before.