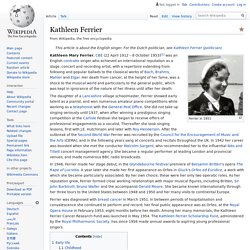 Her death from cancer, at the height of her fame, was a shock to the musical world and particularly to the general public, which was kept in ignorance of the nature of her illness until after her death. In 1946, Ferrier made her stage debut, in the Glyndebourne Festival premiere of Benjamin Britten's opera The Rape of Lucretia. A year later she made her first appearance as Orfeo in Gluck's Orfeo ed Euridice, a work with which she became particularly associated. By her own choice, these were her only two operatic roles. 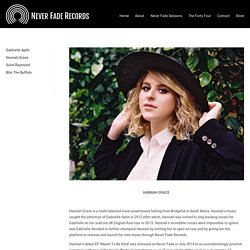 Hannah’s music caught the attention of Gabrielle Aplin in 2012 after which, Hannah was invited to sing backing vocals for Gabrielle on her sold out UK English Rain tour in 2013. Hannah’s incredible vocals were impossible to ignore and Gabrielle decided to further champion Hannah by inviting her to open on tour and by giving her the platform to release and launch her own music through Never Fade Records. Hannah’s debut EP ‘Meant To Be Kind’ was released on Never Fade in July 2014 to an overwhelmingly positive response, with one of the tracks ‘Broke’ being chosen as an iTunes single of the week in a staggering 12 countries. Following support slots with artists like Hozier, Lissie and Gabrielle. Hannah’s eagerly anticipated second EP ‘Mustang’ was released in July 2016. 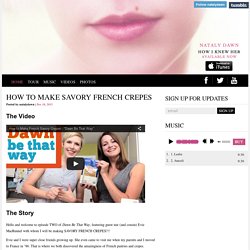 Evie and I were super close friends growing up. She even came to visit me when my parents and I moved to France in ‘96. That is where we both discovered the amazingness of French pastries and crepes. They’re fun to make, and for practical reasons better than pancakes, because you can do them in advance and they don’t lose any of their pizzaz. So here’s how you make them and a list of ingredients taken from The Pancake Handbook. The Swingles. The Joni Mitchell Interview. BBC Hardtalk Brian Eno. Bad Bad Hats - Official Site. Lily & Madeleine. Www.junmiyake.com - JUN MIYAKE / 三宅 純 official site. Max Ochs. Now based in Severna Park, Maryland, Ochs continues to perform, write and record songs in an early folk and blues tradition. 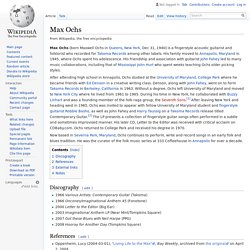 He was the curator of the folk music series at 333 Coffeehouse in Annapolis for over a decade. Discography[edit] The DROiDS. Homeworld: Deserts of Kharak Soundtrack (Full) Music, performance and robotics. Colorado Songwriter & Ukulele Player. Delia Derbyshire (delia-derbyshire.org) Delia Derbyshire Audiological Chronology.

J.S. Bachstiftung. Frank's World. Green Gartside: The brainiest man in pop (apart from Brian Eno) Any touring band is used to fans who turn up backstage with old singles, photographs and bits of ephemera to be signed. 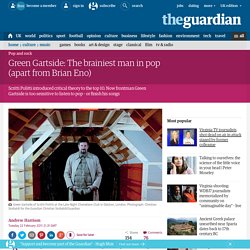 Eels: Official Band Website. The Duckworth Lewis Method. On paper, a band and album created around the concept of cricket has the sound of something rather niche, hardly universal, and perhaps a little tongue-in-cheek. 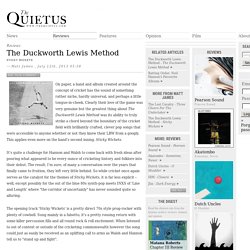 Clearly their love of the game was very genuine but the greatest thing about The Duckworth Lewis Method was its ability to truly strike a chord beyond the boundary of the cricket field with brilliantly crafted, clever pop songs that were accessible to anyone whether or not they knew their LBW from a googly. This applies even more on the band's second inning, Sticky Wickets. It's quite a challenge for Hannon and Walsh to come back with fresh ideas after pouring what appeared to be every ounce of cricketing history and folklore into their debut. 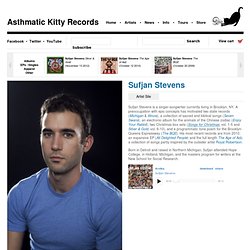 A preoccupation with epic concepts has motivated two state records (Michigan & Illinois), a collection of sacred and biblical songs (Seven Swans), an electronic album for the animals of the Chinese zodiac (Enjoy Your Rabbit), two Christmas box sets (Songs for Christmas, vol. 1-5 and Silver & Gold, vol. 6-10), and a programmatic tone poem for the Brooklyn-Queens Expressway (The BQE). His most recent records are from 2010: an expansive EP (All Delighted People) and the full length The Age of Adz, a collection of songs partly inspired by the outsider artist Royal Robertson. Born in Detroit and raised in Northern Michigan, Sufjan attended Hope College, in Holland, Michigan, and the masters program for writers at the New School for Social Research.