ESL Worksheets - Free grammar worksheets, free vocabulary worksheets and free supplemental exercises for teaching ESL. Free Printables for Teachers - flashcards, printable games, worksheets, phonics materials, conversational activities. How to Tell if Your Student Could Benefit From Speech Therapy. Posted 07/09/2015 9:28AM | Last Commented 08/05/2015 6:57AM Speech is an integral part of being human, and while it comes naturally and easily to the majority of the population, language is not so effortless for some. 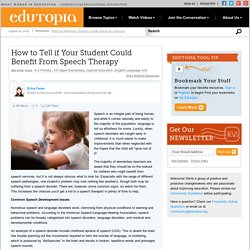 Luckily, when speech disorders are caught early in childhood, it is much easier to make improvements than when neglected with the hopes that the child will "grow out of it". The majority of elementary teachers are aware that they should be on the lookout for children who might benefit from speech services, but it is not always obvious what to look for. Especially with the range of different speech pathologies, one student’s problem may look nothing like another’s, though both may be suffering from a speech disorder. There are, however, some common signs, so watch for them. Common Speech Development Issues Numerous speech and language disorders exist, stemming from physical conditions to learning and behavioral problems.

Language disorders affect children differently. 20 words that once meant something very different. Words change meaning over time in ways that might surprise you. 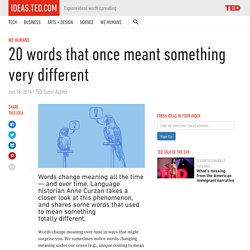 We sometimes notice words changing meaning under our noses (e.g., unique coming to mean “very unusual” rather than “one of a kind”) — and it can be disconcerting. How in the world are we all going to communicate effectively if we allow words to shift in meaning like that? The good news: History tells us that we’ll be fine. Words have been changing meaning — sometimes radically — as long as there have been words and speakers to speak them. Here is just a small sampling of words you may not have realized didn’t always mean what they mean today. Nice: This word used to mean “silly, foolish, simple.” Celebrate National Poetry Month with Stenhouse. March 31st, 2015 On this last day of March, we are excited to look forward to April and National Poetry Month. 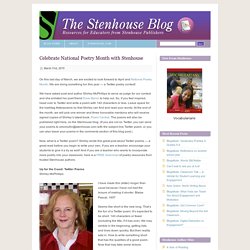 We are doing something fun this year — a Twitter poetry contest! We have asked poet and author Shirley McPhillips to serve as judge for our contest and she enlisted her poet friend Drew Myron to help out. So, if you feel inspired, head over to Twitter and write a poem with 140 characters or less. Leave space for the hashtag #stenpoems so that Shirley can find and read your words. 12 Lonely Negative Words. Are you disgusted, disgruntled and disheveled? Well, unfortunately you’re never going to be gusted, gruntled or sheveled. Disgusted, disgruntled and disheveled are what you might call “lonely negatives.” They’re negative words whose positive partners have vanished or never existed in the first place. National Science Foundation (NSF) Discoveries - Mental word practice. DiscoveryMental word practice Simply listening prompts speech practice before an infant's first words July 8, 2015 The following is part two in a series of articles titled "Amazing Discoveries About How Infants Learn," describing how infants acquire knowledge and what influences their social and thinking skills as they mature. 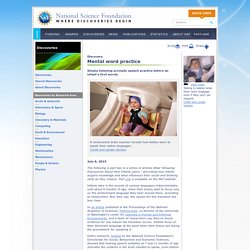 Part one is available on the NSF website. Infants take in the sounds of various languages indiscriminately until about 8 months of age, when their brains start to focus only on the predominant language they hear around them, according to researchers. In an article published in the Proceedings of the National Academy of Sciences, Patricia Kuhl, co-director of the University of Washington's center for Learning in Formal and Informal Environments, and a team of researchers say they've found evidence for one reason the transition occurs. To study the infants' brain activity, Kuhl used a noninvasive scanning technique called magnetoencephalography. How to use a semicolon - Emma Bryce. What’s so special about the semicolon? 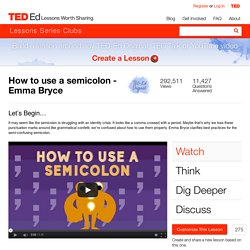 This source will give you an overview of this valuable punctuation mark and how to use it. Grammar Girl’s guide is useful too; it explains the difference between a colon and a semicolon, when it’s appropriate to use a comma and when you should use a semicolon instead. Here are tips on how to use semicolons in lists. Ohio appeals court ruling is a victory for punctuation, sanity - The Washingt... Look, I know you’re all busy, but let’s just take a minute today and celebrate Judge Robert A. 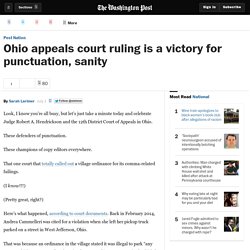 Hendrickson and the 12th District Court of Appeals in Ohio. These defenders of punctuation. These champions of copy editors everywhere. That one court that totally called out a village ordinance for its comma-related failings. (I know!!!) (Pretty great, right?) Here’s what happened, according to court documents. That was because an ordinance in the village stated it was illegal to park “any motor vehicle camper, trailer, farm implement and/or non-motorized vehicle” on a street for more than 24 hours.