Concerns about Declines in Bird Populations

No, Climate Change Is Not ‘Pushing Birds North’ By Paul Homewood James Taylor debunks the latest rubbish from the Guardian: Among the top Google News search results today under “climate change, the UK Guardian and other media outlets are claiming a new atlas of bird habitats shows global warming is “pushing” birds further north. 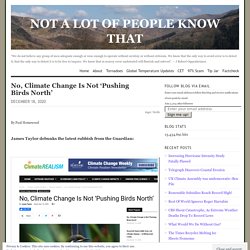 The atlas itself, however, tells a completely different story. Rather than “pushing” birds out of their normal ranges and forcing them north, birds are benefiting from a warming climate by expanding their overall ranges, thriving in new, northern regions while still thriving in southern regions as well. Climate Tits! By Paul Homewood h/t Ian Magness This appeared in the Telegraph the other day. 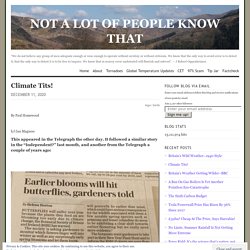 It followed a similar story in the “Independent?” Last month, and another from the Telegraph a couple of years ago: A rapidly warming climate will spell disaster for swathes of life on earth, including many bird species. A new study reveals some birds which are dependent on specific abundant food sources at certain times of year may not be able to adapt fast enough to the change to seasonal patterns the climate crisis is bringing. The research, by scientists at the Norwegian University of Science and Technology and Oxford University, focused on great tits’ dietary habits. They found that warmer winters and subsequent early springs cause trees to leaf earlier, which in turn prompts the larvae that feed on the plants to hatch earlier, and this can present a problem to the birds. Climate Claims about Birds. Windfarm--Bird Deaths. Solar Power Plants and Bird Deaths. The impact of commercial fisheries on seabird populations in the North Sea.

Albatross Dying Out Because Of Climate Change–Latest Attenborough Fake News. By Paul Homewood h/t Robin Guenier/Me Grim Nasty It looks like David Attenborough has been making it up as he goes along again: On Sunday evening, the legendary BBC presenter took viewers to the southernmost continent for the first episode of “Seven Wolds, One Planet.” 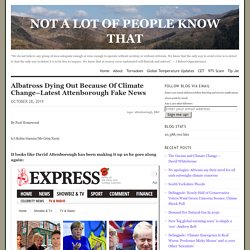 Now 93, Sir David emphasised the shocking effects human beings are having on this untouched frozen desert by contributing to global warming. He revealed how the population of albatross – large seabirds that live in cold conditions – has more than halved in 15 years. This is due to the warming of the Southern Ocean, which is causing more severe weather patterns than ever seen before and the young birds simply cannot deal with it. More Junk Science From the AAAS of A: Bird Apocalypse Edition. Guest Science! 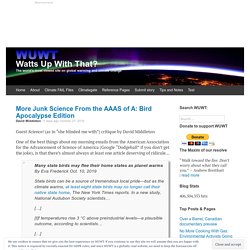 South Florida wading birds nested like crazy in 2018, a great sign for the Everglades. Reader Mumbles McGuirck makes a cogent observation: “Hmmm … Why don’t they blame it on climate change?” 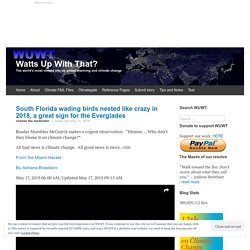 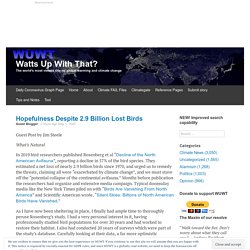 They estimated a net loss of nearly 2.9 billion birds since 1970, and urged us to remedy the threats, claiming all were “exacerbated by climate change”, and we must stave off the “potential collapse of the continental avifauna.” Months before publication the researchers had organize and extensive media campaign. Typical doomsday media like the New York Times piled on with “Birds Are Vanishing From North America” and Scientific American wrote, “Silent Skies: Billions of North American Birds Have Vanished.”

As I have now been sheltering in place, I finally had ample time to thoroughly peruse Rosenberg’s study. Three introduced species – house sparrows, starlings and pigeons – account for nearly one half billion lost birds. Insect outbreaks also create forest openings. Endangered Shorebirds? Blame Climate Change! Despite Climate Claims, These Birds Are Not Declining. Guest Essay by Kip Hansen There have been many claims from environmentalist and nature groups that modern civilization, climate change, pollution, wind farms and pesticide use have been driving bird populations down all across North and Central America. 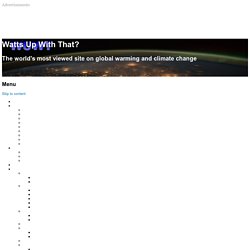 I see these claims in my email inbox because I am a big fan of birds — almost a bird groupie — and my email address appears on the mailing lists of birding organizations like Audubon and the Cornell Lab of Ornithology. I love to watch and listen to birds of all kinds and have nearly missed crashing my cars more times that I wish to admit due to seeing some interesting avian event. Several years ago while doing humanitarian work in Puerto Rico, I swerved off the road (intentionally this time) to spend an hour watching a male pin-tailed whydah (Vidua macroura), with its outsized tail feathers, attempting to get into flight from the ground. Declining Bird Populations; Another False Global Warming Alarmism. Opinion; Dr. 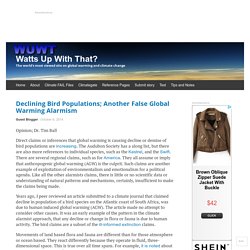 Tim Ball Direct claims or inferences that global warming is causing decline or demise of bird populations are increasing. The Audubon Society has a along list, but there are also more references to individual species, such as the Kestrel, and the Swift. There are several regional claims, such as for America. They all assume or imply that anthropogenic global warming (AGW) is the culprit. Years ago, I peer reviewed an article submitted to a climate journal that claimed decline in population of a bird species on the Atlantic coast of South Africa, was due to human induced global warming (AGW). Movements of land based flora and fauna are different than for those atmosphere or ocean based. Industrial Fishing Of Sandeels Is To Blame For Seabird Declines, Not Climate Change. By Paul Homewood Back to that RSPB report: According to Yahoo: The report went on: “The UK’s kittiwake population has declined by 70% since 1986 because of falling breeding success and adult survival. 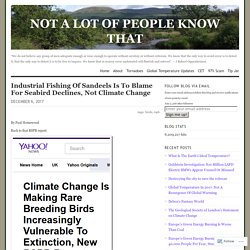 “Climate change has reduced the availability of the sandeels they rely upon in the breeding season. Puffins Thriving–Despite Climate Change! The Problem with Puffins. Guest Essay by Kip Hansen Catastrophe looms for the problematic puffin. 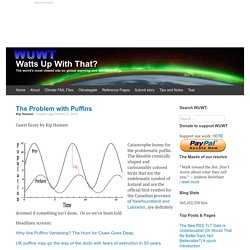 The first study reminds me of Mark Twain’s quip, “Education consists mainly in what we have unlearned.” Embodying that truism is a paper by lead author Dr. Michelle LaRue who reports new advances in reading the Emperor Penguin’s fecal stains on Antarctic sea ice that are visible in satellite pictures. LaRue’s new study advances the science by analyzing the shifting patterns of penguin poop, and her results are prompting some scientists to “unlearn” a key belief that has supported speculation of the Emperors imminent extinction. Below is the graph featured by penguin expert Dr.