“Science Made Stupid” – Carbon Dioxide & Bird Nest Edition. Guest “just when you thought climate ‘science’ couldn’t get any dumber” by David Middleton AUGUST 5, 2020Bird nests attract flying insects and parasites due to higher levels of carbon dioxideby FrontiersFlying insects and parasites are often vectors for disease, but a mosquito needs to first find someone before they can bite them.

In a recent study published in Frontiers in Ecology and Evolution, researchers examined bird nests in order to understand how insects and parasites detect gases such as carbon dioxide and methane as a way to locate their hosts.The researchers focused on blue tit bird nest boxes located in a deciduous forest in central Spain.

They found that the nests contained more biting midges when concentrations of carbon dioxide were higher inside the nest compared to the forest air. […]With the looming threat of climate change, rising carbon levels will affect every aspect of our ecosystem—from the largest to the smallest organism. First, the easiest bit: Study Shows Climate Change Expands North American Bird Ranges – Media Sounds Alarm. By Paul Homewood Over to you, RSPB! 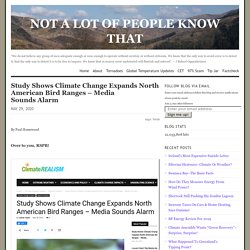 A newly published study shows North American birds are taking advantage of global warming to expand their ranges northward, without any shrinkage in the southern edge of their North American ranges. Rather than celebrate this good news for birds, climate alarmists and their media puppets are crying “Crisis!” Nightingales at risk due to shorter wings caused by climate crisis. By Paul Homewood No, it was not an April Fools story after all! 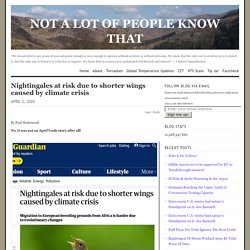 The nightingale was feted by John Keats as a “light-winged Dryad of the trees”. But the much-celebrated small bird with a beautiful song may be increasingly endangered because its wings are getting shorter. The nightingale makes an epic journey from sub-Saharan Africa to breed in Europe each summer but there are barely 7,000 nesting pairs left in England. Shrinking Birds: Everything Looks Like A Nail. “To a man with a hammer, everything looks like a nail.”– Mark Twain. 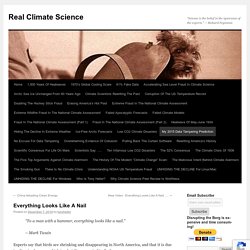 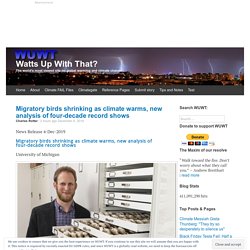 Study: Climate change is leading to unpredictable ecosystem disruption for migratory birds. Public Release: 5-Mar-2019 Ithaca, NY–Using data on 77 North American migratory bird species from the eBird citizen-science program, scientists at the Cornell Lab of Ornithology say that, in as little as four decades, it may be very difficult to predict how climate change will affect migratory bird populations and the ecosystems they inhabit. 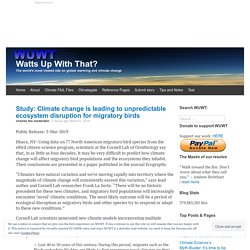 Their conclusions are presented in a paper published in the journal Ecography. “Climates have natural variation and we’re moving rapidly into territory where the magnitude of climate change will consistently exceed this variation,” says lead author and Cornell Lab researcher Frank La Sorte. “There will be no historic precedent for these new climates, and migratory bird populations will increasingly encounter ‘novel’ climatic conditions. Claim: Baby Birds Can't Cope with Climate Change. All the baby birds will starve unless we change our wicked ways. 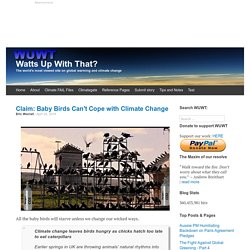 Climate change leaves birds hungry as chicks hatch too late to eat caterpillarsEarlier springs in UK are throwing animals’ natural rhythms into disarray, resulting in population declinesJosh Gabbatiss Science CorrespondentMonday 23 April 2018 16:15 BSTWarmer springs due to climate change are leaving chicks in UK woodlands hungry, according to new research. …“Previous work has shown a mismatch does lead to population declines,” Dr Karl Evans, one of the study’s authors at the University of Sheffield, told The Independent.Dr Malcolm Burgess, a bird researcher at the University of Exeter and the RSPB who led the research, added: “Forests have a short peak in caterpillar abundance, and some forest birds time their breeding so this coincides with the time when their chicks are hungry. 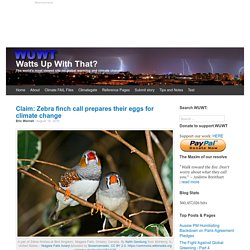 By Keith Gerstung from McHenry, IL, United States – Niagara Falls AviaryUploaded by Snowmanradio, CC BY 2.0, Guest essay by Eric Worrall According to the AAAS, Zebra Finches are helping their hatchlings respond to global warming, by singing to their eggs. Video: Zebra finch call prepares their eggs for climate changeScientists have long worried whether animals can respond to the planet’s changing climate.

Now, a new study reports that at least one species of songbird—and likely many more—already knows how to prep its chicks for a warming world. Read more: The following is the study referenced by the press release; Prenatal acoustic communication programs offspring for high posthatching temperatures in a songbirdIn many species, embryos can perceive and learn external sounds. Tropical Birds will Fail to Adapt to Global Warming. Guest essay by Eric Worrall Birds were amongst the most successful survivors of the Cretaceous-Paleogene extinction event which wiped out the dinosaurs, but researchers claim they won’t be able to cope with the ferocious 1-2C / century pace of the current warming period. 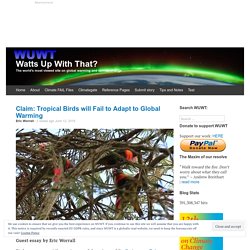 Past climate change pushed birds from the northern hemisphere to the tropicsby University of CambridgeJUNE 10, 2019…The researchers, from the Universities of Cambridge and Oxford, applied climate and ecological modelling to illustrate how the distribution of major bird groups is linked to climate change over millions of years. However, while past climate change often occurred slowly enough to allow species to adapt or shift habitats, current rates of climate change may be too fast for many species, putting them at risk of extinction. The results are reported in Proceedings of the National Academy of Sciences. The abstract of the study; Unfortunately the full study is paywalled, but I think we get the idea.