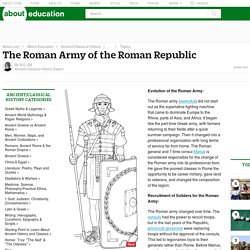 The consuls had the power to recruit troops, but in the last years of the Republic, provincial governors were replacing troops without the approval of the consuls. This led to legionaries loyal to their generals rather than Rome. Before Marius, recruitment was limited to citizens enrolled in the top 5 Roman classes. Size of the Roman Legions Legion Under Augustus: Contubernium of Soldiers in the Roman Army: There was one leather sleeping tent to cover a group of 8 legionaries. "The Size and Organization of the Roman Imperial Legion," by Jonathan Roth; Historia: Zeitschrift für Alte Geschichte, Vol. 43, No. 3 (3rd Qtr., 1994), pp. 346-362 Legion Names: Legions were numbered. Roman Army Punishments: One way to ensure discipline was the system of punishments. Siege Warfare: The first great siege war was waged by Camillus against the Veii.

Auxiliary. Dux Bellorum. Imperator. Legions. Choose a name and number for your Legion (consult history books if authenticity is a concern). 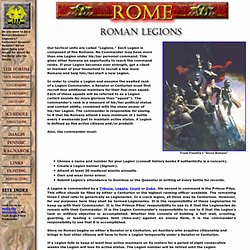 Create a Legion banner (Signum). Attend at least 20 medieval events annually. Own and wear torso armor. Submit Legion’s attendance to Dominus or the Quaestor in writing at every battle for records. A Legion is commanded by a Tribune, Legate, Count or Duke. Roman Centurion. You are not merely a competent soldier; you are an absolute bad-ass. 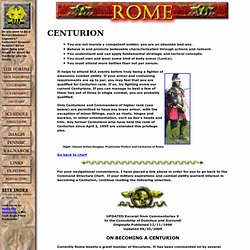 Behave in and promote believable characterization through actions and raiment. You understand and can apply fundamental strategic and tactical concepts. You must own and wear some kind of body armor (Lorica). You must attend more battles than not per annum. Go back to chart For your navigational convenience, I have placed a link above in order for you to go back to the Command Structure Chart. Go back to chart. Roman Decurion. Roman Legate. Roman Legionary. Roman Military Tribune. A Tribune is a Legion commander who is either of Centurion rank or Senatorial status. 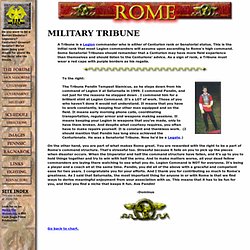 This is the initial rank that most Legion commanders will assume upon ascending to Rome's high command. Some Senatorial Tribunes should remember that a Centurion may have more field experience than themselves and should listen to the Centurions' advice. As a sign of rank, a Tribune must wear a red cape with purple borders as his regalia. On the other hand, you are part of what makes Rome great. You are rewarded with the right to be a part of Rome's command structure. Go back to chart. Roman Optio. The Command Structure. The Roman Army. All in all the Roman army consisted of 18 centuries of equites, 82 centuries of the first class (of which 2 centuries were engineers), 20 centuries each of the second, third and fourth classes and 32 centuries of the fifth class (of which 2 centuries were trumpeters).

In the early fourth century BC Rome received its greatest humiliation, as the Gauls sacked Rome itself. If Rome was to reestablish her authority of central Italy, and be prepared to meet any similar disasters in future, some reorganization was needed. These changes were traditionally by the later Romans believed to have been the work of the great hero Fluvius Camillus, but it appears more likely that the reforms were introduced gradually during the second half of the fourth century BC. Undoubtedly the most important change was the abandonment of the use of the Greek phalanx. Italy was not governed by city states like Greece, where armies met on large plains, deemed suitable by both sides, to reach a decision. Principes. The Roman Count: A Comes.