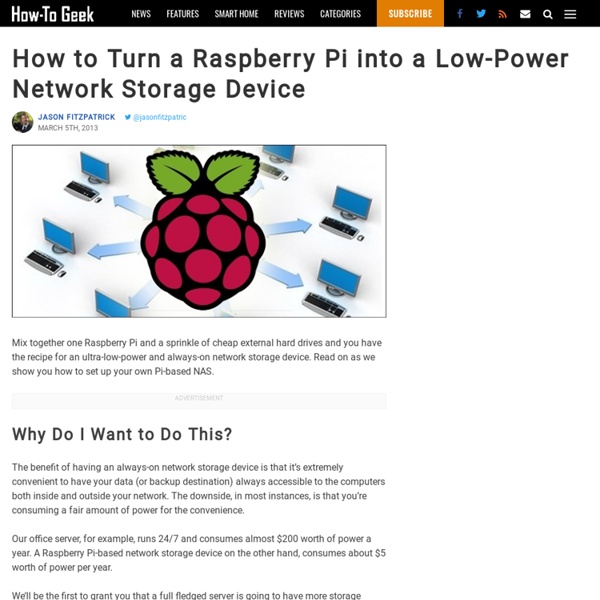 Mix together one Raspberry Pi and a sprinkle of cheap external hard drives and you have the recipe for an ultra-low-power and always-on network storage device. Read on as we show you how to set up your own Pi-based NAS. Why Do I Want to Do This? The benefit of having an always-on network storage device is that it’s extremely convenient to have your data (or backup destination) always accessible to the computers both inside and outside your network. The downside, in most instances, is that you’re consuming a fair amount of power for the convenience. Our office server, for example, runs 24/7 and consumes almost $200 worth of power a year. We’ll be the first to grant you that a full fledged server is going to have more storage space and the capability to do more work (such as transcoding a multi-terabyte video collection in a reasonable span of time). What Do I Need? In addition to the gear you’ll need from the Getting Started with Raspberry Pi tutorial, you’ll only the following hardware: or

DIY Raspberry Pi Torrentbox: Quickly Turn your Raspberry Pi into a Always-on TorrentBox Downloading and seeding Torrents from the computer or any other dedicated server consumes a very fair amount of energy, if you are seeding it 24x7. And it’s also not justified to put the laptop on all the time to just download the Torrent. So here our Pocket sized computer comes into picture: Raspberry Pi.

How to make a DIY home alarm system with a raspberry pi and a webcam Step #1: Make your webcam stealth I wanted to hide the camera in an inconspicuous place outside my door, so I removed the webcam’s casing. The Logitech C270 is a really good choice for this project as (1) it is 100% compatible with pi, (2) it has a really good 720p HD resolution and (3) it is very very small. Here’s how to make the camera ‘stealthy’:

MagPi issue 20 – your free Raspberry Pi magazine, out now Issue 20, February 2014, of the excellent MagPi Magazine was released this week. I’m completely stealing the editorial by Matt from The MagPi team to introduce this issue (as you may have guessed, Liz is away. And I am not as good as Liz at this. There, I said it :)) Anyway, read The MagPi! It’s jam packed with brilliant stuff as ever: — After a massive response, we are pleased to write that the article series ‘Bake your own Pi filling’ is back by popular demand! Turn a Raspberry Pi Into an AirPlay Receiver for Streaming Music in Your Living Room I'm in the process of building a portable boombox using the Raspberry PI, while I have not assembled the case the individual pieces work as intended. The RaspPi will do one of three things on boot: connect to my home network, connect to a USB powered portable access point, or create an ad hoc network (ad hoc has had mixed results with iOS and Android devices). It will then start Shairport. Using a USB sound card it will output to a battery powered Lepai TA2020 amp and Dayton B652 speakers.

Raspberry Pi Owncloud (dropbox clone) Now we have download the software we need to configor it. First off we need to install PHP apc $ sudo pecl install apc MagPi issue 25 – out now! For your weekend reading pleasure, here’s issue 25 of the MagPi! Published just yesterday, the latest issue of everyone’s favourite free, monthly, community-produced Raspberry Pi magazine is as full of fantastic stuff as ever. Click to read The MagPi! The cover story is one that’ll definitely get some attention in our house this weekend: it’s a full Python simulation of the Pocket Enigma Cipher Machine, a cleverly devised toy that demonstrates some of the principles of a real Enigma machine like the one many of you will recognise in the cover photo. Used by the German armed forces during World War II to encipher messages, these used rotating disks to achieve a sophisticated substitution cipher; the Pocket machine, and its Python simulation, use two disks to arrive at a fun, if not exactly unbreakable, cipher.

Tutorial: How to Set Up a Raspberry Pi Web Server - source Blog People are doing a lot of cool things with the Raspberry Pi. One of the first things I thought to do was to see if I could make a Raspberry Pi web server. Being a web developer and overall geek I figured it might be kind of fun to do, and as I found out it’s really easy. My New Course: Hands on Internet of Things with the Raspberry Pi I have just released my new course titled ”Hands on Internet of Things” which is intended to be a course for people who want to get started with IoT.

Hackmypi by MWAGNER Posted on March 3, 2017 at 11:30 PM Home NAS storage with the Raspberry Pi NAS stands for Network Attached Storage. A method for making a hard drive accessible to anyone over a local network, for storage, backups, etc. Most common in the business sector, NAS allows for a common place for all backups to be sent, work to be stored by employees, or common files everyone needs to access to be saved.

Music hack of the decade: Panflute Hero! Jhonny Göransson was part of the team that made what’s simply the daftest and most wonderful music hack we’ve seen so far. The moment he tweeted about it last night, we knew we had to show it to you as soon as we could. It’s called Panflute Hero. Panflute Hero was the result of a weekend at Way Out West Hackathon 2013. Raspberry Pi Print Server: Setup a Network Printer In this tutorial, I will be going through the steps on how to setup a Raspberry Pi Print Server. The process of getting the software installed is pretty simple, but configuring it and getting a Windows network to find the print server is a bit more of an involved process. Setting up a print server is a simple way of bringing your regular USB printer to more modern standards without you having to shell out hundreds of dollars. It allows you to move the printer to wherever you want and have it accessible by multiple computers rather than having it connected straight into a singular computer. It’s also a great way to share a printer without needing a costly tower computer running all the time.