Neuroscience vs art: Let's talk across the divide. Key 34 Jackson Pollock Blue poles, 1952 Enamel and aluminium paint with glass on canvas, 212.1 x 488.9 cm National Gallery of Australia, Canberra © The Pollock-Krasner Foundation ARS, NY and DACS, London 2016 By Martin Kemp I AM in London’s Royal Academy of Arts looking at its Abstract Expressionism exhibition. 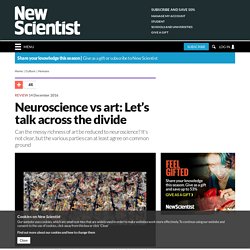 Of the US artists in the show, I am most drawn to Jackson Pollock, famed as “Jack the Dripper” for his anarchic technique, and Mark Rothko, magician of floating veils of colour. Indus script. Seal impression showing a typical inscription of five characters The Indus script (also known as the Harappan script) is a corpus of symbols produced by the Indus Valley Civilization during the Kot Diji and Mature Harappan periods between 3500 and 1900 BC. 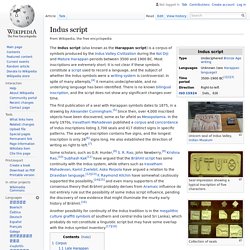 Most inscriptions are extremely short. A new start-up wants to transfer your consciousness to an artificial body so you can live forever. Death is the one thing that's guaranteed in today's uncertain word, but now a new start-up called Humai thinks it might be able to get rid of that inconvenient problem for us too, by promising to transfer people's consciousness into a new, artificial body. 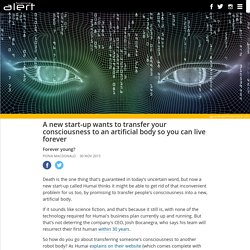 If it sounds like science fiction, and that's because it still is, with none of the technology required for Humai's business plan currently up and running. But that's not deterring the company's CEO, Josh Bocanegra, who says his team will resurrect their first human within 30 years. So how do you go about transferring someone's consciousness to another robot body?

As Humai explains on their website (which comes complete with new-age backing music): Joseph Dietzgen. Life as a revolutionary/philosopher[edit] Early on in his youth, Joseph Dietzgen worked with the famed '48ers of the 1848 German Revolution. 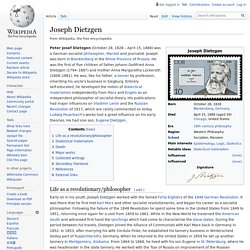 It was there that he first met Karl Marx and other socialist revolutionaries, and began his career as a socialist philosopher. Following the failure of the 1848 Revolution he spent some time in the United States from 1849 to 1851, returning once again for a visit from 1859 to 1861. While in the New World he traversed the American South and witnessed first hand the lynchings which had come to characterize the slave states. Dialectic. Dialectic or dialectics (Greek: διαλεκτική, dialektikḗ), also known as the dialectical method, is a discourse between two or more people holding different points of view about a subject but wishing to establish the truth through reasoned arguments. 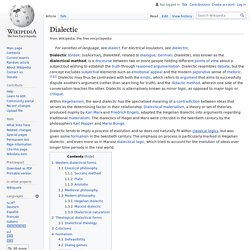 The term was popularized by Plato's Socratic dialogues but the act itself has been central to European and Indian philosophy since ancient history. Dialectical materialism. Dialectical materialism (sometimes abbreviated diamat) is a philosophy of science and nature, based on the writings of Karl Marx and Friedrich Engels, and developed largely in Russia and the Soviet Union.[1][2] It was inspired by dialectic and materialist philosophical traditions. 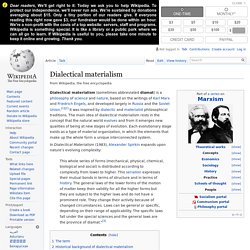 The main idea of dialectical materialism rests in the concept that the natural world evolves and from it emerges new qualities of being at new stages of evolution. Each evolutionary stage exists as a type of material organization, in which the elements that make up the whole form a unique interconnected system. In Dialectical Materialism (1983), Alexander Spirkin expands upon nature’s evolving complexity: The term[edit]

This physicist says consciousness could be a new state of matter. Consciousness isn’t something scientists like to talk about much. 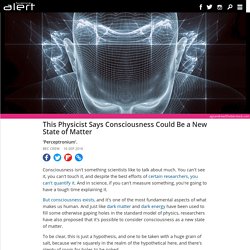 You can’t see it, you can’t touch it, and despite the best efforts of certain researchers, you can’t quantify it. And in science, if you can’t measure something, you’re going to have a tough time explaining it. But consciousness exists, and it’s one of the most fundamental aspects of what makes us human. And just like dark matter and dark energy have been used to fill some otherwise gaping holes in the standard model of physics, researchers have also proposed that it’s possible to consider consciousness as a new state of matter. A technology that can bring dead back to life might be a reality soon.

Bringing the dead back to life is futuristic and final frontier of science and Humai is working on just that. 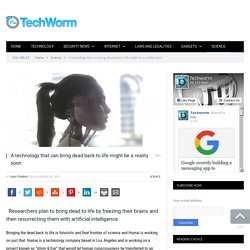 Humai is a technology company based in Los Angeles and is working on a project known as “Atom & Eve” that would let human consciousness be transferred to an artificial body after their death. A technology that can bring dead back to life might be a reality soon. A new start-up wants to transfer your consciousness to an artificial body so you can live forever. The message that goes with its addressee. The nucleic acids invented human beings in order to be able to reproduce themselves even on the Moon (Sol Spiegelman) The idea that Earth was seeded with life by a preceding galactic civilization is usually attributed to Francis Crick and Leslie Orgel. 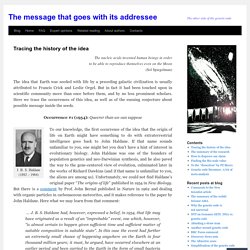 But in fact it had been touched upon in scientific community more than once before them, and by no less prominent scholars. Absolute Music: The History of an Idea: Mark Evan Bonds: 9780199343638: Amazon.com: Books. Journal Home JHI. Dictionary of the History of Ideas. Preface to the Electronic Edition. 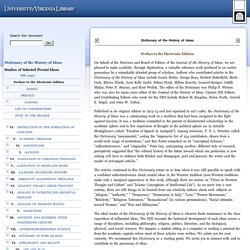 BioScience. Authors Abstract The idea of evolution by natural selection formulated by Charles Darwin and Alfred Russel Wallace is a cornerstone of modern biology, yet few biology students or professionals are familiar with the processes of discovery behind the idea. Focusing on Darwin, I draw on letters, notebooks, and other resources to trace key insights and put them into historical context, illustrating how major elements of Darwin's theory came to him over many years. I further consider how Darwin came to formulate the logical argument structure of his Origin of Species, discussing the philosophical arguments inherent in the book's structure and how this and Darwin's other works can be seen as part of a larger argument and way of looking at the world. I suggest that in teaching evolution today, educators could profitably draw on both Darwin's personal intellectual journey in coming to his ideas, and the compelling argument structure he devised in presenting his theory.

Keywords One longer argument. Mapping the World of Ideas on JSTOR. Planetary Motion: The History of an Idea That Launched the Scientific Revolution : Feature Articles. By Holli Riebeek Design by Robert Simmon July 7, 2009. Process and Reality. Process and Reality is a book by Alfred North Whitehead, in which he propounds a philosophy of organism, also called process philosophy. The book, published in 1929, is a revision of the Gifford Lectures he gave in 1927–28. We diverge from Descartes by holding that what he has described as primary attributes of physical bodies, are really the forms of internal relationships between actual occasions. Such a change of thought is the shift from materialism to Organic Realism, as a basic idea of physical science. — Process and Reality, p. 471. Whitehead's Process and Reality[edit] Musical Preferences are Linked to Cognitive Styles. Abstract Why do we like the music we do?

Research has shown that musical preferences and personality are linked, yet little is known about other influences on preferences such as cognitive styles. To address this gap, we investigated how individual differences in musical preferences are explained by the empathizing-systemizing (E-S) theory. Study 1 examined the links between empathy and musical preferences across four samples. Antipositivism. Antipositivism (also known as interpretive or negativism) is the belief within social science that the social realm may not be subject to the same methods of investigation as the natural world; the social realm requires a different epistemology in which academics work beyond empiricism and the scientific method.

Antipositivists hold that researchers need to be, first, aware that our concepts, ideas, and language shape how we think about the social world. Therefore, antipositivists focus on understanding the interpretative method employed.[1][need quotation to verify] Concept[edit] Beginning with Giambattista Vico in the early eighteenth century, and later with Montesquieu, there was a separation between natural history and human history. The former is not directly under man's control whereas the latter is in fact man's creation. In the early nineteenth century, various intellectuals, led by the Hegelians, questioned the prospect of empirical social analysis.

Epistemology. Epistemology ( i/ᵻˌpɪstᵻˈmɒlədʒi/; from Greek ἐπιστήμη, epistēmē, meaning "knowledge", and λόγος, logos, meaning "word") is the branch of philosophy concerned with the theory of knowledge.[1] Montesquieu. Maybe later |Close. Positivism. Positivism is a philosophy of science based on the view that information derived from logical and mathematical treatments and reports of sensory experience is the exclusive source of all authoritative knowledge,[1] and that there is valid knowledge (truth) only in scientific knowledge.[2] Verified data received from the senses are known as empirical evidence.[1] This view holds that society, like the physical world, operates according to general laws.