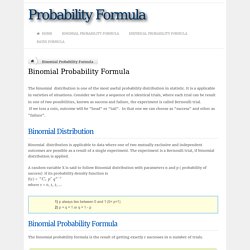 It is a applicable in varieties of situations. Consider we have a sequence of n identical trials, where each trial can be result in one of two possibilities, known as success and failure, the experiment is called Bernoulli trial. Calculating Probability Formula. Definition Probability means the chance or the likelihood ofoccurrence of an event. 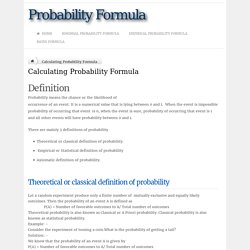 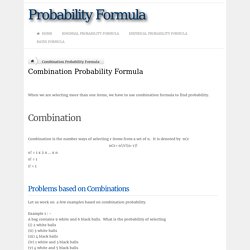 Combination Combination is the number ways of selecting r items from a set of n. It is denoted by nCr nCr= n! /r! Probability Distribution Formula. Random Variable A Random variable is a real valued function defined over the sample space of a random experiment. 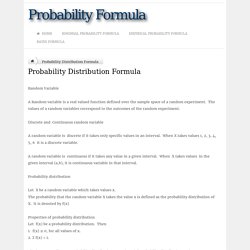 The values of a random variables correspond to the outcomes of the random experiment. How Does Linux Kernel Work? Short Bytes: The Linux kernel is the most used piece of software in the history of computing. 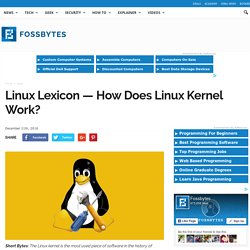 It’s everywhere. It’s in computers, servers, phones, TVs, set-top boxes, submarines, airplanes, self-driving cars, and it even runs the International Space Station. But how does it work? That’s more than a mouthful, so I’ll try to break it up into some more manageable chunks, here. The Linux kernel is made up of over 21 million lines of code, each specifying their own important instructions. Normalizing fascists. How to report on a fascist? 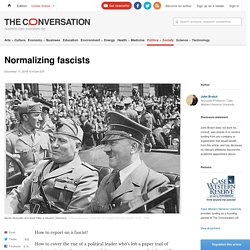 How to cover the rise of a political leader who’s left a paper trail of anti-constitutionalism, racism and the encouragement of violence? Does the press take the position that its subject acts outside the norms of society? What Was The World's First Programming Language For Computers? Short Bytes: Even though there’s not a definite answer, Plankalkül, pronounced “Plan Calculus”, is regarded as the world’s first high-level programming language for computers. 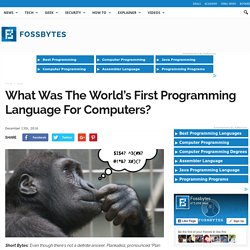 Created by German engineer Konrad Zuse between 1942 and 1945, the language didn’t receive much attention. The popular languages that followed Plankalkül were Fortran and Lisp. Every other day, we come across the release of some new programming language. Nokia display on VoCore. Vocore_5110_demo/spi_disp_test.c at master · GreenWire-Elektronik/vocore_5110_demo. Earth is totally unprepared for a surprise asteroid strike, NASA scientists warn. NASA is certainly not in the business of spreading panic over asteroid strikes - every time one comes close, we see yet another press release telling us that all known 'potentially hazardous asteroids' have less than a 0.01 percent chance of impacting Earth in the next 100 years. 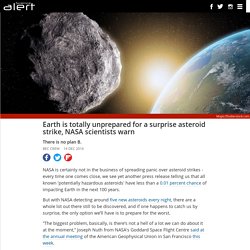 But with NASA detecting around five new asteroids every night, there are a whole lot out there still to be discovered, and if one happens to catch us by surprise, the only option we’ll have is to prepare for the worst. "The biggest problem, basically, is there’s not a hell of a lot we can do about it at the moment," Joseph Nuth from NASA's Goddard Space Flight Centre said at the annual meeting of the American Geophysical Union in San Francisco this week. Arduino IDE projects. Please complete the following to continue: Already have an account? 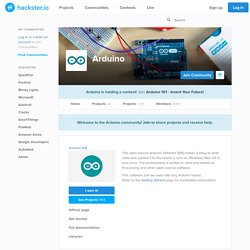 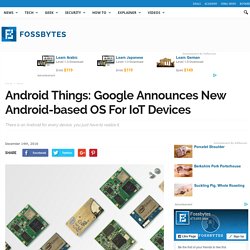 It comes with different tools like Android SDK, Android Studio, Google Play Services, etc. The interested users can go ahead and grab the Developer Preview from Google’s website. Android Things is a new platform that Google has created to propel the development of IoT (Internet of Things) devices using Google Services and Android APIs. Google has also announced the developer preview of this comprehensive IoT platform.

Android Things pairs with Google existing pack of operating systems – including Android Wear, Android Auto, and Android TV – intended for different devices category. What are the key differences between python 2 and python 3 - Coding Security. Python is a widely used high-level, general-purpose, interpreted, dynamic programming language. Its design philosophy emphasizes code readability, and its syntax allows programmers to express concepts in fewer lines of code than possible in languages such as C++ or Java. The language provides constructs intended to enable writing clear programs on both a small and large scale.

Python supports multiple programming paradigms, including object-oriented, imperative and functional programming or procedural styles. Tech Xplore - From a 2-D view comes a 3-D face model using deep neural networks. (Tech Xplore)—Whether it's for gaming, entertainment, or education purposes, you can expect to see researchers aiming for techniques to bring you high visual impact in the virtual space, now that we are becoming increasingly linked to living and learning online. Recent news is that a detailed 3-D face can be created just from a single picture. You input a 2-D image and the output is a good, textured 3-D face model. Sidney Fussell in Gizmodo said the researchers' results were "remarkably accurate. " How blockchain will transform our cities. Many trends on the horizon offer opportunities that could transform our cities.

From self-driving vehicles and the sharing economy through to cloud computing and blockchain technologies, each of these trends is quite significant on its own. But the convergence of their disruptive forces is what will create real value and drive innovations. Take blockchain and the sharing economy as an example. How to code the Sense HAT for Raspberry Pi in your web browser. Now you can code the Sense HAT for Raspberry Pi in an emulator in your web browser, without any hardware. You may be familiar with the Sense HAT, an add-on board for the Raspberry Pi which was made especially for a space mission with British ESA Astronaut Tim Peake for Astro Pi.