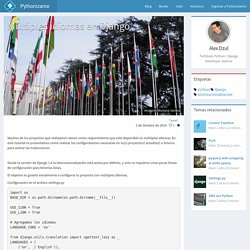 How to Upload Files With Django. Updated at Aug 1, 2016: As suggested by @fapolloner, I've removed the manual file handling. 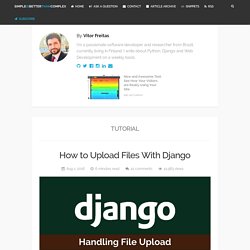 Updated the example using FileSystemStorage instead. Thanks! In this tutorial you will learn the concepts behind Django file upload and how to handle file upload using model forms. In the end of this post you will find the source code of the examples I used so you can try and explore. The Basics of File Upload With Django When files are submitted to the server, the file data ends up placed in request.FILES.

It is mandatory for the HTML form to have the attribute enctype="multipart/form-data" set correctly. The form must be submitted using the POST method. Django have proper model fields to handle uploaded files: FileField and ImageField. The files uploaded to FileField or ImageField are not stored in the database but in the filesystem. FileField and ImageField are created as a string field in the database (usually VARCHAR), containing the reference to the actual file.

Simple File Upload. Django Tutorial: The Local Library website - Learn web development. The first article in our practical tutorial series explains what you'll learn, and provides an overview of the "local library" example website we'll be working through and evolving in subsequent articles. 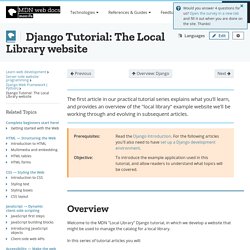 Overview Welcome to the MDN "Local Library" Django tutorial, in which we develop a website that might be used to manage the catalog for a local library. In this series of tutorial articles you will: Use Django's tools to create a skeleton website and application. Start and stop the development server. You have learnt about some of these topics already, and touched briefly on others. The LocalLibrary website LocalLibrary is the name of the website that we'll create and evolve over the course of this series of tutorials. This example has been carefully chosen because it can scale to show as much or little detail as we need, and can be used to show off almost any Django feature. I'm stuck, where can I get the source? Summary In this module Document Tags and Contributors. Deploy! · Django Girls Tutorial. Note The following chapter can be sometimes a bit hard to get through. Persist and finish it; deployment is an important part of the website development process.

This chapter is placed in the middle of the tutorial so that your mentor can help with the slightly trickier process of getting your website online. This means you can still finish the tutorial on your own if you run out of time. Until now, your website was only available on your computer. Now you will learn how to deploy it! As you learned, a website has to be located on a server. The other external service we'll be using is GitHub, which is a code hosting service. These three places will be important to you. Note If you already did the Installation steps, there's no need to do this again – you can skip to the next section and start creating your Git repository. Git is a "version control system" used by a lot of programmers. Installing Git Starting our Git repository command-line. Introduction · Django Girls Tutorial: Extensions. How To Deploy Django App on Heroku. Heroku is a cloud application platform that provides hosting services for multiple programming languages, including Python. 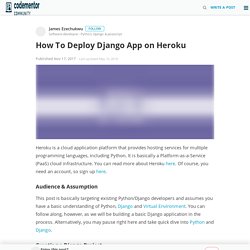 It is basically a Platform-as-a-Service (PaaS) cloud infrastructure. You can read more about Heroku here. Of course, you need an account, so sign up here. Audience & Assumption This post is basically targeting existing Python/Django developers and assumes you have a basic understanding of Python, Django and Virtual Environment. Creating a Django Project Virtual Environment Using Virtual environments allows you to avoid installing Python packages globally and run multiple instances of web applications on different versions of Python and Django, on a single machine. Before we start, we need to create a virtualenv for our app, so open up your Command Prompt (for Windows) or Terminal (for Mac, Linux) and type the following: