20 Amazing Facts about the Human Body That We Never Knew. We tend to think that we know our own bodies perfectly. 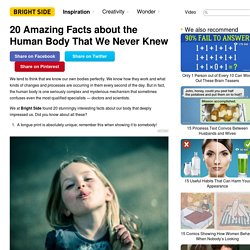 We know how they work and what kinds of changes and processes are occurring in them every second of the day. But in fact, the human body is one seriously complex and mysterious mechanism that sometimes confuses even the most qualified specialists — doctors and scientists. We at Bright Side found 20 stunningly interesting facts about our body that deeply impressed us. Consciousness could be a side effect of 'entropy', say researchers. It's impressive enough that our human brains are made up of the same 'star stuff' that forms the Universe, but new research suggests that this might not be the only thing the two have in common. 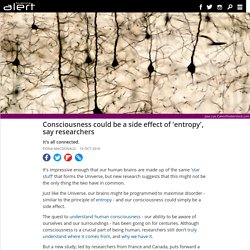 Just like the Universe, our brains might be programmed to maximise disorder - similar to the principle of entropy - and our consciousness could simply be a side effect. The quest to understand human consciousness - our ability to be aware of ourselves and our surroundings - has been going on for centuries. Although consciousness is a crucial part of being human, researchers still don't truly understand where it comes from, and why we have it. We might finally know what's causing Namibia's super weird fairy circles. The force behind these vast plains of polka-dotted sand have been a subject of debate for decades, but now scientists have come up with the best explanation yet. 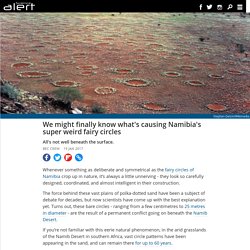 Turns out, these bare circles - ranging from a few centimetres to 25 metres in diameter - are the result of a permanent conflict going on beneath the Namib Desert. If you’re not familiar with this eerie natural phenomenon, in the arid grasslands of the Namib Desert in southern Africa, vast circle patterns have been appearing in the sand, and can remain there for up to 60 years. The local Himba people refer to them as the footsteps of the gods, because of how stark and intentional they appear, and over the past few years, studies have narrowed down the possible explanations to two. Scientists have invented the strongest and lightest material on Earth.

Strong and Porous For years, researchers have known that carbon, when arranged in a certain way, can be very strong. 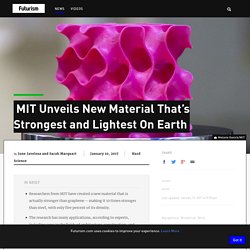 Case in point: graphene. Constance Kent - Wikipedia. She was born in Sidmouth, Devon in 1844, the daughter of Mary Ann Kent (1808–1852) and Samuel Saville Kent (1801–1872), an Inspector of Factories for the Home Office.[1] Crime[edit] Sometime during the night of 29 June and the morning of 30 June 1860, Francis "Saville" Kent, almost four years old, disappeared from his room in his father, Samuel Kent's house called the Road Hill House, in the village of Rode (spelled "Road" at the time), then in Wiltshire. 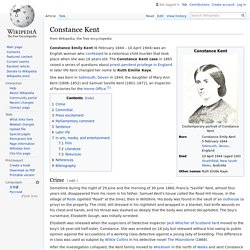 His body was found in the vault of an outhouse (a privy) on the property. The child, still dressed in his nightshirt and wrapped in a blanket, had knife wounds on his chest and hands, and his throat was slashed so deeply that the body was almost decapitated. The Greentree Cabin. Cabin Life - Affordable Housing The Casaurina 20m2 - Granny Flat 2017. Click here to see our facebook page and you tubes. 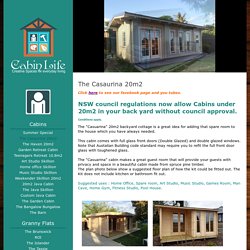 The "Casuarina" 20m2 backyard cottage is a great idea for adding that spare room to the house which you have always needed. This cabin comes with full glass front doors (Double Glazed) and double glazed windows. Note that Austalian Building code standard may require you to refit the full front door glass with toughened glass. Luc Besson filmography - Wikipedia. Luc Besson is a French film director, writer and producer. 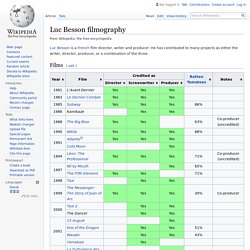 He has contributed to many projects as either the writer, director, producer, or a combination of the three. Films[edit] References[edit] Hyperpolyglot — A Useful Side-By-Side Programming Reference Sheet. What is a hyperpolyglot? 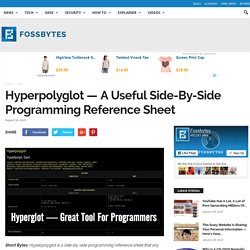 It’s a person who masters or becomes fluent in multiple languages (six or more). If we talk about experienced programmers, a hyperpolyglot would be a person who knows multiple programming languages. By applying similar concepts and syntax, he/she is able to work on more than one platforms. Hyperpolyglot — A Useful Side-By-Side Programming Reference Sheet. Programming Languages. Aboriginal Australians co-existed with the megafauna for at least 17,000 years. Australia was once home to giant reptiles, marsupials and birds (and some not so giant), but the extinction of this megafauna has been the subject of a debate that has persisted since the 19th century. 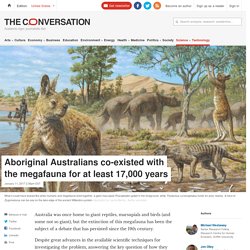 Despite great advances in the available scientific techniques for investigating the problem, answering the key question of how they became extinct has remained illusive. Indeed, the same questions as those asked in the 19th century by scientists, such as the British comparative anatomist Sir Richard Owen and the Prussian scientist and explorer Ludwig Leichhardt, remain: were people responsible for their demise or was it climate change? Our new research, published in the latest Quaternary Science Reviews journal, shows that early humans to Australian lived alongside some of the megafauna for many thousands of years before the animals became extinct. The First Australians. Why OOP is required in a programmer's life - Coding Security. This blog post is those still new to programming and have probably heard about “object-oriented programming”, “OOP”, “classes”, “inheritance/encapsulation/polymorphism”, and other computer science terms but still don’t get what exactly OOP is used for. 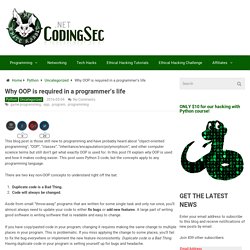 In this post I’ll explain why OOP is used and how it makes coding easier. This post uses Python 3 code, but the concepts apply to any programming language. The absolute absurdity of detecting gravitational waves. By now, we're sure you're all very familiar with the fact that scientists detected ripples in space time called gravitational waves for the first time last year, almost 100 years after Einstein first predicted them. It was, and still is, a huge deal, because now we have an entirely new way to study the Universe - and by most accounts, it was the biggest science story of 2016.

But what you didn't read in all those articles and headlines was how absolutely absurd the entire process of detecting those gravitational waves really was. Finland Will Become The First Country In The World To Get Rid Of All School Subjects. In an era of technology and easily accessible information, our schools still expect from us to know everything from the books, without considering whether this is going to be what we will actually need in our professional development. How many times have you wondered if you were going to need a subjects you were made to learn because the curriculum said so? Finland has decided to change this in their educational system and introduce something which is suitable for the 21st century.

By 2020, instead of classes in physics, math, literature, history or geography, Finland is going to introduce a different approach to life through education. What did Big Data find when it analyzed 150 years of British history? What could be learnt about the world if you could read the news from over 100 local newspapers for a period of 150 years? This is what a team of Artificial Intelligence (AI) researchers from the University of Bristol have done, together with a social scientist and a historian, who had access to 150 years of British regional newspapers. The patterns that emerged from the automated analysis of 35 million articles ranged from the detection of major events, to the subtle variations in gender bias across the decades. The study has investigated transitions such as the uptake of new technologies and even new political ideas, in a new way that is more like genomic studies than traditional historical investigation.

The team of academics, led by Professor Nello Cristianini, collaborated closely with the company findmypast, who is digitising historical newspapers from the British Library as part of their British Newspaper Archive project. H2 — This Futuristic Smartphone Can See "Inside" All Objects. Short Bytes: A Chinese company named Changhong has created a phone, H2, that’s able to see inside the objects and detect their chemical composition. Simply point the phone to the object and it’ll show information like sugar content of a fruit, fat in your body, or cocoa solid concentration in chocolate.

The phone uses a mini version of a handheld molecular scanning gadget named SCiO. Modern day smartphones do a lot more than just calling and texting. Moreover, they’ve even replaced the bulky computers in many spheres of our lives. Modus Season 1 - Via Vision Entertainment. Disconnecting from the Matrix and Reconnecting with Consciousness · The Mind Unleashed. We do not need solutions to the ills of the world. We need to remove the cause of the problem and that is ignorance and arrogance. These are inseparable partners in the war on human awareness and innate intelligence. The stupidity of ignorance can only survive through the blindness of arrogance. They need each other for their mutual prosperity.

Einstein said: “The one who follows the crowd will usually get no further than the crowd. Imago Mundi is the name of the Babylonian map which is the oldest in the world. This Zen Comic Is Full of Timeless Life Lessons · The Mind Unleashed. On Wisdom. Tech Xplore - Liquid metal 3-D printing could revolutionize how things are made. Do Not Stand at My Grave and Weep. Do Not Go Gentle Into That Good Night by Dylan Thomas - Famous poems, famous poets. - All Poetry. Count Number of Time Word Shows up In Text File (Python)