The biggest legal threat to Uber’s business just got a whole lot bigger. Before his detention last year, Pu Zhiqiang, one of China’s best-known human rights lawyers, was an outspoken Internet commentator on the Twitter-like microblogging site Sina Weibo. 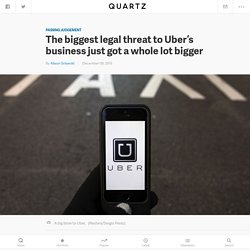 Between 2011 to 2014, the former defense lawyer for artist Ai Weiwei had sent some 20,000 tweets—most of them sarcastic criticisms of the ruling Communist Party’s policies—via 12 accounts in order to avoid censorship. “From top to bottom,” he said in one post, “the Communist Party cannot survive without telling lies.” Since attending a seminar on the the 1989 Tiananmen Square protests last May, Pu has been criminally detained without a trail. Beijing prosecutors indicted Pu in May on charges of “inciting ethnic hatred” and “creating a disturbance” for about 30 of his Weibo posts (paywall) while dropped the other two charges of “inciting separatism” and “illegally obtaining personal information.” Fortune. Uber is one of those companies that inspires strong feelings in people—some good, some very, very bad. 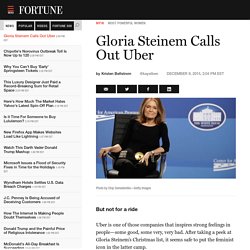 After taking a peek at Gloria Steinem’s Christmas list, it seems safe to put the feminist icon in the latter camp. Speaking at a Dec. 5 holiday show for the Betty Effect, an organization that uses music to empower women for social change, Steinem unleashed a list of the “top 10 things I want for Christmas.” And while her rundown doled out praise to a few—including President Obama—it’s the “naughty” portion of the list where things get interesting. One target, coming in at No. 5: Uber. Here’s what Steinem had to say about the ride-hailing giant: I want Uber to stop charging for the weather—nobody, not even airlines, charge for the weather! Steinem’s first complaint appears to refer to Uber’s surge pricing policy, under which prices rise as demand increases, such as during bad weather. Her second point, though, remains hotly debated. How Uber Controls Its Drivers Despite Its Claims to Be a Neutral Platform. 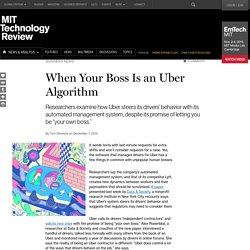 Yes, the software that manages drivers for Uber has a few things in common with unpopular human bosses. Researchers say the company’s automated management system, and that of its competitor Lyft, creates new dynamics between workers and their paymasters that should be scrutinized. A paper presented last week by Data & Society, a nonprofit research institute in New York City, recounts ways that Uber’s system steers its drivers’ behavior and suggests that regulators may need to consider them. Uber calls its drivers “independent contractors” and solicits new ones with the promise of being “your own boss.” Alex Rosenblat, a researcher at Data & Society and coauthor of the new paper, interviewed a handful of drivers, talked less formally with many others from the back of an Uber, and monitored nearly a year of discussions by drivers in online forums. Untitled.

Will we all end up self-employed if digital platforms continue to spread? 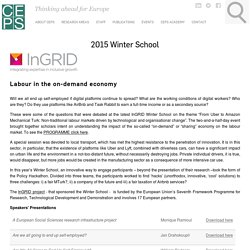 What are the working conditions of digital workers? Who are they? Do they use platforms like AirBnb and Task Rabbit to earn a full-time income or as a secondary source? These were some of the questions that were debated at the latest InGRID Winter School on the theme “From Uber to Amazon Mechanical Turk: Non-traditional labour markets driven by technological and organisational change”. The two-and-a-half-day event brought together scholars intent on understanding the impact of the so-called “on-demand” or “sharing” economy on the labour market. A special session was devoted to local transport, which has met the highest resistance to the penetration of innovation. 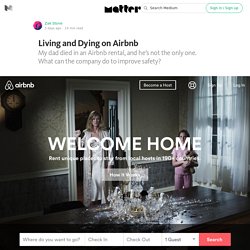 What can the company do to improve safety? The rope swing looked inviting. Photos of it on Airbnb brought my family to the cottage in Texas. Hanging from a tree as casually as baggy jeans, the swing was the essence of leisure, of Southern hospitality, of escape. I was in bed when my mom found him. What do you do in this situation? “Tell me each time he takes a breath,” the 911 dispatcher said in my ear. “He’s breathing in; he’s breathing out.

The EMTs arrived and suctioned the blood away from his face to see the damage. I scrubbed the blood off my lips and took off my soaking sweatshirt. “It’s only a matter of time until something terrible happens,” The New York Times’s Ron Lieber wrote in a 2012 piece examining Airbnb’s liability issues. Since the incident, I’ve felt isolated by the burden of this story and my sense of obligation to go public with it, but with an unclear aim. My home is your home.