World's first cyborg wants to hack your body. In a world where technology is overwhelming our mental focus and social lives, Harbisson, 32, has a closer relationship with technology than even the most avid smartphone user. 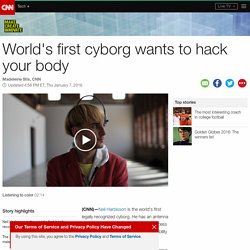 As a child growing up in a coastal town in Catalonia, Spain, Harbisson was diagnosed with achromatopsia, complete color-blindness. In 2004, he decided to find a way out of his black-and-white world, by developing a technology that would provide him with a sensory experience that no other human had ever experienced. The idea came while studying experimental music composition at Dartington College of Arts in Devon, England. For his final project, Harbisson and the computer scientist Adam Montandon developed the first incarnation of what they called the "eyeborg. " Smart guns, fingertip vaults and steel safes: Tech to make guns safe - Jan. 7, 2016. "We need to develop new technologies to make guns safer," Obama said Tuesday, as he announced an executive action to try to curb gun deaths. 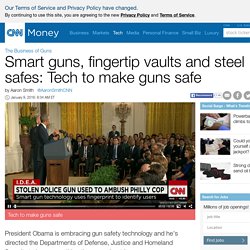 Gun safety technology is a blanket term for different types of devices used to secure guns to keep them from falling into the wrong hands. Both sides of the gun debate say they support gun safety. But it's more complicated than that. Gun security is often associated with smart guns, which only fire when activated by the owner. The NRA says it doesn't oppose smart guns, but it does oppose a New Jersey law that requires retailers to sell them. "We've never had a problem with smart gun technology," said NRA spokesman Lars Dalseide. Obama is participating in a town hall meeting on CNN on Thursday at 8 p.m. Armatix smart gun Smart guns are a new technology that didn't even exist when New Jersey passed a law in 2002 requiring retailers to sell them.

"The future of the firearm. Winchester Safes: Big Daddy and Bandit GunVault Identilock. BBC Make It Digital. BBC iWonder - Can big data help us predict where crime will strike? Scientists say humans have now brought on an entirely new geologic epoch. In this Dec. 16, 2009, photo, steam and smoke rise from a coal burning power plant in Gelsenkirchen, Germany. 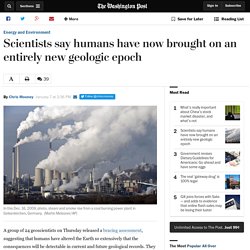 (Martin Meissner/AP) A group of 24 geoscientists on Thursday released a bracing assessment, suggesting that humans have altered the Earth so extensively that the consequences will be detectable in current and future geological records. They therefore suggest that we should consider the Earth to have moved into a new geologic epoch, the “Anthropocene,” sometime circa 1945-1964. The current era (at least under present definitions), known as the Holocene, began about 11,700 years ago, and was marked by warming and large sea level rise coming out of a major cool period, the Younger Dryas. Apple Buys Startup That Sees What's Behind Your Smile. Apple Inc. bought the artificial intelligence startup Emotient that specializes in facial recognition technology that interprets people’s emotions as they watch videos and other media. 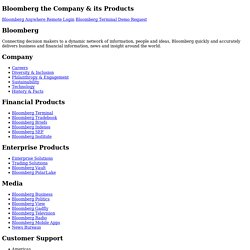 Apple confirmed the purchase Thursday without giving terms or describing its plans for the San Diego, California-based company. Emotient has tailored its facial-recognition software to advertising, media testing, audience response and research and other areas, according to its website. Artificial intelligence has become a strategically important area for Apple as it seeks to build smart software tying together its numerous products. The world’s most valuable company has sought to hire more people to conduct advanced research in the field and acquired two other AI startups - Perceptio and VocalIQ - in recent months. The latest in gadgets: Making apps and robots that think. The latest developments surrounding the consumer-electronics show in Las Vegas known as CES (all times local): 6:15 p.m. 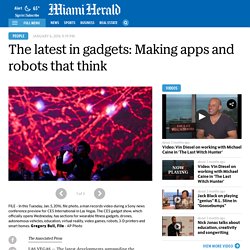 IBM CEO Virginia Rometty says the future of gadgets is not just connectivity, but the ability to analyze and "think. " While IBM isn't known for consumer technology, Rometty argued that her company's "Watson" artificial brain can enhance a variety of consumer products. In a talk Wednesday at the CES gadget show, she announced new partnerships with three companies that will use Watson, the IBM "cognitive computing" system that ran the table on Jeopardy a few years back. Under Armour, the athletic apparel maker, is releasing a fitness app that uses Watson to analyze a users' activity, weight and other data to make personalized recommendations for diet and exercise. 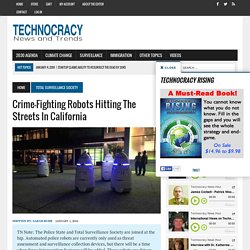 Automated police robots are currently only used as threat assessment and surveillance collection devices, but there will be a time when force/intervention features will be added. These robots are driven by AI, of course, and communicate everything the see, hear and think back to a central computer for analysis. This is a bad trend but one that will greatly further the aspirations of technocrats everywhere.

A closer look at Intel and Xiaomi's Ninebot Segway Robot.