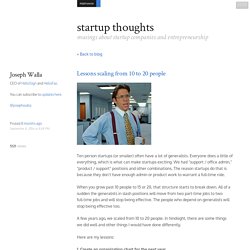 Everyone does a little of everything, which is what can make startups exciting. We had “support / office admin,” “product / support” positions and other combinations. Themacro. For weekly re­caps of The Macro, sign up here. 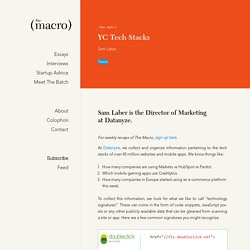 At Datanyze, we col­lect and or­ga­nize in­for­ma­tion per­tain­ing to the tech stacks of over 45 mil­lion web­sites and mo­bile apps. We know things like: How many com­pa­nies are using Mar­keto vs Hub­Spot vs Par­dot. Which mo­bile gam­ing apps use Crash­lyt­ics. Startups in 13 Sentences. February 2009 One of the things I always tell startups is a principle I learned from Paul Buchheit: it's better to make a few people really happy than to make a lot of people semi-happy. 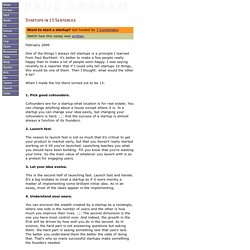 I was saying recently to a reporter that if I could only tell startups 10 things, this would be one of them. Then I thought: what would the other 9 be? When I made the list there turned out to be 13: 1. Cofounders are for a startup what location is for real estate. 2. The reason to launch fast is not so much that it's critical to get your product to market early, but that you haven't really started working on it till you've launched. 3. This is the second half of launching fast. 4. You can envision the wealth created by a startup as a rectangle, where one side is the number of users and the other is how much you improve their lives. [2] The second dimension is the one you have most control over. 5. Startup Engineering. About the Course Spiritual sequel to Peter Thiel's CS183 course on startups. 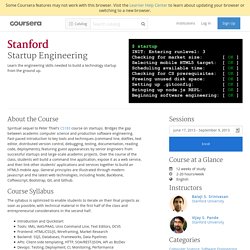 UPDATE November 25, 2015: We have a brand-new salary formula and an updated, searchable list of all our salaries. 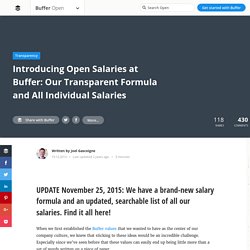 Find it all here! When we first established the Buffer values that we wanted to have as the center of our company culture, we knew that sticking to these ideas would be an incredible challenge. Especially since we’ve seen before that these values can easily end up being little more than a set of words written on a piece of paper. In our culture deck, the second value on our list at Buffer is “Default to Transparency.” How to Start a Startup. Things you should know about stock options before negotiating an offer. Are you considering an offer from a private company, which involves stock options? 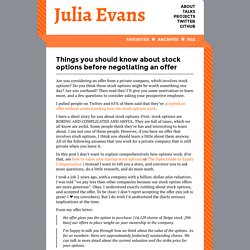 Do you think those stock options might be worth something one day? Are you confused? Then read this! Startup Business Failure Rate By Industry. Autopsy. Developer Productivity: The Art of Saying No. Staying productive is hard. 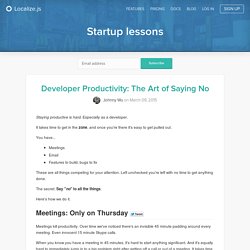 Especially as a developer. It takes time to get in the zone, and once you're there it's easy to get pulled out. You have... Meetings Email Features to build, bugs to fix These are all things competing for your attention. The secret: Say "no" to all the things. Here's how we do it. How to convince a startup to hire you by. This is part of an ongoing startup advice series where I answer (anonymized!) 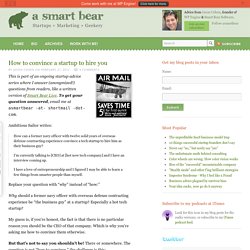 Sorry, Travis, but I'm boycotting Uber. It pains me to have to delete the Uber app; in fact, I've been procrastinating on pulling the trigger all day. 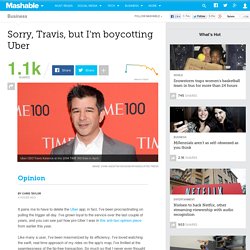 I've grown loyal to the service over the last couple of years, and you can see just how pro-Uber I was in this anti-taxi opinion piece from earlier this year. Like many a user, I've been mesmerized by its efficiency. Startups in 13 Sentences. February 2009. 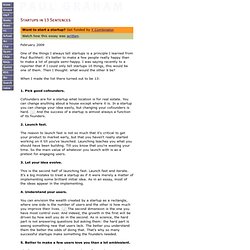 The Myths You’ll Hear About Working as an Engineer at a Startup — Karl L. Hughes. When I first graduated from college and went looking for a job with a startup I had no idea what to expect. I knew what I didn’t want – I had done internships with some huge corporations already – but finding honest accounts from engineers who had worked at startups was difficult. Most of the articles I found were glorious sugarcoated accounts of the rare success stories. Startup Growth Calculator. How to Model Viral Growth: The Hybrid Model. Retention is King (Guest Post) This is a guest post by a friend of mine on retention. Jamie Quint is Managing Partner of Quint Growth, a full-service growth consultancy that works with companies like Twitch and Hipmunk. Previously, he was the PM of Growth at Swipely and a Y Combinator alum. Experiments at Airbnb. Airbnb is an online two-sided marketplace that matches people who rent out their homes (‘hosts’) with people who are looking for a place to stay (‘guests’).

Some, like stopping an experiment too soon, are relevant to most experiments. Others, like the issue of introducing bias on a marketplace level, start becoming relevant for a more specialized application like Airbnb. (1) What are the most common mistakes first-time entrepreneurs make? Lessons learned? Rate-of-learning: the most valuable startup compensation. The frothiness of today’s environment in Silicon Valley makes it easy to get sucked into a warped sense of reality.

Valuations are high, capital is cheap, housing prices are skyrocketing, and RSUs are flowing like wine. Talk of another “bubble” is rebuffed, even by those who were scarred by the Dot-com collapse of 2000. Some argue we’ve exited the installation phase of technology—which was still sputtering along at the dawn of the new millennium—and have entered what Carlota Perez calls the ‘deployment phase’ of technology.

In this phase, startups move “up the stack”, switching from building core infrastructure (i.e. interstate highways) to applications that go on top of it (i.e. Teslas). Undoubtedly, changes in technology over the last 15 years have been breathtaking. Design, science, education & Innovation. 57 startup lessons. What Makes Founders Succeed - Founders at Work posthaven. Some kind of magic happens in startups, especially at the very beginning, but the only people there to see it are the founders.