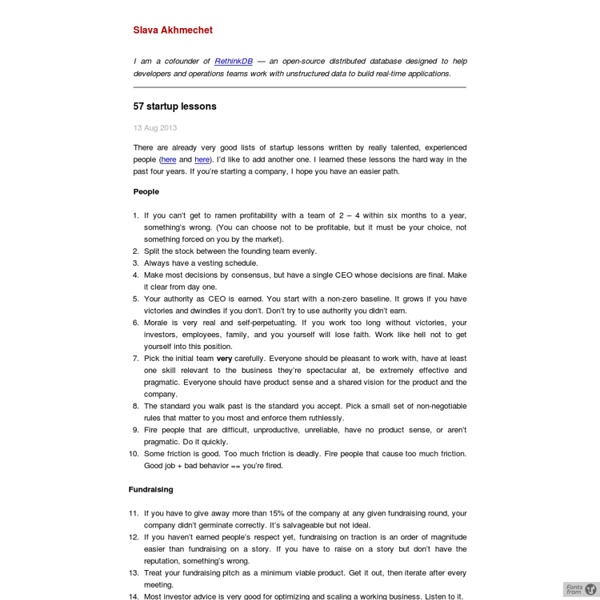 I am a cofounder of RethinkDB — an open-source distributed database designed to help developers and operations teams work with unstructured data to build real-time applications. There are already very good lists of startup lessons written by really talented, experienced people (here and here). I’d like to add another one. I learned these lessons the hard way in the past four years. If you’re starting a company, I hope you have an easier path. People If you can’t get to ramen profitability with a team of 2 – 4 within six months to a year, something’s wrong. Fundraising If you have to give away more than 15% of the company at any given fundraising round, your company didn’t germinate correctly. Markets The best products don’t get built in a vacuum. Products Product sense is everything. Marketing Product comes first. Sales Sales fix everything. Development Development speed is everything. Company administration Personal well-being Thanks to Michael Glukhovsky for reviewing this post.

The Ups & Downs: How Startup Life is Like a Rollercoaster This guest post is written by Mark Fabian Henkel (@mrkhnkl) Co-founder and CEO of Paymill, a young startup that offers the fastest and easiest way to integrate credit and debit card payments in websites and mobile applications. I sometimes wonder why Start-up CEOs or other entrepreneurs are not committing suicide more often. Just kidding! But honestly who can stand this rollercoaster without any injuries? The answer is simple: It is the belief in success, the confidence in a happy ending that keeps everybody working on his dream – somewhat similar to gold-diggers. But what exactly is the rollercoaster?

5 Leadership Tips From John F. Kennedy’s Darkside Forget the bold words and speeches of John F. Kennedy. Let’s look at his actions. John F. Kennedy undoubtedly holds an allure over Americans as the young, attractive Catholic that presided over “Camelot” and fought for the ideals of a new generation. But his dark traits have also been well established over the last 40 years. The Top 10 Audio Books That Every Entrepreneur Must Listen To With a million and one things on an entrepreneur’s agenda, it is almost next to impossible to find the time to read a book from front to back. Well what if we told you that you don’t have to push hours aside and that you can even soak in all the knowledge of a wonderful read while you walk the dog, go for a jog or drive to work? Well now you can with these downloadable audio books that come highly recommend for any entrepreneur looking at expanding their knowledge and taking their life and business to that next level. The Lean Startup

Setting Up Tomcat For Remote Debugging - WG: Programmer's Cafe Tomcat can be configured to allow a program such as eclipse to connect remotely using JPDA and see debugging information. (powerpoint presentation) To configure tomcat to allow remote debugging, start tomcat using the catalina startup script (from your tomcat home) instead of the normal startup script like so (tomcat must be stopped before you can change over): WIN: We recommend adding this stuff to your startup script so that you are always running tomcat in debug mode. Open the startup script in (your_tomcat_home)/bin (WIN: startup.bat, UNIX: startup.sh) Add the following lines at the first blank line in the file (around line 8) WIN: UNIX: Change the execute line at the end to include jpda start WIN: UNIX: Run the startup script when starting tomcat to run tomcat in debug mode If you're concerned about opening up the known port for debugging, you can change the port on which JPDA listens by setting the JPDA_ADDRESS environment variable to something else (e.g. 38000).

Lima’s $1.2M KickStarter joins the Top 10 most funded campaigns. What’s next? Yesterday evening at 7:00PM, French startup Forgetbox wrapped up their 60-day KickStarter campaign for their flagship product Lima, which was looking to crowdfund $69,000. They surpassed that goal – in fact, they did it in less than 24 hours. In the 59 days that followed, they managed to crowdfund an additional $1,160,074 from a total of 12,840 backers. As of today, Lima becomes the 6th most-funded technology project on KickStarter, behind well-known companies like the Oculus Rift & LIFX, and ahead of (that is, more total crowdfunding) SmartThings, a major player in the Internet of Things industry.

101 Useful Resources for Online Entrepreneurs Every day more and more entrepreneurs are building successful businesses using the internet. There is an abundance of opportunity online and depending on the venture, there is often less cost and risk involved when compared with traditional businesses. There is also a wealth of resources available to help the online entrepreneur to run a business more effectively and more profitably, and we list many of those resources here. Feel free to leave a comment with your feedback and your recommendations of other resources.

Multi-Threaded Programming 2: Communication The next step in learning about multi-threaded programming is going to involve seeing how threads communicate with each other. This is important so that it is understandable why many of the pitfalls when programming with multiple threads exist. I am going to stick with x86-64 based architectures for simplicity, but this is pretty applicable to all computing devices from my experience. If you want to read up on other things that I have covered, then here is my previous post in this series: Multi-Threaded Programming 1: Basics Reading From Memory