Cookies are Not Accepted - New York Times. Destroy All Software. Two years spamming spammers back – Medium. I created a bot to respond to these types of emails… Sarah: My husband dead two years ago and the family members wants to kill me and my children and seat on the inheritance he left for us with bank here l am now in a hiding with my kids and the documents of inheritance is with us… 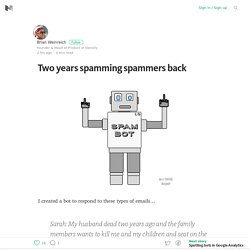 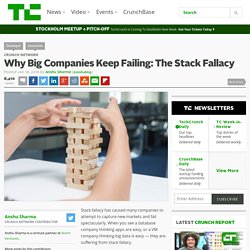 When you see a database company thinking apps are easy, or a VM company thinking big data is easy — they are suffering from stack fallacy. Stack fallacy is the mistaken belief that it is trivial to build the layer above yours. Comic credit: XKCD Mathematicians often believe we can describe the entire natural world in mathematical terms. Hence, all of physics is just applied math. Stack fallacy — “just an app” In the business world, we have a similar illusion. As history has shown, Amazon is dominating the cloud IaaS market, even as the technology vendors that build ingredient, lower-layer technologies struggle to compete — VMware is nowhere close to winning against AWS, even though all of AWS runs on virtual machine technology, a core competency of VMware; Oracle has been unable to beat Salesforce in CRM SaaS, despite the fact that Oracle perceives Salesforce to be just a hosted database app.

The waterless toilet that turns your poo into power. Human excrement is rife with pathogens, “odorant volatiles” (the chemicals that make it smell) and parasites, but it has something going for it: it’s about 75% water. 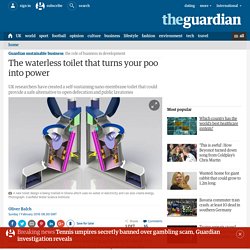 What’s more, water is the smallest of all its component molecules. It’s these qualities of our faecal matter that got researchers at Cranfield Water Science Institute thinking about how to make a new kind of toilet that can provide safe sanitation to the 2.5 billion people around the world who do not currently have it. This Ingenious Machine Turns Feces Into Drinking Water. I watched the piles of feces go up the conveyer belt and drop into a large bin. 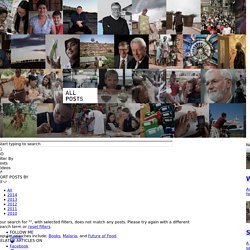 They made their way through the machine, getting boiled and treated. A few minutes later I took a long taste of the end result: a glass of delicious drinking water.

Management. The World’s Email Encryption Software Relies on One Guy, Who is Going Broke. Update, Feb. 5, 2015, 8:10 p.m.: After this article appeared, Werner Koch informed us that last week he was awarded a one-time grant of $60,000 from Linux Foundation's Core Infrastructure Initiative. 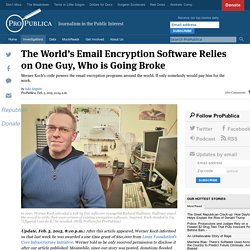 Werner told us he only received permission to disclose it after our article published. Meanwhile, since our story was posted, donations flooded Werner's website donation page and he reached his funding goal of $137,000. In addition, Facebook and the online payment processor Stripe each pledged to donate $50,000 a year to Koch’s project. The man who built the free email encryption software used by whistleblower Edward Snowden, as well as hundreds of thousands of journalists, dissidents and security-minded people around the world, is running out of money to keep his project alive.

Werner Koch wrote the software, known as Gnu Privacy Guard, in 1997, and since then has been almost single-handedly keeping it alive with patches and updates from his home in Erkrath, Germany.

What are some startups working on big problems in the developing world? Check out Jana Care. 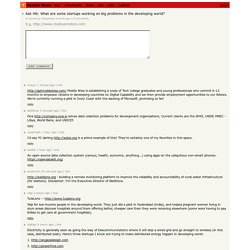 The company is building a mobile based care platform for patients with diabetes or at risk of diabetes along with a Square equivalent device for diagnostics. While cost is one of the issue for patients, it is not the only one. Quality of care varies significantly across a city and the moment you step outside a major city, there is little to no specialized care for chronic conditions that need some form of training for managing the condition. A mobile phone with some form of internet connectivity is ubiquitous these days. So leveraging that to reach as many people as possible makes sense. The problem isn't India specific. Java Tools and Technologies Landscape for 2014. A quick note This survey rocked. 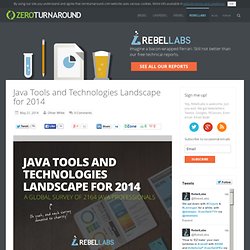 A better-than-ever response rate, and each completed survey donated cash to charity. We love doing this. Did you know that this is the 5th anniversary of ZeroTurnaround’s Java development research reports? Break out the champagne! It actually started in 2009 with a survey about the speed of Java application server restarts, evolving over the years into a deeper look at the industry layout in our first research publication in 2012. But now we feel like it’s time to revisit the broader tools & technologies landscape in Java these days, collect some data, crunch some numbers and see what’s going on in the market at large.