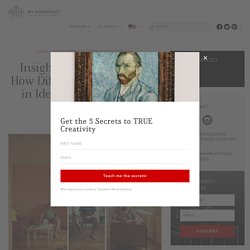 He currently lives on the 10th floor of a Bucharest apartment building, which was built in 1966 during communist times. To create widespread equality, many of these plain lodgings were constructed with identical apartments to prevent any individualistic forms of expression. In an e-mail, Grbovan describes them to us as “mere boxes” that don't allow for social, cultural, or communicational happenings. Residents can only fulfill their basic needs in these single-room spaces that, according to the artist, “have absolutely no sense of beauty.”

After looking around at his own apartment, the photographer wondered how those living below him inhabited their nine identical places. Scroll down to take a peek into these apartments, in descending order, and the residents who have made the identical rooms their personal homes. 10th Floor Apartment #52. 9th Floor Apartment #47. 8th Floor Apartment #42. 7th Floor. Breathtaking Photos of Farmers Harvesting Lilies from the Mekong Delta. Each autumn, Vietnam's Mekong Delta is filled with beautiful, long-stemmed lilies that are the result of flooding that nourishes the waterway. 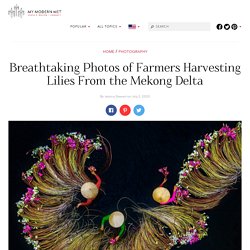 From early-September to mid-November, farmers in the Long An province spend their days harvesting these delicate flowers. It's an incredible spectacle to see and, luckily, photographer Trung Huy Pham used his skill to capture stunning aerial photographs of the scene. Braving intense heat and high waters, Pham came away with a beautiful array of images. In many, the dark waters offer a pleasing contrast to the colorful blossoms and the traditional conical hats worn by the farmers. The majority of the lilies are a deep pink hue or white. Though the water lily harvest draws many travelers and photographers who delight in taking in the scene, the harvest is all in a day's work for these farmers.

Pham hopes that his photographs will bring new appreciation to this rich tradition and show people the beauty of hard work. Related Articles: Photographic Stories of Aging and Loss in Siberia by Oded Wagenstein. A young Nenets woman gathers the reindeer before migration. 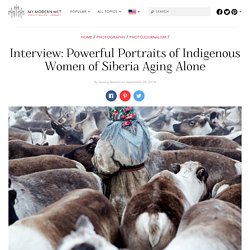 Yamal Peninsula, Siberia, Russia. Photographer Oded Wagenstein is a storyteller at heart. Using his camera, Wagenstein travels the world, exploring themes of aging, loss, and memory. By mixing his background of anthropology, sociology, and film, he shines a vital spotlight on communities that are often forgotten, and dedicates his artistry to giving a visual voice to those who may go unheard. His recent series Forgotten Like Last Year's Snow, focuses on the women of northern Siberia's nomadic communities. Through his photographs, Wagenstein documents this shift. The “Chum” – home of the Nenets. Can you share your relationship with photography and how you began your career? But it was from a very young age that I understood the power of art and photography, the power to explore myself and the world around me, my dreams and fears and to be able to share those with others. Necla Audi (Born 1928). Liliya Yamkina (Born 1944).

Liliya. 100 Honest Pictures Of Russia You'll Never See On Postcards By Street Photographer Aleksandr Petrosyan (New Pics) Winston Churchill once said that "Russia is a riddle wrapped in a mystery inside an enigma. 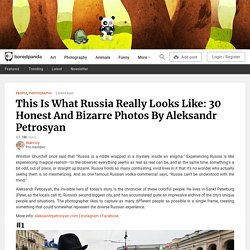 " Experiencing Russia is like experiencing magical realism—to the observer, everything seems as real as real can be, and at the same time, something's a bit odd, out of place, or straight up bizarre. Russia holds so many contrasting, vivid lives in it that it's no wonder why actually seeing them is so mesmerizing. And as one famous Russian vodka commercial says, "Russia can't be understood with the mind. " Aleksandr Petrosyan, the invisible hero of today's story, is the chronicler of these colorful people. He lives in Sankt Peterburg (Peter, as the locals call it), Russia's second-biggest city, and has accumulated quite an impressive archive of the city's unique people and situations. More info: aleksandrpetrosyan.com | Instagram | Facebook Winston Churchill once said that "Russia is a riddle wrapped in a mystery inside an enigma. " 30 Photos Of Tiny, Cramped "Goshitels" Taken By South Korean Photographer Sim Kyu-Dong.

Artists and their Bohemian Ateliers. Man Takes a Polaroid Photo Every Day for 18 Years Until the Day He Dies. Award-Winning Photojournalist Disappears In China, And Here Are 21 Of His Pics China Don’t Want You To See.