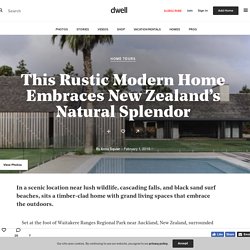 Designed by New Zealand–based Fearon Hay Architects, the Forest House blends modern and rustic architecture into a single-family residence suitable for resting, working, and enjoying the rich outdoors. Steel & Glass House by Donald Wexler. In 2000, Donald Wexler came out of retirement to design a house for his friend Marc Sanders, but Sanders was unable to get the design built at that time in accordance with city requirements. 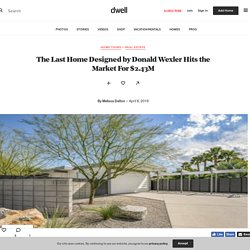 Per the Desert Sun, it wasn’t until 2014 that Sanders found a different lot to build on and started the process again. Wexler and local architect Lance O’Donnell agreed to update the original plans to meet code and suit the new site. The "Steel & Glass" home was finalized just two months before Wexler’s passing, making it the last home the famed architect participated in building. Kettal brings back the VDL penthouse, a masterpiece by richard neutra. House in Toyonaka embeds windows between monolithic grey boxes. Fran silvestre arquitectos roots 'coimbra-steinman house' in surrounding topography. La Casa Pequena Modern Home in Oaxaca, Oaxaca, Mexico by Aránzazu De… on Dwell. 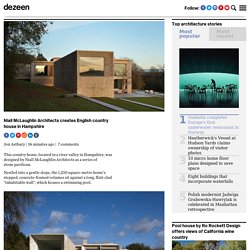 Nestled into a gentle slope, the 1,250 square-metre home's stepped, concrete-framed volumes sit against a long, flint-clad "inhabitable wall", which houses a swimming pool. "The contrast of a load bearing, heavy, sheltering wall and framed, openable pavilions set sup a sense of difference that reflects the ned to screen the site from the north and open it towards the south and west," Niall McLaughlin, founder of Niall McLaughlin Architects, told Dezeen. Foreign Bear Studio completes Glass House in Dublin. Expansive corner windows and skylights appear throughout this Georgian townhouse in Dublin, which Foreign Bear Studio has renovated and extended to create light-filled living spaces. 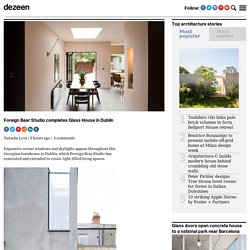 The property is situated in the neighbourhood of Glasnevin and has been overhauled to feature a number of large windows, lending it the name of Glass House. Previously host to four separate studio flats, the home had fallen into a state of disrepair after years of letting. East London-based Foreign Bear Studio renovated the house, adding a generous kitchen, bathroom, and guest bedroom for it's new owners – a couple with a young son. "The house needed to have a sense of character and depth reinstated through the design process.

Ideas began to percolate of how to ensure each corner was considered and attended to," explained the studio. An extension comprised of two adjoining rectilinear volumes has been added to the back of the property to accommodate these living spaces. For Sale: Byrdview by William Pereira, Frank Sinatra's Midcentury Home. Fans of Frank Sinatra may be familiar with this William Pereira-designed midcentury estate, known as Byrdview, one of the the classic crooner’s homes during the 1950s and '60s. 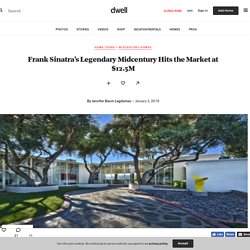 Built in 1949, Byrdview is one of four residential homes designed by the famed midcentury architect, known for his futuristic designs that include the Transamerica Pyramid in San Francisco. Arquitectura-G builds modern house behind crumbling old stone walls. Architecture office Arquitectura-G has slotted a new house within the aged stone walls of a ruin in the medieval village of Palau-Sator, Spain. 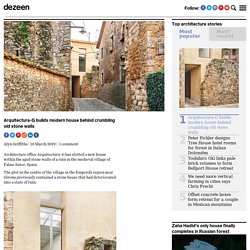 The plot in the centre of the village in the Empordà region near Girona previously contained a stone house that had deteriorated into a state of ruin. Barcelona-based office Arquitectura-G revived the site while respecting its sensitive historic context. The new building, called Single Family House, is erected inside the existing walls, which were preserved as they were found. Palo Alto Eichler Remodel by Klopf Architecture. When a couple purchased a dark and dated Eichler in the heart of Silicon Valley, they saw potential—but they knew that a complete overhaul would be needed to make the space work for them. 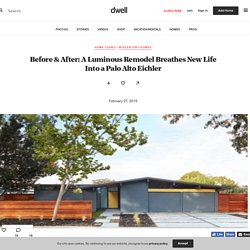 The circa-1958 home was loaded with charming original details, but starved of natural light and chopped up in a way that limited function. Before: The Exterior Newsletter Join the Renovations Newsletter Modern renovations can give new life to midcentury gems, old industrial buildings, and other outdated spaces. Hyde Park House by Studio MM. When an active family of four in Tampa’s historic Hyde Park outgrew their bungalow, they opted to expand their existing residence instead of sacrificing the neighborhood they loved. 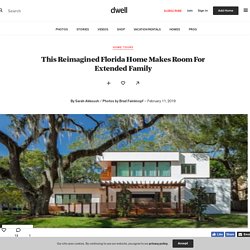 The single-level abode, just under 2,000 square feet, had been home for five years, and the family knew it was finally time to put remodel plans into motion. Newsletter Join the Daily Dose Newsletter Get carefully curated content filled with inspiring homes from around the world, innovative new products, and the best in modern design The clients, a professional couple with two young kids, engaged Studio MM to reimagine their home. Because the home was classified as historically "non-contributing" by the city, the team was, indeed, allowed to raze the property and start fresh. 1413 House By Harquitectes. Grab This Cozy, Updated Midcentury Home in Joshua Tree For $379K. 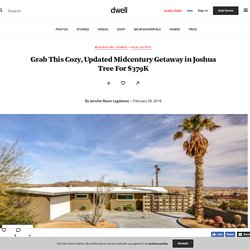 Surrounded by native landscaping, the 1,307-square-foot house is defined by a simple, yet distinctive brise-soleil which shades the patio and a portion of the living space from the strong desert sun. Newsletter Join the Daily Dose Newsletter Get carefully curated content filled with inspiring homes from around the world, innovative new products, and the best in modern design. TAAB6 completes Casa JJA townhouse renovation in Barcelona. 30 Terrible Pictures Taken By Real Estate Agents. Kvarnhuset Mill House by Gert Wingårdh. A 19th-century farmhouse on Sweden's Bjäre peninsula has been reborn as an incredible vacation home—and the highlight is undoubtedly this 538-square-foot dwelling. 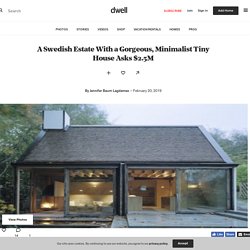 Known as Kvarnhuset, or the Mill House, the charming little annex was thoughtfully designed by Swedish architect Gert Wingårdh to serve as a peaceful refuge—a getaway from your getaway—or a private guest house for visiting friends or family. Newsletter Join the Tiny Homes Newsletter These tiny homes are filled with big ideas. From clever storage solutions to rooms that shape-shift to accomidate your every need, these stories show that you don't have to live large to have fun. The warm and cozy annex is crafted from beautiful materials such as solid oak and Öland limestone.

Stoned by ElasticoSPA. Located in the historic center of San Quirino, Italy, Stoned is a single-family home with an attached guest house designed by architect Stefano Pujatti, founder of ElasticoSPA. Pujatti outfitted the guest house with surprising "stone curtains" that add a beautiful textural layer while shielding the project from the sun and helping it comply with the city's strict building code. Newsletter Join the Daily Dose Newsletter Get carefully curated content filled with inspiring homes from around the world, innovative new products, and the best in modern design.

Situated on a elongated island plot next to the lake, the home was designed with an inside-out strategy to make the most out of the limited square footage. Emilio lópez uses local wood to create don juan house in ecuador. Nanometer architecture wraps japanese seaside villa in corrugated polycarbonate panels. Nanometer architecture has renovated a seaside villa located on a beach in japan‘s aichi prefecture. as a solution to the strong sea breezes which hit the residence’s walls and blew sand inside its spaces, the japanese architects have transformed the garage hut of the house into a barrier that shelters both the interior and the garden. images courtesy of nanometer architecture nanometer architecture has wrapped the garage hut in a frost-type, polycarbonate corrugated panel, which extends towards the villa’s ground level outer walls and parts of the ceiling inside. now protected from strong winds and sand, the garden functions as an extension of the interior spaces, connected via a large circulation route that runs through the newly created, semi-outdoor kitchen/living room. the villa’s exterior is mainly clad in a combination of the polycarbonate material with black brickwork, which continues within its interior spaces, mixed together with wood and raw concrete.

Sliding glass doors open on to a green stone pool in Israeli house. Dezeen promotion: Sliding and pivoting glazed doors and windows by Vitrocsa create an unbroken connection between architecture and landscape in this house in Israel. Tel Aviv-based architects Eran Binderman and Rama Dotan designed B House for a family of six who wanted to incorporate design elements they loved from their travels in Asia. The front facade is made from brushed sandstone decorated with vertical strips of brass, set back from the street by a raised pool and screened with trees and plants.

The entrance is reached via a stepping stone-style pathway made of offset slabs. In the garden to the rear, the large swimming pool is lined with a bright "tropical" green stone. Seattle Granny Pad by Best Practice provides living space in garage. This house in indonesia turns doors into tables and windows. Alejandro aravena's 'primitive' concrete home hides interiors of subtle luxury. Wooden split house in chile features separate volumes for kids and adults.

Vardehaugen's nerskogen cabin in norway is defined by three fireplaces. Cabin nerskogen by oslo-based studio vardehaugen rests on a sloping terrain in the alpine landscape of trollheimen, central norway. the mountain residence is clad in carbonized wood, concrete, and floor-to-ceiling glass windows, while it is primarily defined by three separate fireplaces on the edges of its star-shaped plan, each connected to a concrete gable. all images courtesy of vardehaugen due to the strict building regulations of the area, vardehaugen has reworked norway’s old fashioned cabin style into its modern version, created in close collaboration with local carpenters. extending towards three different directions, the 120 sqm structure encloses two bedrooms on one wing, a living room and dining room on another, and a master bedroom on the third. three fireplaces are placed at the edge of each extending wing, while additional facilities include a sauna, bathrooms, and a ski preparation room. project info: name: nerskogen cabin architect: vardehaugen.

Mexican architects fernanda canales and claudia rodríguez have collaborated on casa bruma, a house that combines nine black-concrete blocks built around a large patio. located in valle de bravo, mexico, the 600 sq.m structure adapts to the topography of its landscape, where each volume is designed with a different height to allow it to appear and disappear between the surrounding slopes. all photos © rafael gamo. Dezeen. Dezeen. The roof of this concrete house, by Felipe Assadi Arquitectos, doubles as a lookout point for residents to take in views of Chile's coastline. Casa Cipolla is a single-storey, rectangular home that is nestled into a sloping site in Ensenada, beside the Pacific Ocean.