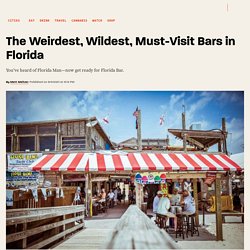 Make all the jokes you want about Florida, but one thing we do better than any other state is pure, unadulterated fun. Where else can you watch alligator wrestling in the morning, ride the Incredible Hulk coaster in the afternoon, and finish the day with a walk on the beach and probably more alligator wrestling? La-ventana. Al-Amir Addison – More than dinner, it's an experience.

Annoying Things Customers Do That Waiters Hate The Most. Mexican Appetizers in Texas. Looking for a restaurant for a casual meetup with out-of-town guests? 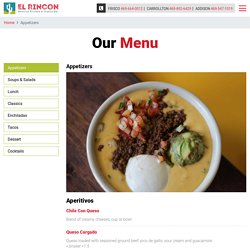 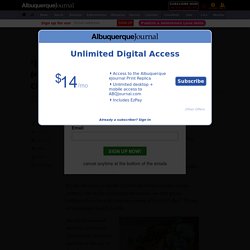 Coffee, the Oregon-based drive-through coffee chain, auspicious is an understatement. Lines of cars regularly snake around the building, sometimes extending out onto a busy stretch of Juan Tabo. While it’s encouraging to see people supporting a new business, I can’t help but think that all that money would be better served going to homegrown operations. It’s not like there’s a dearth of good coffee shops in town. On the contrary, the city has a thriving coffee scene, one that got an additional boost recently with the opening of Meraki Coffee + Market at Eubank and Juan Tabo NE. ‘Labor of love’: Newly opened Meraki offers superb coffee, cocktails, Greek treats. Hotel Restaurants Are Using Empty Rooms as Private Dining Suites. ThereThere are few restaurants Hector Tamez frequents more than Uni, the izakaya located in Boston’s boutique Eliot Hotel. 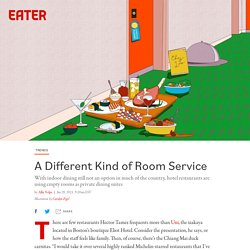 Consider the presentation, he says, or how the staff feels like family. Then, of course, there’s the Chiang Mai duck carnitas. “I would take it over several highly ranked Michelin-starred restaurants that I’ve been to any day,” Tamez says. Chinese Restaurant Owner Adds Funny And Honest Comments On The Menu, And People Are Here For It. I don’t know about you but when I walk into a new restaurant, I usually have a hard time choosing a dish—the ingredient list in the menu says nothing about how good the chef is. 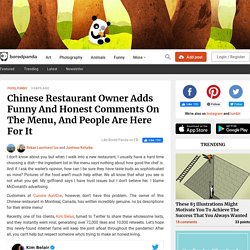 And if I ask the waiter’s opinion, how can I be sure they have taste buds as sophisticated as mine? Pictures of the food aren’t much help either. We all know that what you see is not what you get. My girlfriend says I have trust issues but I don’t believe her. 7 Unique, Unfussy Restaurants & Bars In Paris - Journy-Home. The stereotypical caricature of Parisian dining goes something like this: white tablecloths dotting an elegant (read: stuffy) dining room, pencil-thin waiters clad in sleek-fitting vests, and refined dishes that skew heavy on the butter. 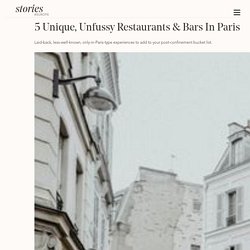 It's a cuisine that steeped in tradition. It's desirable and iconic. A convenient image that stands up to the certain je ne sais quoi that has people all around the world swooning for La Ville Lumière. And yet, to hold on to this image is to ignore the endearingly laid-back side of Paris that's taking shape today. To-Go Cocktails Could Become Permanent in Texas Beyond COVID-19. Alcoholic beverages to go could become a permanent thing in Texas, thanks to recently introduced legislation. 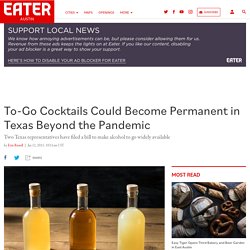 Takeout and delivery alcoholic beverages — mixed cocktails, beer, and wine — are currently allowed via an emergency measure filed in July by Texas Gov. Greg Abbott, as a way to create extra revenue for bars and restaurants during the COVID-19 pandemic. Sen. Kelly Hancock, R-North Richland Hills, and Rep. Charlie Green, R-Fort Worth, have filed the two bills — SB 298 in the Senate and HB 1094 in the House of Representatives — which would make those emergency measures permanent. The bill would allow restaurants with mixed beverage permits and food and beverage certificates from TABC to sell beer, wine, and cocktails for pickup or delivery beyond the pandemic, including through third-party delivery companies. Closure of iconic Cliff House ends a remarkable era of San Francisco's history. At the place where San Francisco drops into the ocean, a door is shutting on a vibrant chapter of the city’s history. 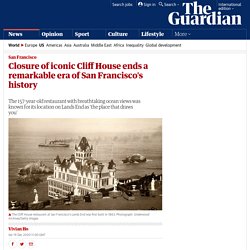 The longtime proprietors of the Cliff House, a 157-year-old iconic San Francisco restaurant with breathtaking ocean views once enjoyed by Mark Twain, announced this week that they would be forced to close by the end of the year. They cited both coronavirus restrictions and their landlord, the federal government, stalling on a long-term lease, as factors in their decision.

The Cliff House was not the first of the city’s beloved restaurants to close. In fact, it follows their neighbor, Louis’ Restaurant, the only other independent restaurant remaining on that oceanfront stretch of road, in shuttering for good during the pandemic. “When Louis’ closed, I just read story after story, memory after memory, of people who came to our restaurant and loved our restaurant and loved the area,” said Tom Hontalas, the owner of Louis’, which opened by his grandparents in 1937. 30 People Who Got Some Of The Most Ridiculous Food Servings In The Restaurant Business (New Pics) Over the following months the picnic benches became increasingly popular, coinciding with the specials board becoming progressively smaller, before it eventually disappeared altogether. 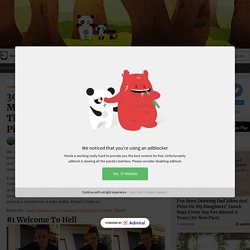 "I sat there one Sunday, watching bench after garish bench emerge from the kitchen like a technicolor carnival of idiocy, before my usual roast arrived. The meat was cold and the potatoes were burnt. It was once their main Sunday trade, but the traditional roast had died an unpalatable death. Joe Namath's Love Street in Jupiter: a food, drinks restaurant guide. Facing the Jupiter Lighthouse, the waterfront project called Charlie and Joe’s includes three restaurants and one seafood market. 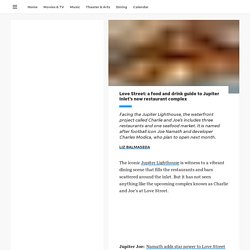 It is named after football icon Joe Namath and developer Charles Modica, who plan to open next month. The iconic Jupiter Lighthouse is witness to a vibrant dining scene that fills the restaurants and bars scattered around the inlet. But it has not seen anything like the upcoming complex known as Charlie and Joe’s at Love Street. Jupiter Joe: Namath adds star power to Love Street in Jupiter. Dine - Harwood District District. Our Story — Harwood Arms. The Best Restaurants in St. Petersburg–Clearwater. From a seafood spot with a famous grouper sandwich to a taco joint and museum café, here’s where to eat in the Sunshine City. share this article.

Casamento's Restaurant in New Orleans. Meet your friends or bring your family for lunch, dinner or brunch on the weekend to one of the most popular restaurants in Allen, TX here at Kelly’s At The Village. Spanish connection: Vara offers wines, tapas, paella for takeout in North Valley. In Vara Winery’s paella, bomba rice hides such goodies as chicken thighs and shellfish. It pairs well with Tempranillo, a fruity red wine. (Richard S. Dargan/For The Journal) Don’t bother looking for vineyards on your approach to Vara Winery & Distillery in the North Valley. Unlike local wineries such as Casa Rondeña and Gruet, Vara doesn’t generally grow its grapes in New Mexico. It’s a journey that symbolically echoes that of New Mexico’s first vintners, Spanish monks who took cuttings from their native country and planted them in the Rio Grande Valley more than 400 years ago. Vara is a collaboration between former wine distributor Doug Diefenthaler and Xavier Zamarripa, an artist whose first attempt to launch a winery failed due to opposition from his North Valley neighbors.

Astoria Caffe Wine Bar - Addison Circle Cafe in Addison, TX. Far East fusion: Raw & Sauce puts a New Mexico spin on Asian favorites. The Barelas rolls are a twist on California rolls in which the sushi is wrapped in sleeves of green chile and served with red chile aioli at Raw Sauce. (Richard S. Dargan/For the Journal) Even on a Saturday night, the scene behind 6910 Montgomery NE, a small complex of restaurants near Louisiana, is as forlorn as an Edward Hopper painting. When food trucks take root. Yuko Kawashiwo and her husband, Nobutoshi “Nobu” Mizushima, are co-owners of Ihatov Bread & Coffee, which will soon open a storefront in the old Starbucks building on Central in Nob Hill. (Jim Thompson/Albuquerque Journal) Copyright © 2020 Albuquerque Journal Food trucks have become a common sight around Albuquerque in the past decade, popping up everywhere from breweries to city parks. #48 Carbone (New York, New York) from The Best Italian Restaurants in America.

D Magazine Directories. Hudson House. Restaurant Etiquette: How to Dine Out Like a Gentleman. Going out to eat is a popular activity for many people–but it can present a number of etiquette issues! Gather Coffee Cafe Cuvee. This Is The Best Steakhouse in America. To assemble our ranking of the best steakhouses in America, we started by compiling a list of more than 200 of America’s leading steakhouses. We then judged them according to strict criteria: Is the meat sourced reputably and USDA Choice or Prime? A New Bar From Double Wide's Owner Rethinks a 62-Year-Old Gas Station. FINE COFFEE AND STUFF. Home - Fine Southern Cuisine - Ida Claire. The Best Dallas Breakfasts by Neighborhood. Breakfast can be casual. Ferrari's Italian Villa. Andiamo Italian Grill Addison. La Spiga Bakery - Addison, Texas. Offering A Wonderful Mix Of Breakfast, Lunch And Brunch For Our Customers.

Addison, TX. Dual temptation: Two Cranes offers delightful blend of healthful, sinful. Why Daniel Humm and Will Guidara’s Eleven Madison Park Split Is Such a Big Deal. InIn the summer of 2009, the stage was set for a complete disruption of the New York fine dining hierarchy. Wurstkuchl (Sausage Kitchen) – Regensburg, Germany. Waveasianbistro. The Best Old-School and Classic Restaurants in America. Every city has its classic restaurants, those which have stood the test of time over the years. These destinations tend to have a loyal customer fan-base, the flexibility to withstand changing times, and naturally, food worth coming back for. These maps of classic restaurants across Eater Cities feature places ranging from upscale steakhouses to no-nonsense takeout spots. This lineup includes everything from La Grenouille in New York City, the opulent French restaurant that serves frog legs and caviar, to the Loveless Cafe in Nashville, a burger joint along Highway 100 that’s famous for its buttermilk biscuits.

Each of these dining establishments holds a special place in its city’s history and culture, allowing its success to persist as the decades go by. Louis’ Lunch (New Haven, Connecticut) from 50 Restaurants That Are Actually Worth Waiting in Line For. S&D Oyster Company. Listening Bars in Tokyo, LA, and NY Have Interior Design Worth Stealing. A taste of tradition: Molino de Flores offers classic Mexican dishes.