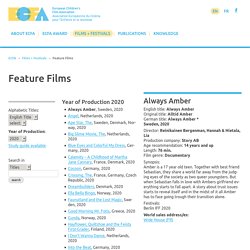 Together with best friend Sebastian, they share a world far away from the judging eyes of the society as two queer youngsters. But when Sebastian falls in love with Ambers girlfriend everything starts to fall apart. The Realm of the Vikings. The Secret of Kells (2010) Ep. 1: Joseph Campbell and the Power of Myth. Bill Moyers and mythologist Joseph Campbell begin their groundbreaking and timeless conversation with an exploration of the classic hero cycle, including consistent and enduring hero patterns in literature, real life and even the Star Wars films. 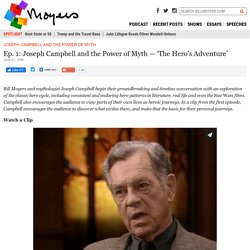 Campbell also encourages the audience to view parts of their own lives as heroic journeys. In a clip from the first episode, Campbell encourages the audience to discover what excites them, and make that the basis for their personal journeys. Watch a Clip. In Conversation with Tomm Moore (part 2) - AFA: Animation For Adults. Continuing our interview with Song Of The Sea director Tomm Moore. 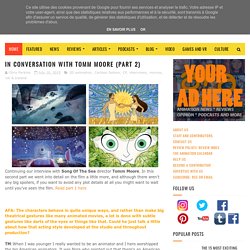 In this second part we went into detail on the film a little more, and although there aren't any big spoilers, if you want to avoid any plot details at all you might want to wait until you've seen the film. Read part 1 here AFA: The characters behave in quite unique ways, and rather than make big theatrical gestures like many animated movies, a lot is done with subtle gestures like darts of the eyes or things like that.

Could he just talk a little about how that acting style developed at the studio and throughout production? More Artwork Surfaces From Tomm Moore's 'Wolfwalkers' - AFA: Animation For Adults. 2017 is the year in which Cartoon Saloon's next eagerly awaited film The Breadwinner is expected to arrive on cinema screens. 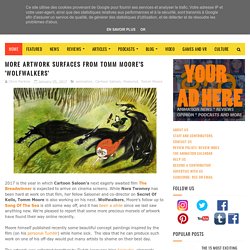 While Nora Twomey has been hard at work on that film, her fellow Salooner and co-director on Secret Of Kells,Tomm Moore is also working on his next. Wolfwalkers, Moore's follow up to Song Of The Sea is still some way off, and it has been a while since we last saw anything new. We're pleased to report that some more precious morsels of artwork have found their way online recently. The real Lord of the Flies: what happened when six boys were shipwrecked for 15 months. For centuries western culture has been permeated by the idea that humans are selfish creatures. 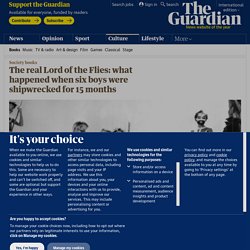 That cynical image of humanity has been proclaimed in films and novels, history books and scientific research. But in the last 20 years, something extraordinary has happened. Scientists from all over the world have switched to a more hopeful view of mankind. This development is still so young that researchers in different fields often don’t even know about each other.

When I started writing a book about this more hopeful view, I knew there was one story I would have to address. 40 Days to Learn Film. 40 Days to Learn Film. The Immersive Realism of Studio Ghibli. The Immersive Realism of Studio Ghibli. BBFC Podcast. The Cold War in the Cinema: The Boom in Spy Films in the 1960s, its Causes and Implications. The remarkable history of the spy genre from the late 19th century onwards, is due to two closely linked developments: the involvement of increasing numbers of ordinary people in the political process, on the one hand, and the growth of popular mass media on the other. 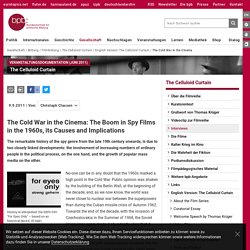 History re-interpreted: the DEFA film "For Eyes Only" – based on an historical deceit. (© bpb) Brooklyn: Film Guide. Sacred Trees of the Celts and Druids. Introduction by Ed Collins To the Celts, Druids and many other peoples of the old world, certain trees held special significance as a fuel for heat, cooking, building materials and weaponry. 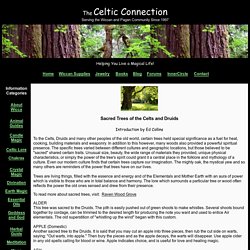 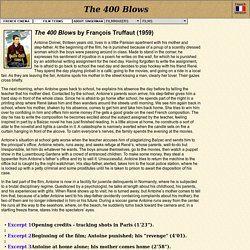 At the beginning of the film, he is punished because of a pinup of a scantily dressed woman which the boys were passing around in class. Made to stand in the corner, he expresses his sentiment of injustice in a poem he writes on the wall, for which he is punished by an additional writing assignment for the next day. Having forgotten to write the assignment, he is afraid to go back to school the next day and decides to play hookey with his friend René. They spend the day playing pinball in a café, going to the movies, and going on a ride in a local fair. French Cinema: The 400 Blows. The Secret of Kells. Places and Stories Examples. 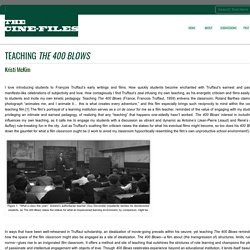 How quickly students become enchanted with Truffaut’s earnest and passionate manifesto-like celebrations of subjectivity and love. How contagiously I find Truffaut’s zeal infusing my own teaching, as his energetic criticism and films easily appeal to students and incite my own kinetic pedagogy. Teaching The 400 Blows (France, Francois Truffaut, 1959) enlivens the classroom; Roland Barthes claims that a photograph “animates me, and I animate it… this is what creates every adventure,” and this film especially brings such reciprocity to mind within the context of teaching film.[1] The film’s portrayal of a learning institution serves as a cri de coeur for me as a film teacher, reminded of the value of engaging with my students, of privileging an intimate and earnest pedagogy, of realizing that any “teaching” that happens one-sidedly hasn’t worked.

Figure 1: “What a class this year! Notes [9] Phillips, 560. Visual Glossary. Visual Glossary. The 400 Blows Characters. Antoine is a young boy who struggles to deal with authority and to be understood by his parents. 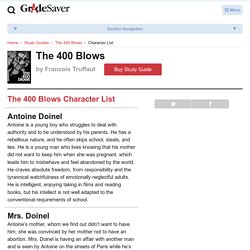 He has a rebellious nature, and he often skips school, steals, and lies. He is a young man who lives knowing that his mother did not want to keep him when she was pregnant, which leads him to misbehave and feel abandoned by the world. He craves absolute freedom, from responsibility and the tyrannical watchfulness of emotionally neglectful adults. He is intelligent, enjoying taking in films and reading books, but his intellect is not well adapted to the conventional requirements of school.

Antoine’s mother, whom we find out didn’t want to have him; she was convinced by her mother not to have an abortion. Mr. René is Antoine’s best friend. Essential Films: The 400 Blows (1959) The 400 Blows - François Truffaut - Movies. This sort of ending wasn’t common in 1959, and viewers were impressed. Mr. Truffaut, overcoming the considerable ill will he had earned as a Cahiers critic, won the prize for best director at Cannes; the movie was a hit in France and all over the world.

That freeze-frame stuck in people’s minds as if it were a sharp, nagging memory of their own. What looks most remarkable now, though, isn’t the blank still face that closes the film, but the daringly long run that brings us to it, that allows our emotions to gather and build with each short, stiff step until, without quite understanding why, we end up overwhelmed.