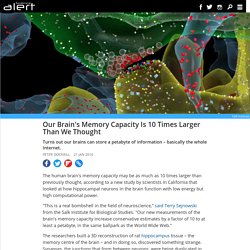 "This is a real bombshell in the field of neuroscience," said Terry Sejnowski from the Salk Institute for Biological Studies. "Our new measurements of the brain's memory capacity increase conservative estimates by a factor of 10 to at least a petabyte, in the same ballpark as the World Wide Web. " The researchers built a 3D reconstruction of rat hippocampus tissue – the memory centre of the brain – and in doing so, discovered something strange. Synapses, the junctions that form between neurons, were being duplicated in about 10 percent of cases. Your brain is trying to show you the future - and it might save your life. Our brains are pretty good at filling in the blanks when it comes to our sense of perception - often to the point we have a mental movie of an entire event before it even finishes unfolding. 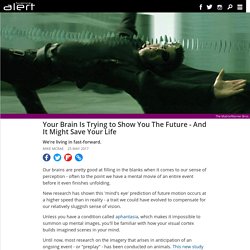 New research has shown this 'mind's eye' prediction of future motion occurs at a higher speed than in reality - a trait we could have evolved to compensate for our relatively sluggish sense of vision. Unless you have a condition called aphantasia, which makes it impossible to summon up mental images, you'll be familiar with how your visual cortex builds imagined scenes in your mind. Until now, most research on the imagery that arises in anticipation of an ongoing event - or "preplay" - has been conducted on animals. This new study takes a close look at what's going on in the visual cortex of humans. Participants were asked to watch the same animation repeat 108 times over a number of short sessions. Ekman etal, Nature Communications. How Girls With Anxiety Love Differently. You’re swimming in an ocean, and without notice or warning you begin slipping under the surface. 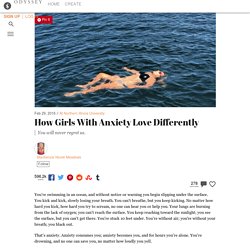 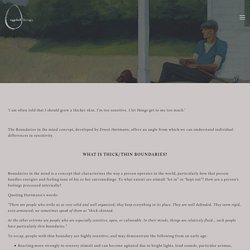 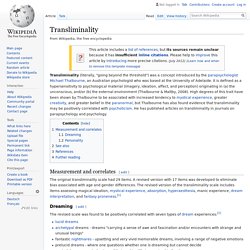 It is defined as a hypersensitivity to psychological material (imagery, ideation, affect, and perception) originating in (a) the unconscious, and/or (b) the external environment (Thalbourne & Maltby, 2008). High degrees of this trait have been shown by Thalbourne to be associated with increased tendency to mystical experience, greater creativity, and greater belief in the paranormal, but Thalbourne has also found evidence that transliminality may be positively correlated with psychoticism. He has published articles on transliminality in journals on parapsychology and psychology. Measurement and correlates[edit] 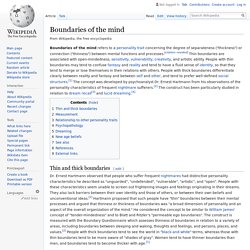 Your Emotional Type: Boundary Concept. Because we are bounded within our bodies, we are enabled to have distinct minds and personalities. 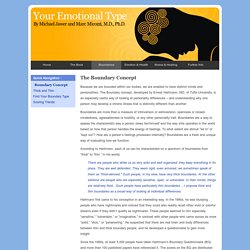 The Boundary concept, developed by Ernest Hartmann, MD, of Tufts University, is an especially useful way of looking at personality differences – and understanding why one person may develop a chronic illness that is distinctly different than another. Boundaries are more than a measure of introversion or extroversion, openness or closed-mindedness, agreeableness or hostility, or any other personality trait. Boundaries are a way to assess the characteristic way a person views her/himself and the way s/he operates in the world based on how that person handles the energy of feelings. 10 Things People Don’t Realize You’re Doing Because You’re Repressing The Hell Out Of Your Feelings. Ah, emotional repression. 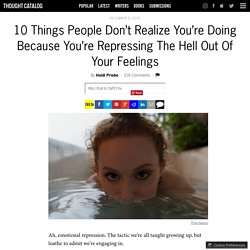 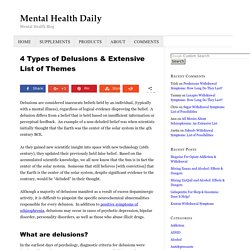 A delusion differs from a belief that is held based on insufficient information or perceptual feedback. An example of a non-deluded belief was when scientists initially thought that the Earth was the center of the solar system in the 4th century BCE. As they gained new scientific insight into space with new technology (16th century), they updated their previously held false belief. Based on the accumulated scientific knowledge, we all now know that the Sun is in fact the center of the solar system. Someone that still believes [with conviction] that the Earth is the center of the solar system, despite significant evidence to the contrary, would be “deluded” in their thought. Dominantlife: lah-disputes: I decided to... Why Stoicism is one of the best mind-hacks ever devised.

11 TED Talks that show how weird the human mind really is. These talks will make you think about thinking.TED. 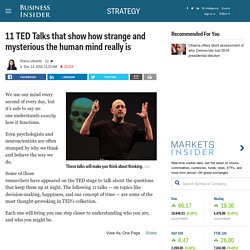 It’s Probably an Appropriate Time to Learn About the Imposter Phenomenon. The feeling that you don’t belong somewhere is common. It can be fleeting, like accidentally boarding a train headed the wrong way. Sometimes, it’s less temporary. Perhaps you’re the only person of color in your office. Why Stoicism is one of the best mind-hacks ever devised. 20 Diversion Tactics Highly Manipulative Narcissists, Sociopaths And Psychopaths Use To Silence You. Toxic people such as malignant narcissists, psychopaths and those with antisocial traits engage in maladaptive behaviors in relationships that ultimately exploit, demean and hurt their intimate partners, family members and friends. They use a plethora of diversionary tactics that distort the reality of their victims and deflect responsibility. Although those who are not narcissistic can employ these tactics as well, abusive narcissists use these to an excessive extent in an effort to escape accountability for their actions.

Here are the 20 diversionary tactics toxic people use to silence and degrade you. Curing Your Anxiety or Depersonalization—How to Defeat Intrusive Thoughts. Proteins, minerals, vitamins, and other substances are essential for a brain to function properly. The chance that your anxiety, or at least part of it, can be traced to a vitamin or mineral deficiency is quite high. Here are some over-the-counter and natural ingredients to help alleviate anxiety. Aniracetam is a nootropic (memory/learning-enhancing) dietary supplement that is immensely useful when your thinking is fogged by anxiety.

Depersonalization often causes brain fog and therefore I found taking a supplement of aniracetam extremely helpful for learning/working. Do not underestimate the power of simple supplements such as B-complex: its deficiency can cause symptoms of mania, psychosis, fatigue, memory impairment, irritability, depression, and personality changes. Choline is an essential nutrient for brain health, intelligence, and synaptic plasticity. GABA is a supplement that is essential in regulating anxiety. Consciousness could be a side effect of 'entropy', say researchers.

It's impressive enough that our human brains are made up of the same 'star stuff' that forms the Universe, but new research suggests that this might not be the only thing the two have in common. Just like the Universe, our brains might be programmed to maximise disorder - similar to the principle of entropy - and our consciousness could simply be a side effect. The quest to understand human consciousness - our ability to be aware of ourselves and our surroundings - has been going on for centuries. Although consciousness is a crucial part of being human, researchers still don't truly understand where it comes from, and why we have it. But a new study, led by researchers from France and Canada, puts forward a new possibility: what if consciousness arises naturally as a result of our brains maximising their information content?

In other words, what if consciousness is a side effect of our brain moving towards a state of entropy? Contrasting and categorization of emotions. The contrasting and categorisation of emotions describes how emotions are thought to relate to each other. Various recent proposals of such groupings are described in the following sections. Contrasting Basic Emotions[edit] The following table,[1] based on a wide review of current theories, identifies and contrasts the fundamental emotions according to a set of definite criteria.

Metacognitive diversity: An interdisciplinary approach. The Archetype of Eranos: Carl Gustav Jung and Western Esotericism. Whether You're Talking or Typing, You Can't Hide Your Lies. The Jung Page - Home. Carl Jung’s Psychology – The Meaning of Dreams and The Importance of Nightmares @ Scientific Dream Interpretation. Ilson Van Dusen: The Presence of Spirits in Madness. The Presence Of Spirits In Madness A Confirmation of Swedenborg in Recent Empirical Findings by Wilson Van Dusen "Reprinted courtesy of the Swedenborg Foundation, N.Y., N.Y. 10010" Multimodal Therapy: A Primer, Article by Arnold Lazarus, Ph.D., ABPP. Introduction. Multimodal Therapy: A Primer, Online CE CEUs for psychologists, MFTs, psychotherapists. Freud (1900) Chapter 7, part a. An internet resource developed by Christopher D.