It turns out this isn’t the only way that our fashion and beauty choices are connected to plastic pollution. A 2011 study found that plastic microfiber from clothing is a major contributor to ocean plastic pollution. A 2011 study might sound like old news, but as Derek Markham at Treehugger points out, “unfortunately, [this issue] doesn’t seem to have gotten any traction in the industry or in the media since then.” That means there’s still work to do. Every time we put our synthetic clothing through the wash, we send around 1900 pieces of plastic microfiber down the drain.

This is an issue that we can’t solve by buying second hand, because so much second hand clothing is made from synthetic fibers, too. So, how can we stop the stream of microfiber into our oceans? Sticking to natural materials is a good place to start. Image Credit: Washing Machine photo via Shutterstock About the Author. Inside the lonely fight against the biggest environmental problem you've never heard of.

Ecologist Mark Browne knew he’d found something big when, after months of tediously examining sediment along shorelines around the world, he noticed something no one had predicted: fibers. Everywhere. They were tiny and synthetic and he was finding them in the greatest concentration near sewage outflows. In other words, they were coming from us. In fact, 85% of the human-made material found on the shoreline were microfibers, and matched the types of material, such as nylon and acrylic, used in clothing. It is not news that microplastic – which the National Oceanic and Atmospheric Administration defines as plastic fragments 5mm or smaller – is ubiquitous in all five major ocean gyres.

But Browne’s 2011 paper announcing his findings marked a milestone, according to Abigail Barrows, an independent marine research scientist based in Stonington, Maine, who has helped to check for plastic in more than 150 one-liter water samples collected around the world. The reaction wasn’t what he expected. Microfiber by Erika Verge on Prezi. Your clothes are polluting the ocean every time you do laundry. An estimated 1,900 microfibers can get rinsed out of a single piece of synthetic clothing each time it's washed, and these microplastic fibers might be the biggest contributors to ocean pollution. 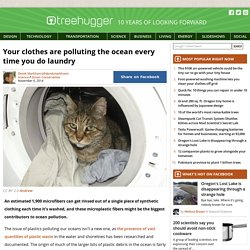 The issue of plastics polluting our oceans isn't a new one, as the presence of vast quantities of plastic waste in the water and shorelines has been researched and documented. The origin of much of the larger bits of plastic debris in the ocean is fairly obvious, at least for those items that are identifiable with the naked eye, but one of the more pervasive ocean pollutants is so small as to be virtually invisible to us.

Dirty Laundry: Scientists Warn of Microfiber Pollution in Great Lakes. Great Lakes struggling with invisible threat of plastic microfibre pollution. Scientists who have reported that the Great Lakes are awash in tiny bits of plastic are raising new alarms about a little-noticed form of the debris turning up in sampling nets: synthetic fibres from garments, cleaning cloths and other consumer products. 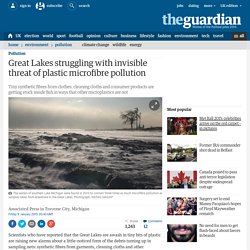 They are known as “microfibres” – exceedingly fine filaments made of petroleum-based materials such as polyester and nylon that are woven together into fabrics. “When we launder our clothes, some of the little microfibres will break off and go down the drain to the wastewater treatment facility and end up in our bodies of water,” Sherri “Sam” Mason, a chemist with the State University of New York at Fredonia, said Friday.

The fibres are so minuscule that people typically don’t realise their favourite pullover fleece can shed thousands of them with every washing, as the journal Environmental Science & Technology reported in 2011. A number of companies are replacing microbeads with natural substances such as ground-up fruit pits. List of Pros and Cons of Microfiber Sheets. Your bed is a place that should give you a good night’s sleep and help you relax. 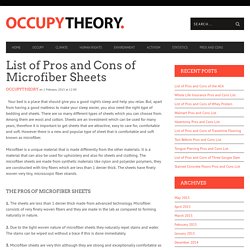 But, apart from having a good mattress to make your sleep easier, you also need the right type of bedding and sheets. There are so many different types of sheets which you can choose from. Among them are wool and cotton. Sheets are an investment which can be used for many years, therefore it is important to get sheets that are attractive, easy to care for, comfortable and soft. Plastic microfiber pollution threatens Great Lakes environment. The Ocean Cleanup, developing technologies to extract, prevent and intercept plastic pollution. 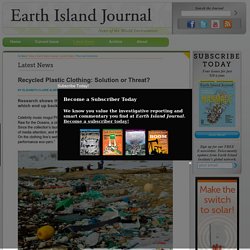 Since the collection’s launch in September 2014, Raw for the Oceans has received a huge amount of media attention, and the clothes have been distributed to G-Star Raw shops around the world. On the clothing line’s website, the makers claim that Pharrell’s collection uses “the world’s first high performance eco-yarn.” Photo by Bo Eide Plastic and other ocean trash on a beach in northern Norway.