Leadership. 10 Characteristics of Superior Leaders - Successful Leader Characteristics. Thousands of articles and books have been published describing what it takes to be a superior organizational leader. 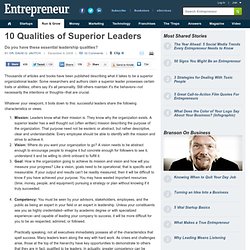 Some researchers and authors claim a superior leader possesses certain traits or abilities; others say it's all personality. Still others maintain it's the behaviors--not necessarily the intentions or thoughts--that are crucial. Whatever your viewpoint, it boils down to this: successful leaders share the following characteristics or views: Mission: Leaders know what their mission is.

12 daily habits of exceptional leaders — Quartz at Work. One of the most popular Dilbert comic strips in the cartoon’s history begins with Dilbert’s boss relaying senior leadership’s explanation for the company’s low profits. In response to his boss, Dilbert asks incredulously, “So they’re saying that profits went up because of great leadership and down because of a weak economy?”

To which Dilbert’s boss replies, “These meetings will go faster if you stop putting things in context.” Great leadership is indeed a difficult thing to pin down and understand. Leadership Self Test: The Difference Between Management and Leadership. Are You A Leader?

Part I: The Leadership Self Testby A. J. Schuler, Psy. D. As today’s organizations become more and more lean, people in business are gaining a greater appreciation for the differences between a manager’s style of thinking and a leader’s style of thinking. When people like Frederick Taylor first began to study management, he used a stopwatch to see how well people on a factory floor could improve their productivity. Now we live in an information age, and no one can “know everything” about a job the way the managers of yesteryear (supposedly) did.

As a result, the role of management in the American workforce has shifted, and today’s managers, more and more, have to develop some leadership skills. If you’re curious about how much you think like a leader versus thinking like a manager, answer the following fifteen True or False questions. Leadership Self Test. Leadership vs. Management. Disciplines > Leadership > Leadership vs. 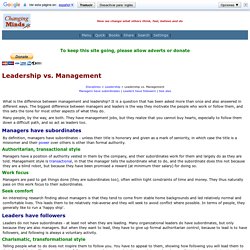 Management Managers have subordinates | Leaders have followers | See also What is the difference between management and leadership? It is a question that has been asked more than once and also answered in different ways. The biggest difference between managers and leaders is the way they motivate the people who work or follow them, and this sets the tone for most other aspects of what they do. Power Causes Brain Damage - The Atlantic. But tornadoes, volcanoes, and tsunamis aren’t the only hubris-restraining forces out there. 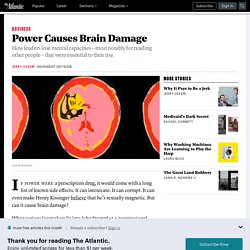 PepsiCo CEO and Chairman Indra Nooyi sometimes tells the story of the day she got the news of her appointment to the company’s board, in 2001. She arrived home percolating in her own sense of importance and vitality, when her mother asked whether, before she delivered her “great news,” she would go out and get some milk. Fuming, Nooyi went out and got it. “Leave that damn crown in the garage” was her mother’s advice when she returned. The point of the story, really, is that Nooyi tells it. For Winston Churchill, the person who filled that role was his wife, Clementine, who had the courage to write, “My Darling Winston. I asked Owen, who admits to a healthy predisposition to hubris himself, whether anything helps keep him tethered to reality, something that other truly powerful figures might emulate. Online Project Management Software & Tools - Projectplace. 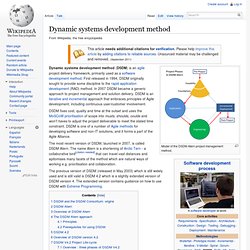 Dynamic systems development method (DSDM) is an agile project delivery framework, primarily used as a software development method. First released in 1994, DSDM originally sought to provide some discipline to the rapid application development (RAD) method. In 2007 DSDM became a generic approach to project management and solution delivery. DSDM is an iterative and incremental approach that embraces principles of Agile development, including continuous user/customer involvement. DSDM fixes cost, quality and time at the outset and uses the MoSCoW prioritisation of scope into musts, shoulds, coulds and won't haves to adjust the project deliverable to meet the stated time constraint. The most recent version of DSDM, launched in 2007, is called DSDM Atern. The previous version of DSDM (released in May 2003) which is still widely used and is still valid is DSDM 4.2 which is a slightly extended version of DSDM version 4.

DSDM Atern[edit] Bloom’s Taxonomy. Background Information | The Original Taxonomy | The Revised Taxonomy | Why Use Bloom’s Taxonomy? | Further Information The above graphic is released under a Creative Commons Attribution license. You’re free to share, reproduce, or otherwise use it, as long as you attribute it to the Vanderbilt University Center for Teaching. For a higher resolution version, visit our Flickr account and look for the “Download this photo” icon. 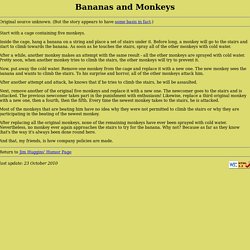 (But the story appears to have some basis in fact.) Start with a cage containing five monkeys. Inside the cage, hang a banana on a string and place a set of stairs under it.