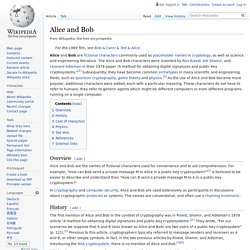 They are used for archetypal characters in fields such as cryptography, game theory and physics.[1] The names are used for convenience; for example, "Alice sends a message to Bob encrypted with his public key" is easier to follow than "Party A sends a message to Party B encrypted by Party B's public key. " Following the alphabet, the specific names have evolved into common parlance within these fields—helping technical topics to be explained in a more understandable fashion.

Theconversation. Helen Garner isn’t usually thought of as a crime writer, but some of her best-known prose has been on law-breaking. 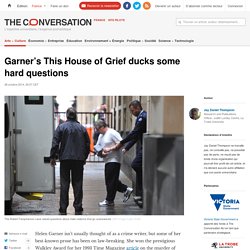 She won the prestigious Walkley Award for her 1993 Time Magazine article on the murder of toddler Daniel Valerio. Then there were her bestsellers The First Stone (1995) and Joe Cinque’s Consolation (2004). How to Write a Book. How to Write a Book You probably know by now that I’ve written a book. 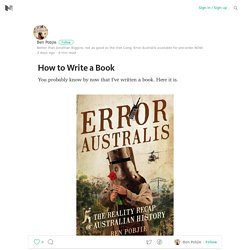 Here it is. Isn’t it lovely? How to build a story out of scraps of ideas. Writing is an art, which means it is mysterious. 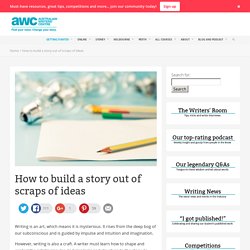 It rises from the deep bog of our subconscious and is guided by impulse and intuition and imagination. However, writing is also a craft. A writer must learn how to shape and control the artistic impulse, to bring logic and structure to the story, to work with discipline and focus. Inspiration is a flash of light, gone in a second. The only way to harness that electricity, and pin it to the page, is with dogged determination. Not Quite Dead: A Writer’s Guide to Serious Injuries and Calamities – Bryn Donovan. Sometimes I want to make it seem like a character might die — but hey, guess what! 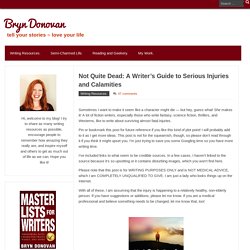 She makes it! A lot of fiction writers, especially those who write fantasy, science fiction, thrillers, and Westerns, like to write about surviving almost fatal injuries. Pin or bookmark this post for future reference if you like this kind of plot point! I will probably add to it as I get more ideas. This post is not for the squeamish, though, so please don’t read through it if you think it might upset you. Five Unique Ways to Market Your First Book.

I gave birth to a book recently. 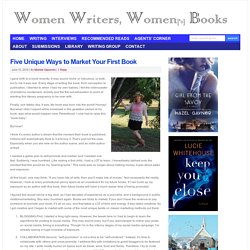 It may sound cliche or ridiculous, or both, but to me it was real. Every stage of writing the book, from conception to publication, I likened to when I had my own babies. I felt the rollercoaster of emotions: excitement, anxiety and the flat out exhaustion to point of wanting this literary pregnancy to be over with. Finally, one fateful day, it was. My book was born into the world! The Science of the Story. Stories are told in the body. 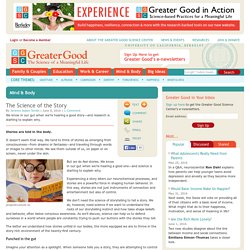 It doesn’t seem that way. We tend to think of stories as emerging from consciousness—from dreams or fantasies—and traveling through words or images to other minds. Books’ Prices and Writing’s Value: Careful What We Asked For? Setting as a Vehicle for Conflict - Elizabeth Spann Craig. By Becca Puglisi, @BeccaPuglisi I’m sure you’ve heard the saying that a good book should have conflict in every scene. 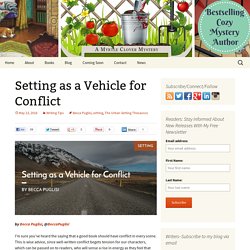 This is wise advice, since well-written conflict begets tension for our characters, which can be passed on to readers, who will sense a rise in energy as they feel that nervous, jittery sensation signaling them that something is going on. We all want readers to have that heightened awareness and interest when they’re reading our stories, and a good way to bring that about is through conflict. How Successful Authors Use Social Media: 23 Content Ideas. How do successful authors engage their fans on social media? 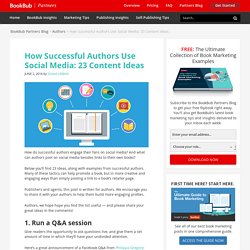 And what can authors post on social media besides links to their own books? Below you’ll find 23 ideas, along with examples from successful authors. Many of these tactics can help promote a book, but in more creative and engaging ways than simply posting a link to a book’s retailer page. Publishers and agents, this post is written for authors. We encourage you to share it with your authors to help them build more engaging profiles. Jewel’s Never Broken Is Equal Parts Tell-All and Self-Help. I spent 14 of my first 18 years cloistered in a small, progressive private school in my leafy inner-city neighborhood in Chicago. 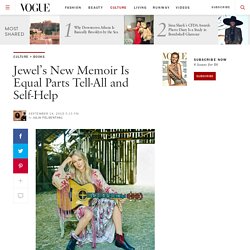 Three days a week the entire student body, squirming 4-year-olds alongside rowdy 18-year-olds, would gather in the auditorium for an assembly. Sometimes the stage would go to an alumnus, returning to offer us a glimpse into our futures; sometimes it belonged to seventh-graders lip-synching and writhing à la Britney Spears for a talent show. There was the time that Cornel West spoke, and another time when a local woman with AIDs told us about life with her disease. One day, I’m guessing I was in the fifth grade, a pretty young blonde woman appeared, guitar in hand, and played us a few songs from an album that hadn’t yet made its way to our tape decks.

Most memorably, she yodeled. Jewel’s Never Broken Is Equal Parts Tell-All and Self-Help. HOW ARE YOU FEELING TODAY? Hanya Yanagihara: Why she wanted to provoke readers with A Little Life. Hanya Yanagihara says every book should take big risks, and be experimental to a certain extent.

Hanya Yanagihara doesn't read reviews of her books. She's not on Twitter and doesn't own a mobile phone. Eighteen Months: On Where Art Comes From. Cameron Colwell on: the Sydney Writers' Festival, art, labour and Hanya Yanagihara. Hanya Yanagihara wrote all three-hundred thousand-something words of her Booker winner, A Little Life, in eighteen months. On hearing this number, at a seminar which opened the Sydney Writers' Festival, I was immediately beset with guilt: What had I done in the last eighteen months? Fumbled along at university, held two or three casual jobs, and made some progress on my novel, which clocks in, at the current draft, somewhere along the lines of a comparatively paltry ninety-thousand words.

I felt guilty, like I was inadequate, notwithstanding the absurdity of comparing my 20 year-old writerly self to the winner of one of the most prestigious literary prizes in the world. Arts Law : Case Study : Writing about Real People. Case Studies In mid 2010, Arts Law was contacted by an author who written an autobiographical book about her experience as a victim of domestic abuse.

I typed my early stories onto an Amstrad PCW, and cranked out my hard copy from a dot matrix printer in a freezing box room. Apart from two Arvon courses and a brief flirtation with a writers’ group, I knew no other authors with whom I could share ideas. It was only when my first novel, The Bad Mother’s Handbook, was about to appear in the shops that I ventured onto the world wide web to look at writing forums and join in discussion. Inside the literary magazine helping homeless writers be heard. How To Keep Writing: 5 Tricks To Sneak Past Perfectionism. Use early drafts as a springboard. Diving into the River: Screenwriting in the Digital Age. Three Line Tales. The truth is out there. The art of non-fiction.

Reading beyond our comfort zone. 5 Authors Who Took 5 Years—Or More!—To Write Their Books. Finding the Courage to Write About My Abusive Marriages. Birth vs. Battle. ‘You are now a prisoner of this world’: A conversation with Hanya Yanagihara — Kill Your Darlings Journal. Ethics in Storytelling (No 2) - Certainty Unleashed — Story Wise. Walter Benjamin Jots in His Notebook Every Book He's Read Since He Was 18. Now wait a minute: Writers needed for Procrastination research! How to Avoid Writer’s Arse. Choosing Your Words Carefully. Stop Waiting to Measure Up: Write Now. Why We Should Reconsider The Way We Review Books. "First sentences establish a contract with the reader about what is to come." Writing Maps – Writing Maps: Creative Writing Prompts and Ideas for Stories. Lessons Learned From Writing a Memoir or Two. Writing for a Cause. Are we letting baby media kill grandmother story? - Story Wise.

Using A Real Life Legal Case As Inspiration For A Novel. Writing It Forward. Novelist creates a dystopian world for girls, inspired by homegrown fundamentalism. ‘Articulating Unspeakable Trauma: a Review of... Advice for getting published in a scholarly journal (essay) Charlotte Wood’s Stella Prize acceptance speech. Writing Fiction, Building blocks. 5 Mistakes I Made Writing My First Novel. Writing About Sex (and the older woman)

The Connection With Readers. Fair use prevails as Supreme Court rejects Google Books copyright case. Writing About History: Truth or Dare. Lessons Learned From Writing a Memoir or Two. Reality Bits: Fact in Family Fiction. The Real Work: On writing one book — Kill Your Darlings Journal. Breaking borders: how to make the best bookshop in the world. Mentoring Women Writers. Show + Tell at Noted — rip publishing. Open Letter from Jackie French Theft and Failure of Economics 101. Being a Writing Coach. How to fill your back pocket with little stories - Story Wise. Doctors Writing about Patients. Writing Guidelines? Pick Your Own! Productivity Commission calls for free import of books, copyright shake-up. A Novelist’s Tale: Self-Publishing v. Traditional Publishing.

Legal Advice - Introduction. Arts Law : Article : Legal resources for writers and online publishing tips. Mentored to perform. Untitled. Messages. Sian Prior: In praise of over-sharing. Episode 401 — Hanya Yanagihara. Books to read when... - HerCanberra.com.au. Ros Barber is creating blog posts, a screenplay, a new novel. Bytestories.com - Sharing Stories Around the Digital Campfire. How to Avoid Writing Burnout. Authors and the Truth About Money - Ros Barber. Your NaNo Novel Is a Hot Mess! How to Edit Your Book - Helping Writers Become Authors. Women and Myths in Storytelling. The pencil and the damage done.

Black Inc. Publishing. Ben Walter on emerging Tasmanian talent, support for writers and bushwalking. WRITING: To Plot or Not? Why We Write About Ourselves: Some of Today’s Most Celebrated Writers on the Art of Telling Personal Stories That Unravel Universal Truth. Tara Moss, Rosie Waterland and Maxine Beneba Clarke on the power of the female memoir. Six Word Stories Omnibus: Volume Two. Plot Isn't Story. The Shocking Truth About Info Dumps. 7 Standalone Novels for Science Fiction Lovers. How to Write About Characters Who Are Smarter Than You. The simple truth behind suspenseful writing. Vulgar rhetoric. What makes a good review? Guest Post by Annabel Smith. Political correctness destroying poetry slams. Journalism and Fiction Writing. Literary Cities: Oregon.