Scientists Admit Everything They Know About Physics Is Likely Wrong. Scientists at CERN have announced that everything scientists thought they knew about physics may be entirely false, following the discovery of two new baryon subatomic particles. 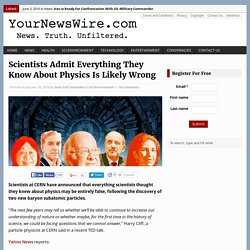 “The next few years may tell us whether we’ll be able to continue to increase our understanding of nature or whether maybe, for the first time in the history of science, we could be facing questions that we cannot answer,” Harry Cliff, a particle physicist at CERN said in a recent TED talk. Yahoo News reports: Equally frightening is the reason for this approaching limit, which Cliff says is because “the laws of physics forbid it.” Pledge to Publish Ethically - Commit to Ethical Publication. Save science! 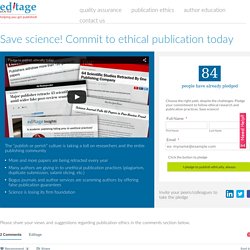 Commit to ethical publication today The “publish or perish” culture is taking a toll on researchers and the entire publishing community More and more papers are being retracted every year Many authors are giving in to unethical publication practices (plagiarism, duplicate submission, salami slicing, etc.)Bogus journals and author services are scamming authors by offering false publication guaranteesScience is losing its firm foundation Invite your peers/colleagues to take the pledge Please share your views and suggestions regarding publication ethics in the comments section below.

Top 10 Reasons Science Is Another Religion. Our World As a Biologist with a PhD in Neurosciences, I’m well aware that this is a controversial subject for both scientists and religious people alike. 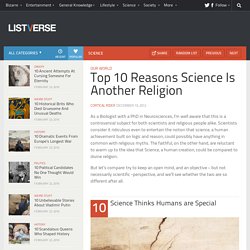 Scientists consider it ridiculous even to entertain the notion that science, a human achievement built on logic and reason, could possibly have anything in common with religious myths. The faithful, on the other hand, are reluctant to warm up to the idea that Science, a human creation, could be compared to divine religion. But let’s compare: try to keep an open mind, and an objective – but not necessarily scientific -perspective, and we’ll see whether the two are so different after all. Science Thinks Humans are Special It is understandable that religion might place man in the center of the universe – but for science to do so is inexcusable. There is absolutely no scientific reason why human understanding – above that of slugs, dolphins and monkeys – should be wide enough to encompass the universe.

Science Reveres Its Own Saints. Meet the Robin Hood of Science. By Simon Oxenham The tale of how one researcher has made nearly every scientific paper ever published available for free to anyone, anywhere in the world. 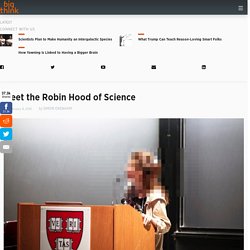 On the evening of November 9th, 1989, the Cold War came to a dramatic end with the fall of the Berlin Wall. Four years ago another wall began to crumble, a wall that arguably has as much impact on the world as the wall that divided East and West Germany. The wall in question is the network of paywalls that cuts off tens of thousands of students and researchers around the world, at institutions that can’t afford expensive journal subscriptions, from accessing scientific research.

On September 5th, 2011, Alexandra Elbakyan, a researcher from Kazakhstan, created Sci-Hub, a website that bypasses journal paywalls, illegally providing access to nearly every scientific paper ever published immediately to anyone who wants it. This was a game changer. So how did researchers like Elbakyan ever survive before Sci-Hub? This is the Catch-22. Einstein's gravitational waves: what are they, and what does their discovery mean? - Science. 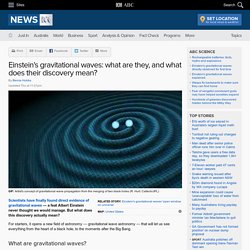 Hurt: Caltech/JPL) Scientists have finally found direct evidence of gravitational waves — a feat Albert Einstein never thought we would manage. But what does this discovery actually mean? For starters, it opens a new field of astronomy — gravitational wave astronomy — that will let us see everything from the heart of a black hole, to the moments after the Big Bang. What are gravitational waves? Einstein's general theory of relativity tells us that gravity is the curvature of space and time. The stronger the gravity an object has, the greater the deformation of space and time it causes. If scientists have indeed detected the to and fro movement caused by passing gravitational waves it will be a monumental achievement. Gravitational waves are caused when objects with strong gravity accelerate. The crumbling wall - Griffith Review. I GREW UP in an era when science had an aura of certainty and solidity: it was 'the true exemplar of authentic knowledge', as the eminent sociologist Robert K Merton put it. 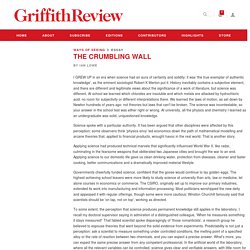 History inevitably contains a subjective element, and there are different and legitimate views about the significance of a work of literature, but science was different. At school we learned which chlorides are insoluble and which metals are attacked by hydrochloric acid: no room for subjectivity or different interpretations there. We learned the laws of motion, as set down by Newton hundreds of years ago: not theories but laws that can't be broken. The science was incontestable, so your answer in the school test was either right or wrong. At university, all the physics and chemistry I learned as an undergraduate was solid, unquestioned knowledge.

Science spoke with a particular authority. Governments cheerfully funded science, confident that the goose would continue to lay golden eggs.