A Career in the Circular Economy? Six main things you need to know about it. Government Quietly Admits to Weather Modification Program. 12th March 2016 By Ryan Cristian Guest Writer for Wake Up World As the United States moves farther away from the democracy it once pretended to be, the level of propaganda and indoctrination that the average American must wade through in order to get the smallest amount of Truth is staggering. 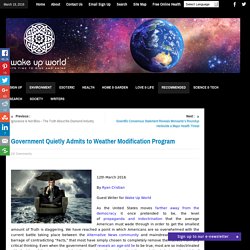 We have reached a point in which Americans are so overwhelmed with the current battle taking place between the Alternative News community and mainstream media, and its barrage of contradicting “Facts,” that most have simply chosen to completely remove themselves from any critical thinking. Contamination found at two Fire and Rescue training bases at Londonderry and Albion Park. Updated Chemicals believed to be linked to firefighting foam, which contaminated waterways in the Hunter region, have been discovered at two Fire and Rescue New South Wales training bases. 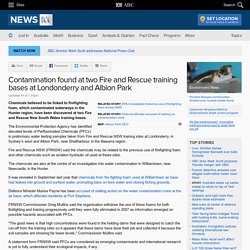 The Environmental Protection Agency has identified elevated levels of Perfluorinated Chemicals (PFCs) in preliminary water testing samples taken from Fire and Rescue NSW training sites at Londonderry, in Sydney's west and Albion Park, near Shellharbour, in the Illawarra region. Elwha: Roaring back to life. By Lynda V. 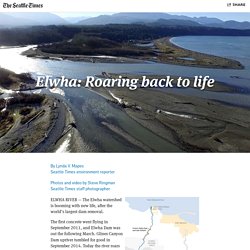 Mapes Seattle Times environment reporter ELWHA RIVER — The Elwha watershed is booming with new life, after the world’s largest dam removal. VersoBooks.com. "War, by creating a state of exception, has justified and encouraged a ‘brutalizing’ of relations between society and environment. 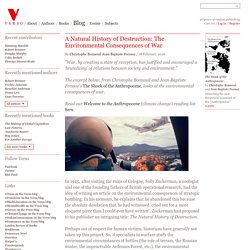 " The excerpt below, from Christophe Bonneuil and Jean-Baptiste Fressoz's The Shock of the Anthropocene, looks at the environmental consequences of war. Read our Welcome to the Anthropocene (climate change) reading list here. In 1945, after visiting the ruins of Cologne, Solly Zuckerman, a zoologist and one of the founding fathers of British operational research, had the idea of writing an article on the environmental consequences of strategic bombing. In his memoirs, he explains that he abandoned this because the absolute desolation that he had witnessed ‘cried out for a more eloquent piece than I could ever have written’. Zuckerman had proposed to his publisher an intriguing title: The Natural History of Destruction.Perhaps out of respect for human victims, historians have generally not taken up this project.

Against the Anthropocene by Daniel Hartley. The Power of Buying Less by Buying Better. According to a recent survey commissioned by the British charity Barnardo’s, a majority of women’s garments are worn a mere seven times before being pushed to the back of the closet or tossed into the garbage. 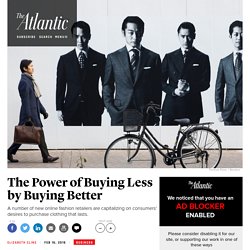 Combatting this wastefulness is at the heart of a growing number of clothing brands offering alternatives to so-called “fast fashion,” the trendy, throwaway method of selling clothes pioneered by companies such as H&M, and the cultural force to blame for the world’s overflowing and underutilized closets. Among the other startups positioning themselves as durable and ethical alternatives to throwaway fads are the online retailers Zady, Cuyana, Of a Kind, Everlane, and The 30 Year Sweatshirt. Mainstream fashion’s bad behavior is arguably opening the door for these more ethically-minded companies to flourish. Tom Cridland, a 25-year-old British designer and entrepreneur, launched The 30 Year Sweatshirt last summer to call to task fashion’s built-in obsolescence.

Pandora's box: how GM mosquitos could have caused Brazil's microcephaly disaster. These 'promiscuous' transposons have found special favour with genetic engineers, whose goal is to create 'universal' systems for transferring genes into any and every species on earth. 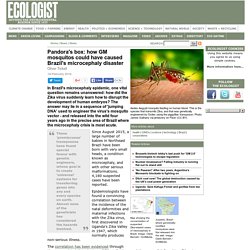 Almost none of the geneticists has considered the hazards involved. From Fleece Jackets to Your Food: The Scary Journey of Microplastics. There is No Environment: The Earth is our Extended Body. No coffin required: ACT plans to introduce natural burials. Posted Plans are underway to allow for deceased people in the ACT to be buried without a coffin. 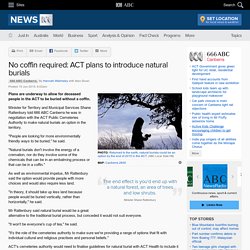 The end effect is you'd end up with a natural forest, an area of trees and low shrubs. 10 Life Hacks to Help You Cut Plastic Out of the Picture. By Kate Good / onegreenplanet.org Plastic is so ubiquitous that it can be found in or associated with nearly every tangible item in existence. 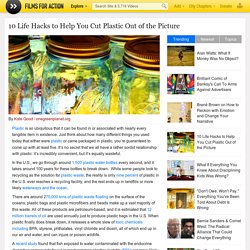 Just think about how many different things you used today that either were plastic or came packaged in plastic, you’re guaranteed to come up with at least five. It’s no secret that we all have a rather sordid relationship with plastic: it’s incredibly convenient, but it’s equally wasteful. In the U.S., we go through around 1,500 plastic water bottles every second, and it takes around 100 years for these bottles to break down. While some people look to recycling as the solution for plastic waste, the reality is only nine percent of plastic in the U.S. ever reaches a recycling facility, and the rest ends up in landfills or more likely waterways and the ocean. Government Confirms Earthquakes are Fracking Related.

The US Geological Survey released findings of a study which confirms, as many suspected, that increased seismic activity in eight states is due to fracking. 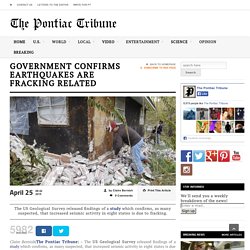 Claire Bernish(The Pontiac Tribune) – The US Geological Survey released findings of a study which confirms, as many suspected, that increased seismic activity in eight states is due to fracking. Since 2009, an abrupt spike in earthquakes, in areas previously considered stable throughout the central and eastern US, coincided with drilling related to the boom in hydraulic fracturing by the oil and gas industry. Forget Shorter Showers: Why Personal Change Does Not Equal Political Change. Would any sane PERSON think dumpster diving would have stopped Hitler, or that composting would have ended slavery or brought about the eight-hour workday, or that chopping wood and carrying water would have gotten people out of Tsarist prisons, or that dancing naked around a fire would have helped put in place the Voting Rights Act of 1957 or the Civil Rights Act of 1964? 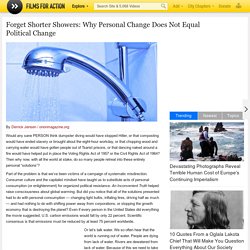 Then why now, with all the world at stake, do so many people retreat into these entirely personal “solutions”? Part of the problem is that we’ve been victims of a campaign of systematic misdirection. Consumer culture and the capitalist mindset have taught us to substitute acts of personal consumption (or enlightenment) for organized political resistance. An Inconvenient Truth helped raise consciousness about global warming. Fukishima Storage Facility Drone Video - Nuclear Waste in Bags Near Ocean. Drone footage captured by Ruptly shows millions of tons of radioactive soil and debris packed in black bags in a temporary storage site at Tomioka, Fukushima prefecture.

This incredible video shows the haphazard manner in which this temporary storage facility is stacking up nuclear waste in what appears to be less than 100 yards from the Pacific Ocean. Polar Bears Weakened by Pollution as Well as Warmth. In Russia’s Franz Josef Land and across its whole range the bear faces problems. (RM4Y via Wikimedia Commons) This Creative Commons-licensed piece first appeared at Climate News Network.

Videos, Voices & Words Inspiring Global Citizens. "There is an environmental movement and there is a social justice movement. If they could truly become one movement the transformation would be unimaginable. When a black child in Oakland winces at the thought of an ancient tree being cut down in northern California, and when an ex logger in northern California winces at the thought of a teenager, a black teenager in Oakland, being cut down on those streets, then we’ll know that day has arrived. " Could Western civilization's oldest ethical instructions of the Golden Rule hold acute relevance to our planetary environmental crisis?

Could restoring respect for human beings be the key to restoring the health of the planet? New Plastic ‘Zeoform’ Turns Hemp Into Almost Anything. What if todays plastics could be made from materials that were not only sustainable but non toxic? Today, our plastics are made from oil which means not only are we putting toxic chemicals into our atmosphere, but we are also filling our environment with products that cannot bio-degrade.

A new company out of Australia has created a promising new product called Zeoform and it is made only from water and cellulose take from hemp plants. This means their plastic is not only eco-friendly in production but is also biodegradable! As stated on their website: Wake Up Call: End the Nightmare of Consumption. Hidden beneath sleek, space-age screens and shining metal, the true cost of our gadgets lurks unseen… Have you ever felt like we're living through a nightmare of consumption? ‘Water Man of India’ Makes Rivers Flow Again. By Pramila Krishnan, Climate News Network. Study Reveals the Sad Truth: There Are Only Two Truly Intact Forests Left on Earth.

These 14 Photos Capture How Polluted China Has Become, And It’s Terrifying… From the trash-strewn Great Wall of China to oil-filled lakes, this land and its people are suffering from the effects of unsustainable industrialized living. In case you haven’t heard, China has declared war on pollution, as rates of environmental toxicity are beyond tolerable and are negatively affecting its population. This Traffic Jam Was Stuck In Belgium Forest For Over 70 Years. The Radioactive Man Who Returned To Fukushima To Feed The Animals That Everyone Else Left Behind.

The untold human suffering and property damage left in the wake of the Fukushima disaster in Japan has been well-documented, but there’s another population that suffered greatly that few have discussed – the animals left behind in the radioactive exclusion zone. Cursed by Coal: Mining the Navajo Nation. An Animated History of Taker Culture in 4 Minutes. You Should See What This Woman Sees Every Day. It Is Messed Up! 7 ways for Modern Society to Reconnect with Nature. I got a question recently which I spent a while pondering, and now am striving to try and put into words this idea that i’m having about the way that modern society and nature interact with each other. Hermann Hesse on What Trees Teach Us About Belonging and Life. This Hypnotizing Macro Timelapse Of Exotic Corals Will Take Your Breath Away. Plants Have Memories: The Spiritual Case Against Agricultural Manipulation. Vandana Shiva: Everything I Need to Know I Learned in the Forest.