When you can’t always get what you need. 15 September 2015 by researchwhisper. 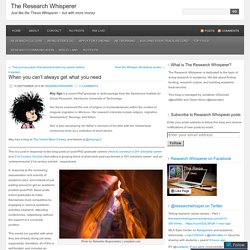 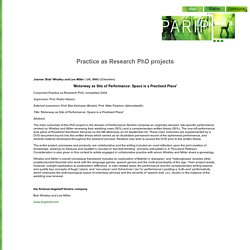 Unflattening — Nick Sousanis. The primacy of words over images has deep roots in Western culture. 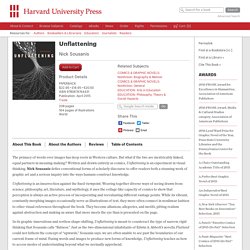 But what if the two are inextricably linked, equal partners in meaning-making? Written and drawn entirely as comics, Unflattening is an experiment in visual thinking. Nick Sousanis defies conventional forms of scholarly discourse to offer readers both a stunning work of graphic art and a serious inquiry into the ways humans construct knowledge.

One Giant Leap: A Review of Unflattening. Originally created as a doctoral dissertation for Teachers College at Columbia University, this PhD thesis-as-comic is the latest stop in a journey by its author to explore scholarly essays in comics form. 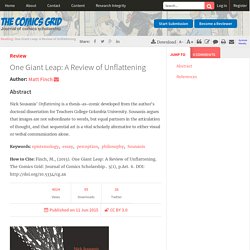 This quest began with Possibilities (2005), a shorter piece which helped secure Sousanis’ entry to Columbia’s doctoral programme. Unflattening demonstrates the viability of a comic book as doctoral scholarship in its own right, rather than a separate work requiring some accompanying critical paratext. The imprimatur of Columbia and Harvard University Press surely confers Unflattening with added respectability for general readers and critics from outside the comics world, yet Sousanis’ thesis also presents a defiant challenge to conventional Western thinking about words and images. It is a deep interrogation of comics as both an art form and a critical practice.

Feature: “Reflections on the arts & humanities doctoral thesis & training” In the UK, we are moving from a position in which the doctoral thesis, programme, research and examination are largely homogenous and singularly focused to one in which they are increasingly divergent, in order to meet a variety of external drivers. 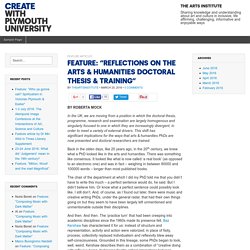 This shift has significant implications for the ways that arts & humanities PhDs are now presented and doctoral researchers are trained. Back in the olden days, like 20 years ago, in the 20th century, we knew what a PhD looked like in the arts and humanities. Theconversation. The Coalition announced in the budget that it would stop funding the Office for Learning and Teaching (OLT) – an organisation that that has helped to enhance learning and teaching in universities. 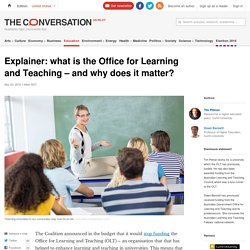 This means that from 30 June, the organisation will cease to run, and from July there will be no more grants and fellowships. The decision puts teaching innovation in our universities at risk. There is no replacement institute, despite the government promising this in last year’s budget. This is not just a problem for the higher education sector. It will contribute to significant losses to the wider economy that flow from having a highly skilled, professional workforce. It will also lead to missed opportunities for enhancing the educational experience of students.

How long does it take to do a PhD. Academic work can be largely autonomous, so how should you spend your PhD time? 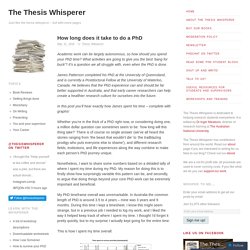 What activities are going to give you the best ‘bang for buck’? It’s a question we all struggle with, even when the PhD is done. James Patterson completed his PhD at the University of Queensland, and is currently a Postdoctoral Fellow at the University of Waterloo, Canada. He believes that the PhD experience can and should be far better supported in Australia, and that early career researchers can help create a healthier research culture for ourselves into the future. Free the Public Universities. Over the last decade, the fate of America’s public universities has commanded considerable attention. 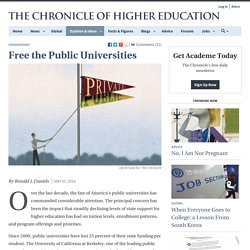 The principal concern has been the impact that steadily declining levels of state support for higher education has had on tuition levels, enrollment patterns, and program offerings and priorities. Since 2000, public universities have lost 25 percent of their state funding per student. The University of California at Berkeley, one of the leading public research universities in the nation, now receives only about 13 percent of its budget from state appropriations, compared with about 50 percent a few decades ago. New paper suggests open-minded researchers produce higher-quality research. Many scientists take a certain pride in the objective nature of their work. 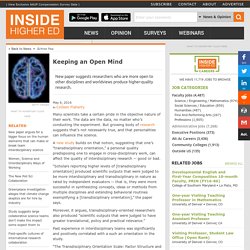 The data are the data, no matter who’s conducting the experiment. But growing body of research suggests that’s not necessarily true, and that personalities can influence the science. Are You Being Rigorous or Just Intolerant? I always took pride in being "a hard teacher. 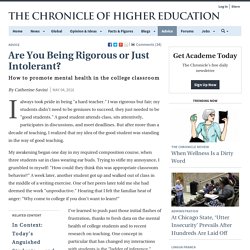 " I was rigorous but fair; my students didn’t need to be geniuses to succeed, they just needed to be "good students. " A good student attends class, sits attentively, participates in discussions, and meet deadlines. But after more than a decade of teaching, I realized that my idea of the good student was standing in the way of good teaching. A flow diagram guide to academic gatherings – Errant Science. The Top 5 Faculty Morale Killers. For nearly two-thirds of my 30-year career in higher education, I have served as a middle manager of one sort or another: department chair, dean, program director. For the other third, I have been middle-managed. Of course, even as a low-level administrator, I had plenty of people above me telling me what to do.

Mary Beard: ‘The role of the academic is to make everything less simple’ The problem with Roman history, says Mary Beard, is that “it’s just irredeemably blokeish. It’s conquests, and if it’s not conquests, then it’s engineering, and if it’s not engineering then it’s Roman military tactics. You don’t see the child miners or the slaves, and you don’t think: ‘How the hell would you get that column from Egypt to Rome?’” Beard lives in Cambridge, where she is professor of classics, a fellow of Newnham College since 1984. QSR International. 18 April 2016 - BY Lee Fallin Lee Fallin works as a Library Skills Adviser (Learning Developer) at the University of Hull.

Here he shows us how EndNote and NVivo can streamline the process of writing papers, assignments and research articles. While the use of NVivo for research is well established, I often find students, researchers and academics focus too much on its use as a qualitative data analysis tool. I find NVivo is an invaluable tool in my research arsenal and I want to talk about how I use a combination of NVivo and EndNote for every assignment, paper or article I write.

Using both of these tools together, it is easy to rapidly collect journal articles, interpret them and get on with writing. QSR - Hone your NVivo skills with literature reviews. 25 July 2014 - IN coding, EndNote, framework, literature, matrices, matrix, NVivo, query, reviews, Scrivener, search, text There are some excellent resources available about using NVivo for your literature reviews. Here, I describe some ways in which I use NVivo for literature reviews, which you might find useful. I believe working with NVivo during literature review is an excellent way to manage research, a practical way to learn and practice with NVivo, honing practical skills. Book argues faculty members should actively resist 'culture of speed' in modern academe. In 2013, the jobs website CareerCast named university professor the No. 1 least stressful job, unleashing a torrent of criticism that only grew after Forbes picked up the ranking.

Professors -- those with tenure and without -- said the study ignored the changing dynamics of the university, namely the increasingly administrative nature of academic work, the emerging student-as-customer model, unrealistic research expectations and 24-7 contact with colleagues and students via email. QSR International. Stop Students Who Cheat Before They Become Cheating Professors. It happened again. Academic CV of Failures – a motivational lesson. A fundamental rule of writing a resume rests on the unspoken prescript of omitting anything that didn’t go as planned or actually didn’t worked out.

‘Silly, Sanctimonious Games’: How a Syllabus Sparked a War Between a Professor and His College. New MLA Handbook wants to make citing sources from a variety of media much easier. In fairness to the Modern Language Association and other makers of popular academic style guides, citing sources -- if always tedious -- was once relatively straightforward: journal articles like this, books like that. Three principles for an effective writing system (essay) Everything that I have ever read about having a successful writing practice would suggest that I am doing it wrong. Creating the literature review: research questions and arguments.

Arnold Wentzel teaches economics, teaching methodology in business, and also research writing skills across social science disciplines at the University of Johannesburg. Ban academics talking to ministers? We should train them to do it. How to have an academic baby. Academics talk a lot about the impact of family on academic careers and opportunities. Writing a publishable literature review paper – four options. Home-Made Aphid Trap, Just use an upside... - The Duchess of Cansalot. Dark thoughts: why mental illness is on the rise in academia. The Free-Speech Fallacy. Why one woman stole 47 million academic papers — and made them all free to read. Librarians Find Themselves Caught Between Journal Pirates and Publishers. Researcher illegally shares millions of science papers free online to spread knowledge. Building a Bridge Between Engineering and the Humanities. Pledge to Publish Ethically - Commit to Ethical Publication.

What makes a truly great employee? Female political scientists start website to combat bias against women in academia. Students Aren't Coddled. They're Defeated. How to use email more effectively (essay) New book discusses self-stratification among black academics. Mapping Student Debt. Will my children be damaged by my PhD? It’s OK to Quit Your PhD. Are you an ‘academic superhero’? How Right-Wing Billionaires Infiltrated Higher Education. The Loneliest Orientation Table. PhD Talk: I am Katherine Firth and This is How I Work.

The Valley of Shit. How to follow up with underrepresented faculty who decide to leave your institution (essay) Judy Wilyman, PhD: how to understand attacks on a research student. The Writing on the Slides. Bad Writing by Administrators. 9 Things That Make Good Employees Quit  New book reveals how elite Ph.D. admissions committees review candidates. Going Down Swinging. Poor citation practices are a form of academic self-harm in the humanities and social sciences — Advice for authoring a PhD or academic book. A Lecture From the Lectured. The loneliness of the long distance learner. Academic Job Hunts From Hell: Inappropriate, Hostile, and Awkward Moments. Bad PhD supervisors can ruin research. So why aren't they accountable?

The Professor Is a Drag Queen. Can the Student Course Evaluation Be Redeemed? College President: ‘This Is Not a Day Care. It’s a University!’ – The Ticker. Career Advice From an Oldish Not-Quite Geezer. Hazel Rowley: "Universities are losing on points" Feel like a fraud? There’s an awful cost to getting a PhD that no one talks about. Academic publications to become less important when funding university research.